Arnold Schwarzenegger hit the streets via bicycle in Santa Monica on May 10.

They Walk the Dog!

Diane Keaton took her pup for a stroll in Los Angeles on May 1.

Anthony Anderson had his hands fill at the post office in Bel-Air on April 29.

Brooke Burke put her chef skills to the test — apron and all — using an outdoor hibachi grill in Malibu in April.

Heidi Montag and Spencer Pratt were spotted stealing a kiss while out and about in Malibu on April 26.

Ashley Greene was caught paying the meter in West Hollywood on April 16.

They Go on Rides!

Ed Westwick and girlfriend Tamara Francesconi enjoyed their time at the amusement park Thorpe Park in the U.K.

Mariska Hargitay and Ice-T took a quick snap during a filming break on the set of Law & Order: SVU in New York City.

They Serve Their Community!

Kelly Osbourne handed out necessities at a food distribution event in Los Angeles on April 10.

They Pick Up Pizza!

Brad Paisley was spotted picking up five boxes of pizza in Montecito on April 11.

Haylie Duff couldn’t contain her excitement before she snacked on Mrs. T’s Pierogies on April 11.

Sarah Jessica Parker is no stranger to getting around New York City in a yellow taxicab.

They Pay the Meter!

Alessandra Ambrosio put money in the parking meter in Los Angeles on April 2.

They Push Their Own Grocery Cart!

They Laugh With Friends!

Angelina Jolie and Brad Pitt‘s eldest son, Maddox, was all smiles at lunch with a friend in West Hollywood on April 5.

They Walk the Dog!

Gavin Rossdale was all smiles as he walked dog Chewy on April 5.

They Go on Picnics!

They LOVE Their Dogs!

Lisa Vanderpump let her pup drink out of her water glass while dining at Pump in West Hollywood on March 29.

Rihanna was spotted leaving Bristol Farms with a bag of groceries on March 29.

They Pick Up Their Own Dry Cleaning!

Lily Collins was spotted picking up her laundry in West Hollywood on March 31.

Denzel Washington embraced a pup on the set of A Journal for Jordan in New York City on March 25.

Winnie Harlow sipped on a cocktail during a dinner with friends in Beverly Hills on March 22.

They Pay for Parking!

Ariel Winter stocked up on root beer in Los Angeles on March 15.

They Take Out the Trash!

Vanderpump Rules alum Jax Taylor was spotted bringing his trash bins to the curb on March 16.

Fifth Harmony’s Ally Brooke didn’t waste any time applying the sunscreen she purchased at CVS in Los Angeles on March 21.

They Get Distracted by Dogs!

Rachel Brosnahan stopped to pet a pup on the set of The Marvelous Mrs. Maisel in New York City on March 10.

Jon Voight brought a book to a solo dinner at the Beverly Glen Deli in Bel-Air on March 8.

Chrissy Teigen purchased her own groceries at Bristol Farms in California on March 9.

Drew Barrymore snapped a selfie with a bowl of Frosted Mini-Wheats on March 29 in honor of National Breakfast Week.

They Grab The Morning Paper!

Wearing a robe and holding a coffee in her hand, former Daily Pop cohost Catt Sadler started her day reading the news in L.A., March 2.

Selling Sunset’s Christine Quinn showed off her growing baby bump while at the supermarket with husband Christian Richard in L.A., March 2.

Yes, even Kylie Jenner fills up her own fuel tank! Looking stylish (as always), the mogul made a stop at a self-service station in Bel Air, California, February 22.

Winnie Harlow treated herself to a massage during a recent getaway in Cancun, Mexico, February 22.

Fit Brooke Burke has said her workouts and healthy diet are “a big part of my lifestyle.” (Pictured in Malibu, February 14)

They Indulge In Sweets!

Sugar high! Salma Hayek sipped on a slushy on February 12.

Ariel Winter stocked up on her favorite goodies during a recent trip to Trader Joe’s in L.A., February 15.

Carrie Underwood took some time to stretch out her muscles before a workout, February 9.

They Pump Their Own Gas!

Clad in a cardigan and slippers, Jax Taylor filled up his Jeep’s fuel tank in Hollywood, California, February 4.

They Watch Where They’re Going!

Olivia Palermo made sure not to slip while running errands after a snowstorm in NYC, February 3.

They Have Socially Distanced Gatherings!

Meg Ryan safely met up with her pals in the park for a celebration in Santa Barbara, California, February 2.

They Take Out The Trash!

“I may be bald but I know a thing or two about hair,” Dwayne “The Rock” Johnson joked of untangling 2-year-old daughter Tiana’s tresses on January 23.

Courtesy of Dwayne “The Rock” Johnson/Instagram

They Walk The Dogs!

Gavin Rossdale stepped out with his beloved Pomeranian, Chewy, and a new furry companion in L.A., January 27.

The secret to Bachelor Matt James’ fit body? Working out and chowing down on nutritious meals — like an acai bowl in Jupiter, Florida, January 24.

A marvelous donation! Rachel Brosnahan partnered with Amazon to support one of her favorite charities, Covenant House, in NYC.

Who needs to call a roofer when there’s Ryan Phillippe? The actor did some house repairs on January 14.

They Quench Their Thirst!

They Walk Their Dog!

Helena Christensen stepped out with her beloved Australian shepherd, Kuma, in NYC on January 11. 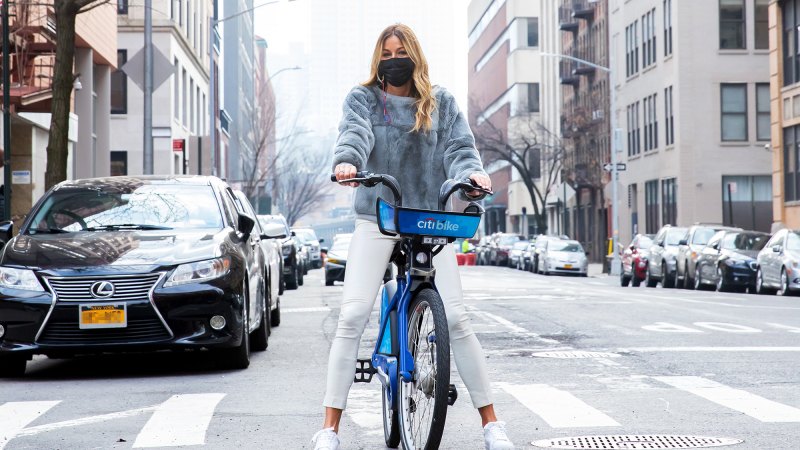 They Cycle In The City!

Kelly Bensimon got where she needed to go via Citi Bike in NYC, January 13.

Between carrying a huge basket and walking Kuma, Justin Theroux certainly had his hands full while out and about in NYC, January 5.

Sticking to a healthy 2021, perhaps? Wells Adams broke a sweat during an afternoon job in L.A., January 4.

John Legend and Chrissy Teigen went for a hike while on a tropical getaway in St. Barts, December 22.

Katie Holmes’ hands were full after hitting some stores in NYC, December 22.

A pregnant Emily Ratajkowski sipped on a beverage during a beach day in L.A, December 20.

Renée Zellweger was spotted schlepping a load of packages before treating herself to a smoothie in L.A., December 18.

Chef Sandra Lee was seen taking out the trash at her new place — just days after moving out of the N.Y. home she shared with her ex, Gov. Andrew Cuomo, in Malibu, December 18.

Matt James hit the golf course ahead of the Bachelor premiere in Jupiter, Florida, December 19. 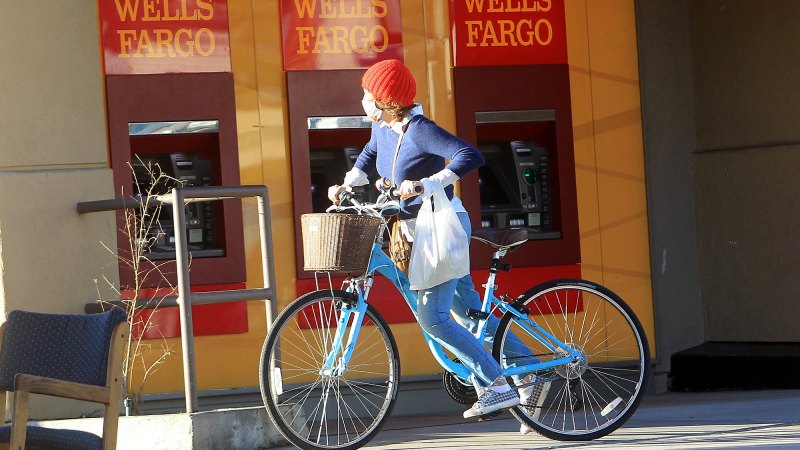 They Go To The Bank!

Molly Shannon hopped on her bike after withdrawing cash from the ATM in L.A., December 18.

A chic Padma Lakshmi rode the subway like a true New Yorker in NYC, November 29.

They’re Glued To Their Phones!

Jennifer Lopez snuck in a bit of screen time while Christmas shopping in NYC, December 8.

Emily Ratajkowski displayed her growing baby bump during a hike in L.A., November 27.

Mom-to-be Emma Roberts did some shopping at Ikea in L.A., November 18.

After a trip to the mechanic, Casey Affleck picked up two bundles of logs in L.A., November 17.

Shia LaBeouf didn’t let his arm injury stop him from going on a jog in Pasadena, California, November 11.

They Pay The Meter!

While out and about, Ariel Winter’s hands were full with a giant roll of bubble wrap and packaging tape in L.A, November 8.

No chauffeur for him! Despite being worth a reported $400 million, Arnold Schwarzenegger is perfectly fine with getting behind the wheel in L.A., November 4.

Chris Pine starts a long day on set with a cup of java in L.A., November 4.

Offset handed out free food to voters while they waited on line to cast their ballots in Atlanta, November 3.

Lily Allen gets hot drinks and baked treats to go in NYC, November 2.

They Take Out The Trash!

Jax Taylor has no problem doing his share of the household chores while wife Brittany Cartwright is pregnant. (Pictured in L.A., October 26)

They Schlep Their Stuff!

Claire Danes’ hands are full as she hauls a large box of diapers on a trolly and carries a package in NYC, October 22.

Rebel Wilson has no problem filling up her own tank in West Hollywood, October 20.

Simon Cowell takes a sip during a family shopping trip in L.A., October 18.

Katie Holmes and Emilio Vitolo Jr. head to their destination via subway in NYC, October 15.

No fancy florist for Chrissy Teigen! The model picks up a pretty plant from Ralphs supermarket instead in L.A., October 20.

They Ride The Train!

Jaimie Alexander forgoes a taxi and takes the subway like a true New Yorker. (NYC, October 14)

Tyler, the Creator grabs lunch with a pal in West Hollywood, October 6.

They Snack On Treats!

Liev Schreiber double dribbles — literally — while taking on son Sasha, 13, during a game of basketball in NYC, September 30.

They Walk Their Dogs!

They Go To The Hair Salon!

“I love to bring Santi into the kitchen with me,” Eva Longoria says of cooking with her 2-year-old son. (September 29)

Dominic Cooper takes his two-wheeler for a spin around town in London, September 21.

What a big shot! Gavin Rossdale has a mean swing in L.A., September 23.