Squid Game has taken the world by storm, quickly becoming the most popular Netflix show in the streaming giant’s history.

A whopping 111 million users have hit play on the South Korean series in its first month, beating the 82 million record previously held by Bridgerton.

The thrilling drama – created by Hwang Dong-hyuk – follows desperate individuals as they compete to win billions by taking part in a deadly competition.

If they manage to beat their fellow competitors, they can win a cash prize of 45.6 billion won – however, if they lose, they will meet a gruesome end.

As real Squid Games start taking place across the world – minus the grisly deaths of course – many fans are wondering just how much 45.6 billion won is in pounds and dollars.

We have answers right here…

What is the Squid Game prize money in GDP?

In the show, 456 debt-ridden people are chosen to take part in the games.

Each player is worth one hundred million won, amounting to 45.6 billion in total.

More cash is added to the pot every time a player dies, enticing the competitors to push on, while persuading them to turn on one another.

The South Korean won is the official currency of South Korea, with one won equalling 0.00062 GBP.

While that may not sound as much as 45.6 billion, it is still a massive sum of money: would it be enough to convince you to enter the games? 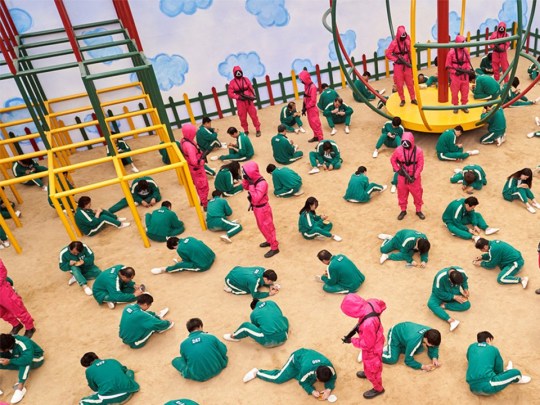 How much would it take for you to enter the Squid Game? (Picture: Netflix)

For viewers watching the show in the US, the figure is slightly different.

In any currency, there is a lot of money on the line for the players of Squid Game, a prize many contestants are willing to die – and kill – for.

Squid Game is available to stream on Netflix now