It’s the day that Spotify users have been waiting for – as Spotify Wrapped 2021 is released on the streaming platform.

Wrapped – which is now available – allows users of the service to take a look back down musical memory lane, as it taps into their listening habits over the past year.

But just what is Spotify Wrapped? And if you want to remind yourself exactly what’s been on your musical radar this year, then just how do you go about getting it?

What is Spotify Wrapped?

Spotify Wrapped gives fans an insight into what they’ve been listening to and loved over the past year, from January up until the end of November.

As well as giving you a definitive list of your Top 100 most-listened to songs of the year, it will tell you things like the first song and first new artist that you listened to in 2021, how many minutes you spent listening to things on Spotify this year, and which artist you listened to the most.

Oh, and they’ll also reveal who the most listened to artists of the year have been both in the UK and worldwide, as well as the most streamed tracks and albums both at home and in the rest of the world.

This year you’ll be able to enjoy some added bonuses – including your very own ‘movie soundtrack’, which will feature some of your favourite songs and artists of the year, and will feature in key ‘scenes’ such as your opening titles and your ‘training montage’.

In addition, around 170 artists have recorded thank you videos for their inclusion in people’s Spotify playlists – and you could be on course to receive one of these if any of the acts who have recorded them land in your Top 100.

To access all this, you just need to open Spotify and go to the Wrapped page or go straight to the Spotify Wrapped website.

Who were the top artists on Spotify in 2021? 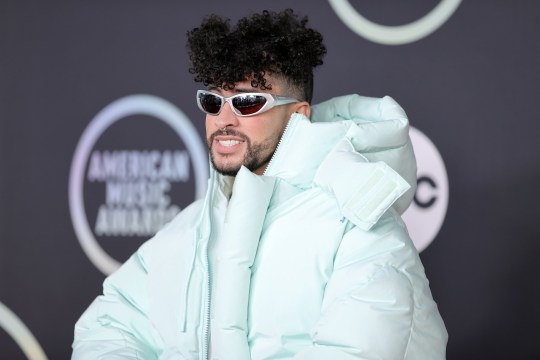 It’s been a good year on Spotify for Bad Bunny (Picture: Getty Images)

For the second year running, the most popular streamed artist across the world was Puerto Rican rapper Bad Bunny, followed by Taylor Swift, Drake, BTS and Justin Bieber

Drake topped the rankings in the UK, with Taylor Swift runner-up – with the top five completed by Ed Sheeran, Justin Bieber and rapper Juice WRLD.

Meanwhile, the former Disney Channel star’s album Sour was 2021’s most streamed record across the world.