The Spider-Man: No Way Home trailer is officially here and it’s done absolutely nothing to dispel the rumours that Tobey Maguire and Andrew Garfield are returning.

Despite outright denials from current Peter Parker actor Tom Holland and The Amazing Spider-Man star Andrew (Tobey has stayed very quiet), fans are convinced that the actors will make their return.

It would certainly fit in the narrative of the film.

The epic new instalment will follow Peter after the world has seen him unmasked as Spider-Man.

Desperate, he calls on Doctor Strange (Benedict Cumberbatch) to help, but something goes very wrong and results in enemies from across the universe arriving to haunt him. But if villains from other universes can get to him…surely so can heroes?

Of course, absolutely nothing is confirmed and Tobey and Andrew made no direct appearances in the trailer. But fans have spotted some suspicious moments.

Even if they don’t make a direct appearance, Tobey and Andrew are clearly going to be referenced in the new movie due to the return of their villains.

But, of course, Alfred’s Doc Ock, who hails from Tobey’s era, doesn’t recognise Tom’s Peter, telling him in the trailer: ‘You’re not Peter Parker’.

It’s a huge moment to tease in the trailer, and it’s definitely not passed fans by.

While Doc Ock references Tobey, towards the end of the trailer we get a pretty clear Andrew reference, when Zendaya’s MJ is seen falling in slo-mo, with a hand reaching for her.

Many fans are convinced it’s a reference to the heartbreaking scene in The Amazing Spider-Man 2, where Emma Stone’s Gwen Stacy silently falls in slo-mo, with Andrew’s Peter unable to reach her.

In the new trailer, we’re not shown who actually reaches for MJ, with plenty sure that it’s Andrew’s Peter taking her hand.

Surely there are too many similarities for it to be a coincidence.

Is someone edited out of the trailer?

Some are convinced that Andrew and Tobey don’t appear in the trailer for a very specific reason – they’ve been edited out.

Marvel has been known to edit some shots in its trailers to avoid spoilers, including in the run-up to Thor: Ragnarok and Avengers: Endgame, so could this tactic be in play again?

At one particular moment, Lizard doesn’t seem to be going for, or even looking at, Tom’s character, instead jumping at something below him in the shot. In the same shot, Lizard appears to flinch backwards – as if he’s been punched or kicked.

Has Andrew been edited out?

In terms of pure speculation, it seems a little unlikely to have Tom’s Spider-Man alone in a fight against five villains. And, if Andrew and Tobey are set to appear, there’s no doubt we’d be treated to a trio of Spideys in an epic fight scene like this one.

Even Doctor Strange is left in panic in the trailer (Picture: Sony)

As universes collide in the trailer, Doctor Strange is in utter panic as he can’t stop it from happening.

While there’s not much to back this up, fans are convinced that this is the moment we’ll see Tobey and Andrew on-screen.

What have Andrew, Tobey, and Tom said? 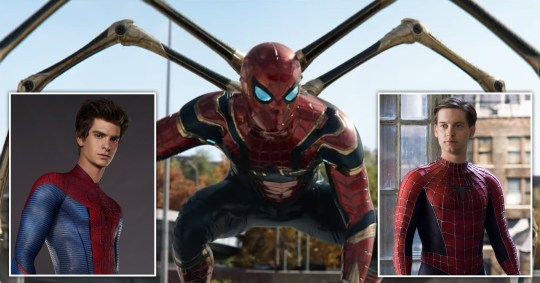 Andrew has consistently denied the rumours that he will return in No Way Home (honestly, this man is fighting for his life out here).

Most recently, he said on the Today Show: ‘Listen, I am not in the film, I love Spider-Man, I always have. I was so happy to have played the part and I’m so excited to see what they do with the third one just like you guys are.’

Tom, meanwhile, has said: ‘It would be amazing if they were because they haven’t told me that yet and I am Spider-Man and I’ve read the script from the beginning to the end. So it would be a miracle if they could keep that from me.’

He recently added to Total Film: ‘People don’t believe me when I say that [Tobey and Andrew] are not coming back. But people are going to have to believe me at some point.’

Sorry Tom, that point has not arrived just yet.

As for Tobey? He’s doing the most Tobey Maguire thing ever and seemingly just chilling and keeping away from the rumours. Somehow, he’s managed to not address it at all.

Spider-Man: No Way Home is released on December 15 in the UK.