As soon as I was let loose on Liberty City in the definitive edition of Grand Theft Auto 3, I took myself over to the car shop next to 8-Ball’s yard, smashed through the glass window, and took the Banshee. Jumping into Grand Theft Auto: The Trilogy and returning to this ritual from my youth felt special. It took me right back to when I was a pre-teen playing these brilliant games on a tiny TV at my friend’s house. Away from the watchful eyes of concerned parents, I was once again tearing at the seams of a Grand Theft Auto game in a tank, layering on the cheats that are, as it turns out, burned into my muscle memory.

This was most of my experience with the remastered trilogy as I dug into Vice City and San Andreas over the course of this past weekend. I would engage with my nostalgic habits, look upon old vistas with a new lick of paint, and admire how quaint these old games feel in 2021.

At first, the GTA I felt compelled to soldier on with was San Andreas – it holds up best and was the only game that I wasn’t playing catchup with as a youngster, so the memories are extremely fond. Like many children of the era, I remember begging my parents to get it for me at launch, then cracking open the black box and looking for bigfoot with my mates. It was an absolute blast to replay its opening hours, stumbling onto missions and pickups I remembered from the old days. However, it soon became more complex once I ventured beyond the rose-tinted Grove Street sandbox.

Over the course of my playtime, I found plenty of disappointing problems in this supposedly definitive collection. From wonky animations to asset clipping and tons of weird physics, the supposedly definitive GTA Trilogy feels held together precariously. At the moment, it feels more like a work in progress, an ambitious package that will be good in a few months time once the developers iron out the kinks. But oh boy, are there some kinks to deal with here – all you have to do is scroll through any social media platform to find the worst ones. I’ve had some properly weird bugs myself, some of which seem like obvious fixes, and others that are totally absurd nightmare fuel, like CJ’s head turning into a twitching Lynchian nightmare when he crouches and looks behind him, complete with jackhammer sound effects.

Let’s talk about what works first. You now have user-friendly wheels for radio stations and weapons, improved aiming tech and an enhanced waypoint system. These mechanical changes make the games much easier to enjoy, especially on a modern console like the PS5. The DualSense vibration is great too. However, the visual upgrades feel like they’re doing more harm than good. Recreating the textures haphazardly has created typos and ruined several jokes, and some of the character models look downright ridiculous. The audio mixing isn’t great either, with some characters sounding fantastic and others delivering lines like gravel monsters.

Even the graphical modes make you choose between frame rate and fidelity, when it would have been much nicer to just have both at once. Unfortunately, this is just a deeply inconsistent collection of remasters, and the fleeting nostalgic fun barely redeems it.

There are these beautiful moments when you’re driving around in the city and the lighting effects make it feel like what you imagined these games looked like when you were a kid, but this illusion can quickly be shattered by broken textures, bugs, and questionable art style changes. The cartoon character reskins cut away at the Rockstar charm, and the improved draw distance can muddy the exploratory atmosphere. Being able to see the forest for the trees is more damaging to these old games than you might think, given how gigantic and limitless they felt decades ago. I’ve had fun with GTA: The Trilogy because deep down they are still great, but I also feel so confused and disappointed about the approach, so much so that I was compelled to go back and check out the original games on PC to make some comparisons.

I realised while doing this that I am one of the lucky ones. I bought GTA 3, Vice City and San Andreas on Steam many moons ago before they were delisted ahead of the Definitive Edition’s release.

Booting up the Steam version of GTA 3 was pretty seamless. I quickly changed the resolution and settings to fit my 1440p screen, and I had the game running at a high frame rate. The world felt grotty in the best way, with its art direction maintained. It felt good to play too and had some features that weren’t in the Definitive Edition, like the cinematic camera and a few extra cheats. Some radio station songs have also understandably been cut from the new Trilogy, likely due to licensing troubles. I definitely prefer the original GTA art styles as they still pull a lot of the weight, even if the Definitive Editions feel more accessible and easier to play.

The Steam version of GTA San Andreas also ran well and felt pretty good at first, though, I did have to redefine the controls for my gamepad and eventually ran into screen tearing and crashing issues. Even so, I’m sure a couple of community mods could smooth it all out if I wanted to replay it. There’s obviously a good reason on the development side, but if the team wasn’t going for a full remake, why didn’t Rockstar just update or port these versions and leave them intact? 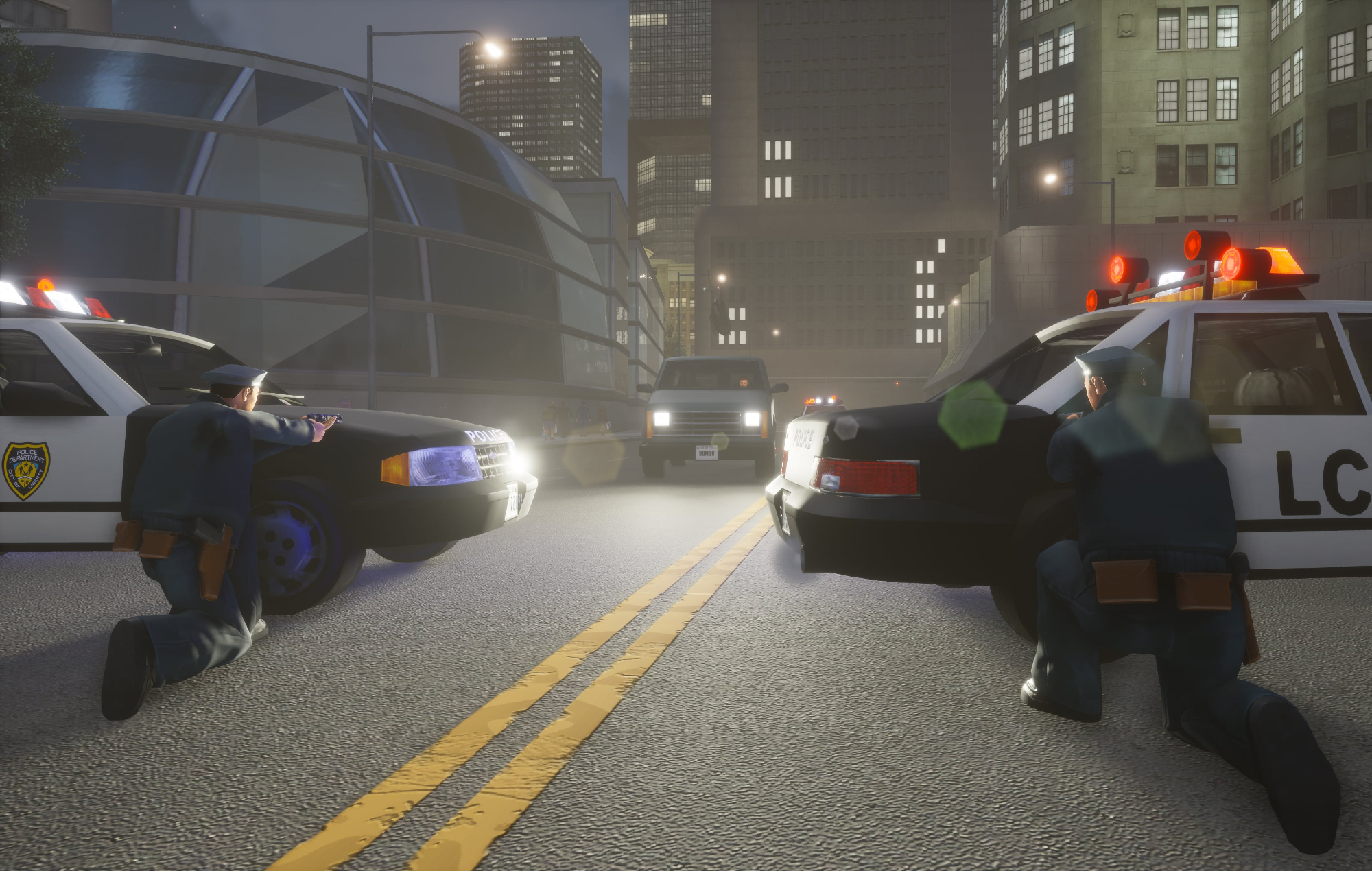 What was so wrong with the original games that Rockstar decided to delist them and change how they look so dramatically? This seems to be the main issue for fans, myself included. I’m sure this may have summoned some kind of game design hell, but it would have been really nice to have the option to flip back and forth, Halo Anniversary and Monkey Island Special Edition style, between the old textures and the new. Crafty modders are already doing damage control on effects like the rain in the new version of San Andreas, which has been creating visibility problems for players and making missions even more difficult than they were in the original.

Observing what the community was already doing, taking their input on board and leading from there may have been a more useful approach, it seems. Millions of people love these games and would be able to look past their old, baked-in problems. But I don’t think the same people are able to look past new problems that have surfaced with GTA: The Trilogy, at least without some of their nostalgia being ruined.

I’m sure the developers are working incredibly hard on updates right now, but the state of these games at launch, for £55, is self-evident. They needed much longer in the oven, and currently feel rushed out the door. I think for many people, myself included, it’s just not what I expected three of the most influential and beloved games of all time to look like when given the remaster treatment.

Regardless, a well-designed open-world game is never a bad experience to play, and you can have plenty of fun with the GTA Trilogy, especially if you’re new to these games and you don’t have any nostalgia for the originals. But by delisting the originals, I guess the choice has been made for you if you’re desperate to check them out, as this is the only way to play them now if you aren’t prepared to bust out the old consoles. However, I would recommend that you wait for some updates and patches to come through before you commit to the purchase. I think the GTA Trilogy can eventually be great, but it’s going to take listening to some serious community feedback to get there. It’s a crying shame because there are three brilliant games hiding under the hood, they just needed to be coaxed out and handled with much more care.

GTA: The Trilogy – The Definitive Edition feels far from the ultimate version of these great games right now. Three magnificent open-world adventures have been made available on modern consoles, and they feel much better to play than ever thanks to a set of mechanical tweaks, but the visual overhaul has summoned scores of new problems that make the package difficult to recommend in its current state. Newcomers without nostalgia could still find a lot to love in this collection, but you’d be much better off waiting for patches and updates that will hopefully bring the Trilogy up to scratch so that it can reflect the enduring brilliance of the source material.