Trust Saturday Night Live to turn something precious beyond words like The Mandalorian’s Baby Yoda and turn it into a nightmare-inducing fever dream.

Screaming onto the panel with an earring, Yoda soon starts talking about his new bestie Jake Paul and his upcoming smackdown with Guardians Of The Galaxy’s Baby Groot.

Demanding he get more dance sequences from the writing team, Baby Yoda continues to take over from Michael as he starts hogging the camera time.

‘To my fans, I love ya’ll – for real, for real. But you know, some of ya’ll could maybe take it easy on those DMs though,’ he tells the camera.

‘I read some of these and I’m like “dang, you want to do what to Baby Yoda? That’s interesting”.’ 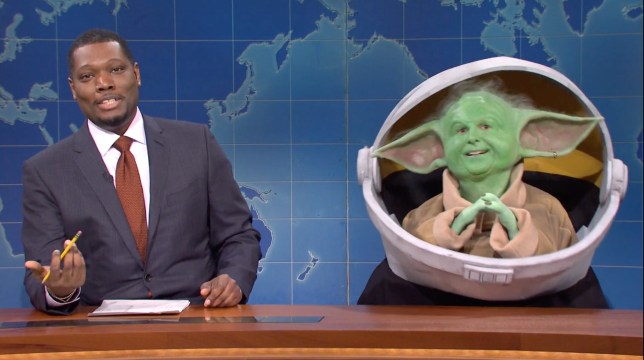 Michael Che was joined by this new creepy version of Yoda (Picture: NBC)

He then plugs his new line of cannabis products, declaring that’s ‘why he’s so green’.

Ending the segment, Yoda launches an attack on a rival franchise cutie – starting a beef with Baby Groot.

‘Baby Groot – we ain’t friends. I know you still talking smack about me, and I just want to say your TikToks are cringe, bro,’ he warns.

Now that’s a boxing match we’d kind of both love and hate to see. 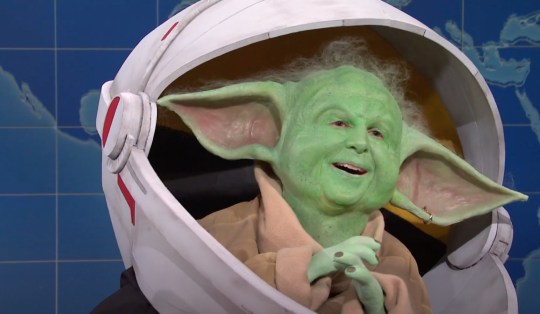 The Mandalorian returned this week with Mando (Pedro Pascal) and Baby Yoda off on a new adventure in Tatooine, meeting new friend Cobb Vanth (Timothy Olyphant) on the way.

The final moments of the show also gave hope to fans – with a mysterious figure seemingly promising the return of an old favourite from the main franchise.

So Baby Yoda may have to lay off the DMs and Twitter beef for now, as he has bigger problems on his hands.