David Baddiel and Frank Skinner performed with the Lightning Seeds in London on Sunday and were introduced by former England player Geoff Hurst (Picture: PA)

Sir Geoff Hurst delighted fans as he made a surprise appearance to introduce David Baddiel and Frank Skinner for a performance of Three Lions at a last-minute Lightning Seeds gig on Sunday afternoon.

Former footballer Geoff, 79, was the only man ever to score a hat-trick in a world cup final, when England won 4-2 against West Germany in 1966, the last time they triumphed in a major tournament.

The sporting legend delighted fans at London’s historic 229 venue where he welcomed the band and funnymen David, 57, and Frank, 64, as they performed their 1996 hit just hours before England were due to play Italy in the Euro 2020 final at Wembley Stadium.

The performance came at the end of a special set by the Lightning Seeds, which was in support of the National Lottery’s Revive Live Tour, aimed at backing the return of live music to grassroots venues after lockdown.

A total of 200 fans waved a sea of St George flags as they saw the band perform with Baddiel and Skinner for the first time in 25 years, with their track Three Lions storming the charts in May 1996 to mark England’s participation in the UEFA European Championship that year.

The mood was jubilant as the crowd danced along and England chants continued after the song finished, and the audience broke out into a chorus of Neil Diamond smash hit Sweet Caroline.

Audience member Matt Armitage, 26, from London, told the Press Association: ‘It was amazing. At the end there we were absolutely losing it, England flags waving everywhere.’

Camilla Daza, 27, from New York, added: ‘I’m not even British but I felt emotional. After the year that you’ve had it was really nice to see everyone come together behind something really positive.’

Meanwhile, David Smith, 51, from Grimsby, said: ‘It was absolutely amazing and surreal. I said to my wife that it was my Woodstock moment. I started crying, I was so emotional. To see Sir Geoff Hurst introduce the best song ever. 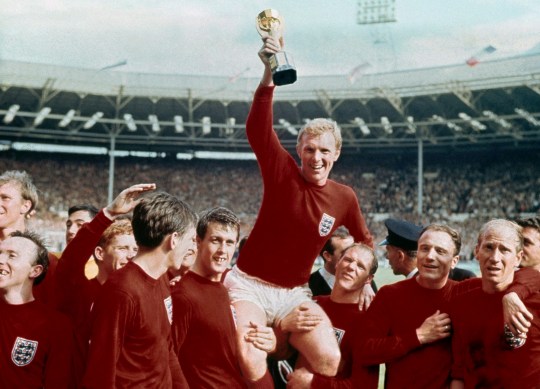 ‘This is our moment, we’ve waited so long for this. This is our time.’

Three Lions was initially released in 1996 for the European Championships, which saw England knocked out in the semi-finals after Gareth Southgate missed a penalty against Germany.

Recently writing in the Evening Standard, Baddiel explained how he and Skinner had wanted to pen a song about the passion of fans and England’s tendency to lose important games.

He wrote: ‘Three Lions is a song about loss: about the fact that England mainly lose. We as fans — as English people — invest an enormous amount in the idea of England, and then, as experience suggests, England let you down.

‘We know this and yet we still — as the 98 version put it — believe. Football fandom is this, it’s magical thinking, it’s hope over experience.’