Sinead O’Connor is retiring from music and public life to focus on writing.

The 54-year-old had announced earlier this month that she was retiring from the music industry ‘having truly given my all’, but later retracted her statement, saying that it was a ‘knee jerk reaction’ to a number of insensitive interviews.

However, the Nothing Compares 2U singer has now confirmed that she is not only quitting music, but is also leaving social media.

Sinead tweeted: ‘On Sunday I begin my new life as a writer, having been in two minds about retiring from the music business. Below is my retirement announcement. My last album, No Veteran Dies Alone will be released in April 2022. There will be no promo. Thanks for all the fun and love.’

In the attached statement, the singer wrote: ‘This is to announce that having been in two minds about retiring I have now, in consultation with my medical team, and on their advice, decided to go ahead and retire so that I may now focus on my new career as a writer.

‘I am happy to have left on a good note, that is, standing up against the intellectually Lilliputian far right, white power movement in this country, without consideration for how absolutely any white people at all, might be upset with my doing so.

‘It would have been morally and spiritually criminal of me to stay silent. No matter how anyone might wish I had. I literally owe my life to foreign residents in this country. And to black and brown people in Ireland and all over the world: historically and in the present: sitting down and staying silent would have made me complicit: just as it makes anyone else who stays silent, complicit. All it takes for evil to triumph is that good people do nothing: it’s not in my nature to do nothing.’

On Sunday I begin my new life as a writer, having been in two minds about retiring from the music business. Below is my retirement announcement. My last album, No Veteran Dies Alone will be released in April 2022. There will be no promo.
Thanks for all the fun and love â¤ï¸ pic.twitter.com/PKrOR3xs3B

Sinead then mentioned her ex-husband John Waters, who she has been critical of on social media this week following comments he made in a conversation with former journalist Gemma O’Doherty on her website.

In the video, Waters suggested the Irish Tánaiste Leo Varadkar – whose father was born in Mumbai and who was born in Dublin – was not Irish but Indian and should be ‘working on buses’.

Sinead called O’Doherty and Waters’ ‘online activities are hurtful and demeaning and damaging to the people of Ireland. And to foreign residents and visitors. And what is good for the goose is certainly good for the gander.’

She continued: ‘Racism triggers and deserves angry responses. And I am unapologetic. No matter who is hurt: these online racists don’t care whom they hurt. So why should I? As I said, I owe my life and soul to black and brown and Muslim immigrants to this country: and to black musicians and activists all over the world, throughout history and in the present.

‘I will be closing my Twitter page in the next few days so that I can begin to enjoy being a private citizen and enjoy my new life as a writer.’ 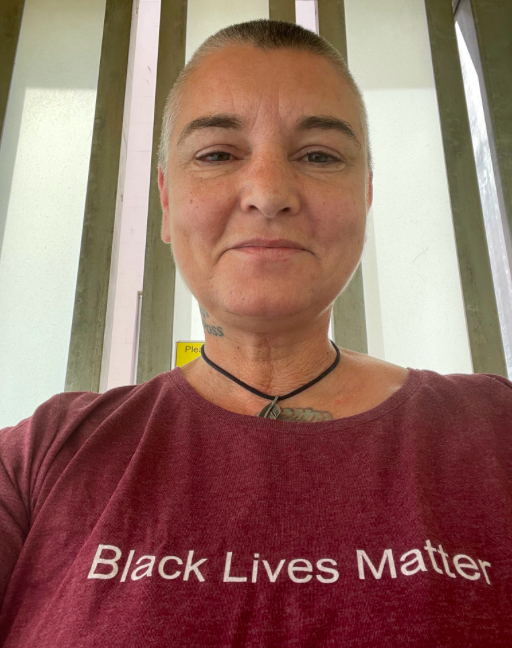 After thanking her fans and co-workers for their support, the Mandinka singer said: ‘We’ve all had a great adventure: now it’s time for the next one.’

This weekend, Sinead will write her first column for the Irish newspaper The Sunday Independent, and told a follower she would also be writing for other publications in a freelance capacity.

This career changes comes shortly after Sinead – who adopted the name Shuhada Sadaqat in 2019 – published her memoir, Rememberings.

The Grammy nominated star released her debut album The Lion and the Cobra in 1987, and went on to release a further nine albums, with her last, I’m Not Bossy, I’m The Boss, released in 2014.

Her final album, No Veterans Die Alone, will be released next year.