Sam is up to something – but what? (Picture: BBC)

It’s no surprise that Sam Ryan (Amanda Burton) is harbouring a lot of secrets following her return to Silent Witness last night. Her life has changed a lot since we previously saw her in 2004 – but could she firmly be on the dark side and out to sabotage the Lyell Centre for the benefit of her dodgy health passporting service?

It’s a question many are left asking after tonight’s cliff-hanger, which saw Sam steal a sample of blood that Nikki (Emilia Fox) thinks is being used to fabricate evidence.

Nikki has developed this theory because she believes her ex-husband (yes, quite the twist), Tom (Matthew Gravelle), has had his DNA faked in order to be framed for the death of Daniel Clements and the Health Secretary’s assassination.

So, it certainly looked as though Tom was in the clear, but as he pointed out – DNA doesn’t lie, unless Nikki can prove he’s had his DNA fabricated, the police and well, nearly everyone else will believe he was responsible for the shootings and Dan’s murder.

Saying all of that, it’s important to add that what we’ve learnt about Tom so far doesn’t completely make him an innocent man. When Nikki and Tom were theorising over DNA being faked, a feud involving Sam and Jomo over UNITAS came up. 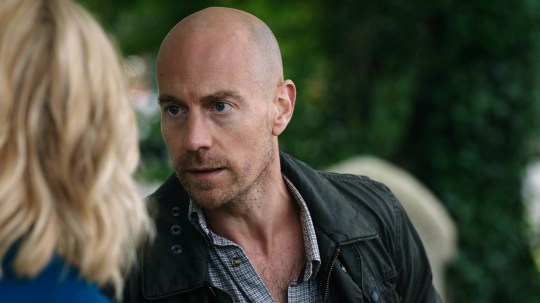 Tom is aware of Jomo’s shady funding for the service, and certainly doesn’t agree with health passporting, but is this enough for Sam to try and have him framed?

‘There will be some purists out there who will be screaming on Twitter at how Sam is during this series! Yes, she’s always had that moral compass but also, just like Nikki, Sam has tunnel vision and always wants to get the answers to something, and I think that was something we were really aware of when writing Sam. I think Sam has a different agenda to Nikki and I think that we may not understand what that agenda is just yet.

‘But what we do know about Sam is when she has an agenda, and she has an idea and she wants to pursue it, nothing is going to stand in her way. When we were at the screening, we were watching episode 1 and I did pat myself on the back, because throughout the episode, there are quite a few clues about Sam – the comments and moments you see at the start really do pay off towards the end.’

Preparing this series was a lot of work for Nick and the team. The arc about DNA fabrication is complicated and interesting, they had to ensure Nikki and Jack’s (David Caves) relationship remained exciting, not to mention exploring Simone’s (Genesis Lynea) past (we’ll get to that, don’t worry).

As if that wasn’t enough, they of course had to try and work out the sort of person Sam Ryan would be over a decade on from when we last saw her. 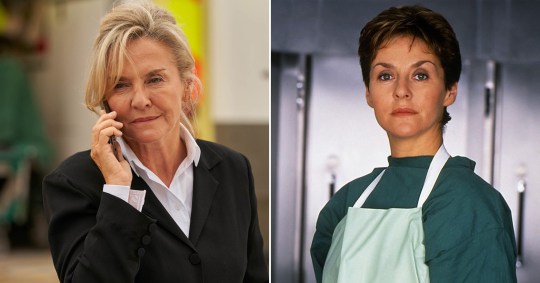 ‘We had to do something really difficult with Sam’s return’, Nick told us.

‘We had to bring back this character who had to be Sam, right, she had to recognisably be Sam Ryan – Amanda doesn’t want to play a different character. But what she does want to play is an acknowledgement that she hasn’t been in the show for 17/18 years. If I said to you “you’re going to play a version of yourself 17 years in the future, you wouldn’t expect to be the same.

‘When Amanda got the call from her agent asking if she wanted to come back, she feared Sam would just turn into some old lady that loved gardening! There was another version, which was the team finding a dead body, linked to a case from 25 years ago. They go and find Sam, who’s retired somewhere in Ireland and they say, “do you remember anything about this case?” and she says yes, they’re all best mates and she helps them save the day. Dramatically, I don’t think that’s very interesting because there isn’t an understanding as to where she’s been and what she’s been doing all this time.’

So, let’s talk about Simone. 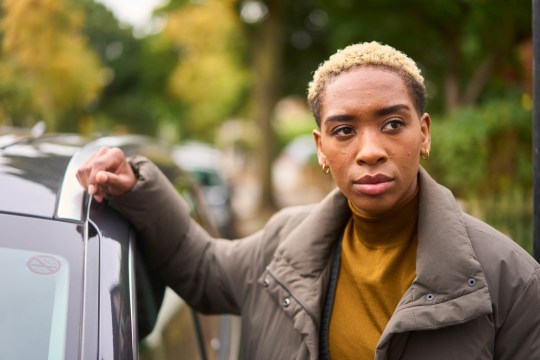 Simone is thrown when she meets DI Johnny Campbell – but who is he? (Picture: BBC)

As she only joined the show last series, we don’t know a great deal about her – but that all changes in part 3 of this story, airing next Monday.

When a woman confesses to murdering her husband, the Lyell team are called to deal with the death and must determine if all is as it seems.

The Detective in charge of the case is Johnny Campbell (Duncan Preston), someone Simone recognises.

Initially, Simone can’t work out why she knows DI Campbell, but when he says one particular line, the penny drops, and she is thrown back to her childhood.

As we continued our chat with Nick, we wanted to know more about Simone’s past and he revealed, despite part 3 being a bit more of a standalone episode – Simone’s story doesn’t end when the credits roll.

‘Simone’s story is a big feature of episode 3, and I would suggest that it’s not concluded straight away. We talked about her backstory and where she came from right at the start, back in series 24. The story, the way it’s developed, it’s been in the pipeline for a while. We deliberately set the character up in such a way that the audience didn’t really know much about her.

‘I think it’s really difficult when you’re introducing new characters, we had to find that balance between wanting to get on with other stories, other characters like Nikki and Jack and exploring Simone’s past as well.’

‘And with Simone, there’s a comedic side to her, so it was important for us to make sure she didn’t just become a comedy sidekick, or she didn’t get put into one box.

‘Genesis is an incredible actress, so I think you really want to push her and give her more, give her character more depth and really strengthen the relationships with Nikki, Jack and her family, which we do in episode 3.’

Silent Witness continues next Monday, 9pm on BBC One.

Read part 3 of our interview with Nick straight after episode 3 on Monday.