LUKE SHAW says he and his England team-mates will be there for ‘devastated’ Bukayo Saka, Marcus Rashford and Jadon Sancho.

And when the pain has eased, the Manchester United defender, 26, is looking forward to the Three Lions’ young squad embarking on a ‘new adventure’ towards next year’s World Cup.

Luke Shaw has revealed the England squad will support Saka, Rashford and Sancho after their missed penalties in the Euro 2020 final shootoutCredit: Getty

Shaw, who has become close to Arsenal teenager Saka during the five weeks in camp, said: “He’s devastated.

“But I think the most important thing is for us now as a team to be there for him and give him a big hug and tell him to keep his head up.

“It happens. It is a penalty shoot-out – anything can happen, as a lot of people know.

“It is an experience he will learn from but we will all be behind him, he knows that.

“It is not just him, though. There’s Rashy and Sanch also. We’re with them all. With this team there are no individuals who cost us.”

For Shaw, it was the second time in a matter of weeks that he had suffered the agony of defeat in a final on penalties.

United lost a dramatic, long shootout against Villarreal in the Europa League and Shaw said: “It is devastating. Gutting.

“It is of course not what we wanted. I think we felt very confident about the final. 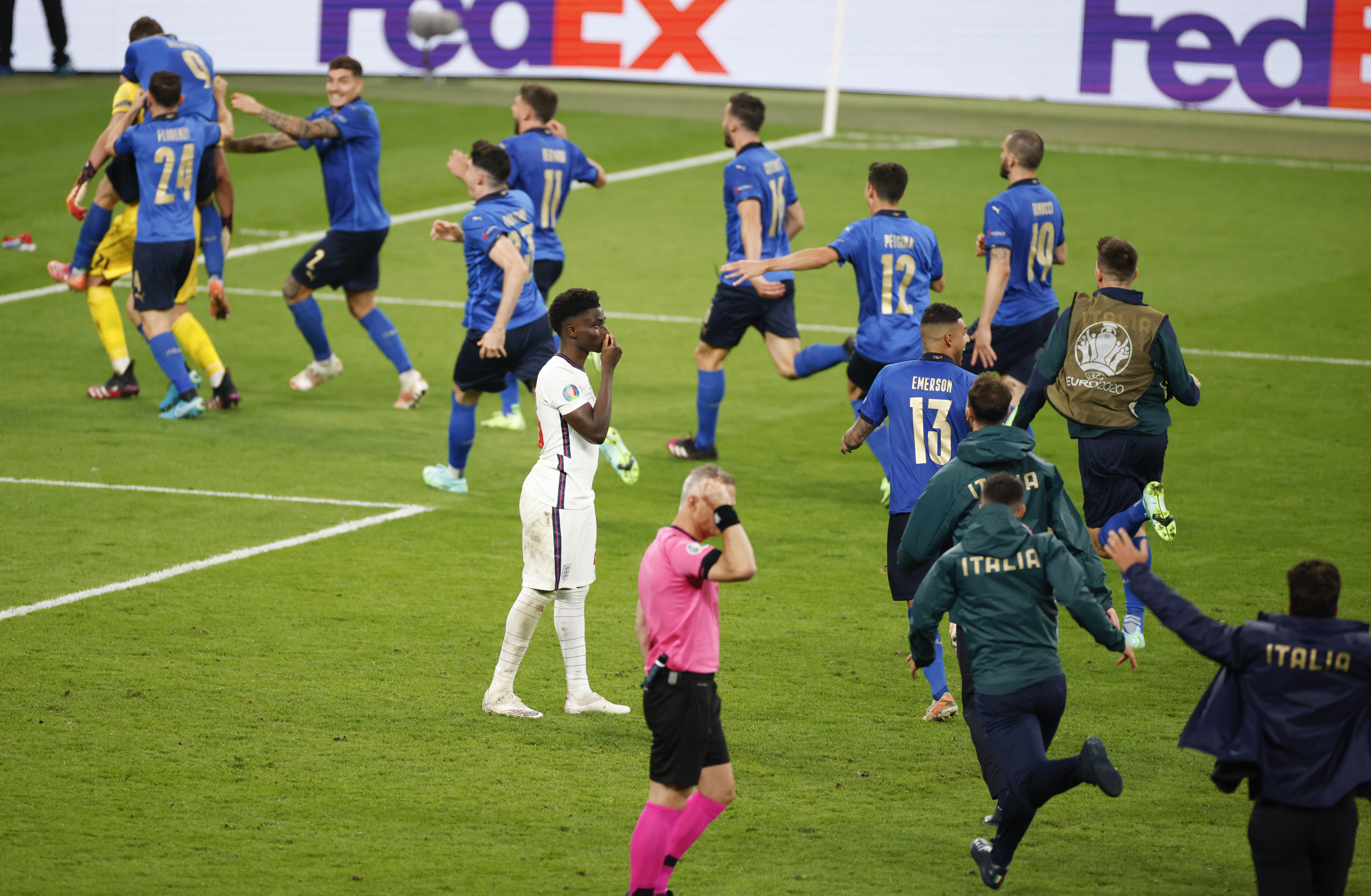 Saka was left crestfallen after his fifth and decisive penalty was saved by DonnarummaCredit: AP

“We felt like we were going in the right direction with our performances. We are devastated. We gave everything and just came up short.

“But it was a step in the right direction in terms of what we wanted to achieve – a [European] final, that’s the first time in history that has happened.

“But it is not just me, it’s the team. That is not enough. We wanted to win but as I say we came up short.

“We are all really gutted tonight and it hurts a lot.”

Manager Gareth Southgate gathered the England players in a huddle before they were presented with their runners-up medals and tried to help them look forward with confidence.

Shaw said: “He just said to keep our heads up. He also said what a fantastic group everyone is a part of and of course things are going in the right direction.

“The squad in general, the togetherness, is definitely there. You could seen that even after the game and that huddle and the way we were with the lads who missed.”

Shaw and the England players will not have long to lick their wounds, with the new Premier League season due to begin on August 11.

And on September 2 they will be in Hungary for a qualifier for the World Cup in Qatar that will start in November 2022 – barely 16 months away. 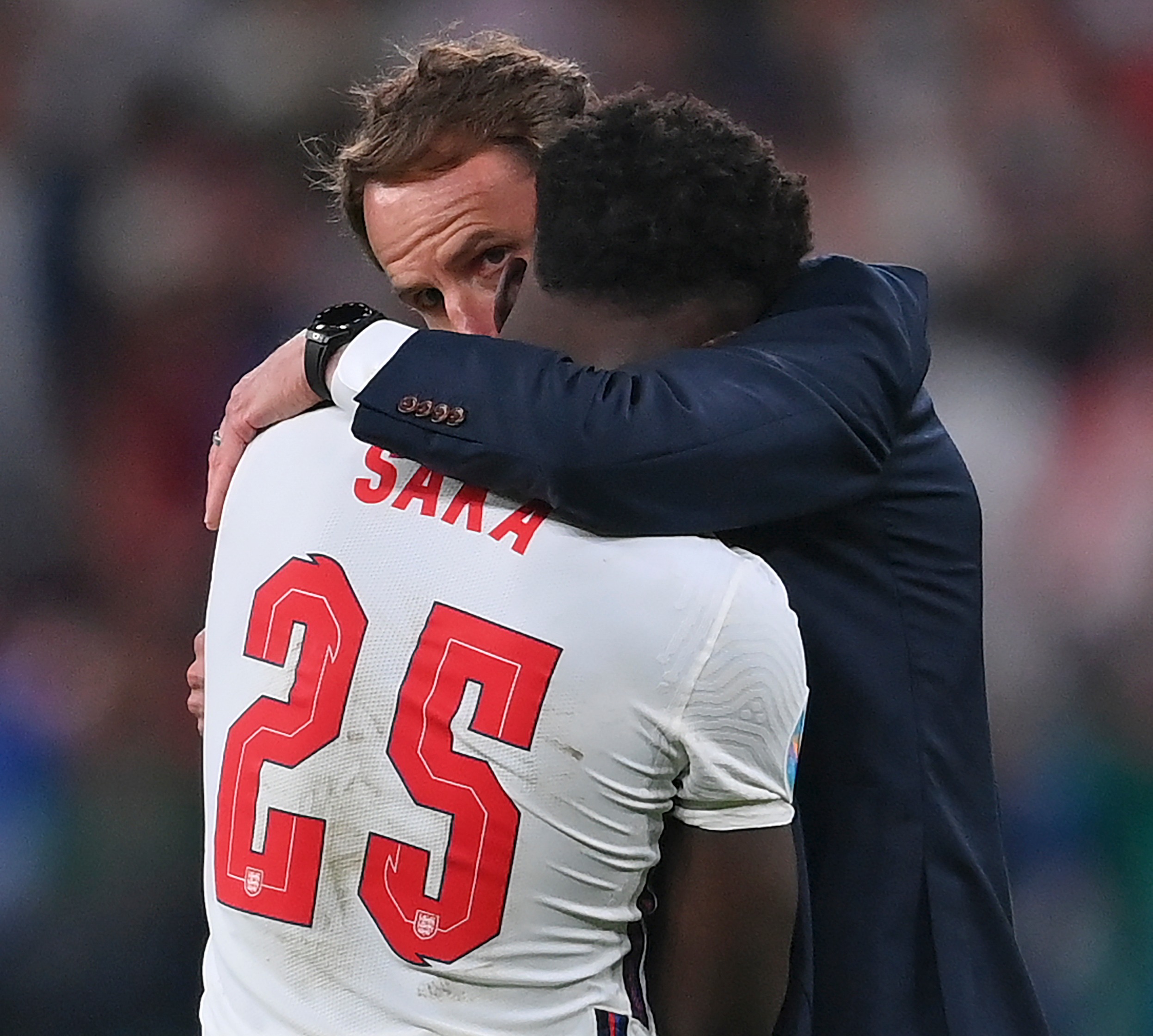 Saka was consoled by Southgate after his penalty was saved in the shootoutCredit: AP

Shaw said: “First and foremost I obviously hope we made the nation proud – that is always important to us.

“But I hope this tournament brought smiles and joy to people even if it ended on a low.

“I think overall, the experience we have all had as a team with the fans being here will be memories we won’t forget.

“But we know as a team we can always keep improving.

“The good thing about the team is there are a lot of good young players in the squad that are only going to mature and grow up and gain experience from matches like tonight.

“It is going to hurt for a while but I think we are back in camp towards the end of the next month and a new adventure in the World Cup and we want to qualify for that.

“We know there are things to improve on as a team but I am sure we will get there.”