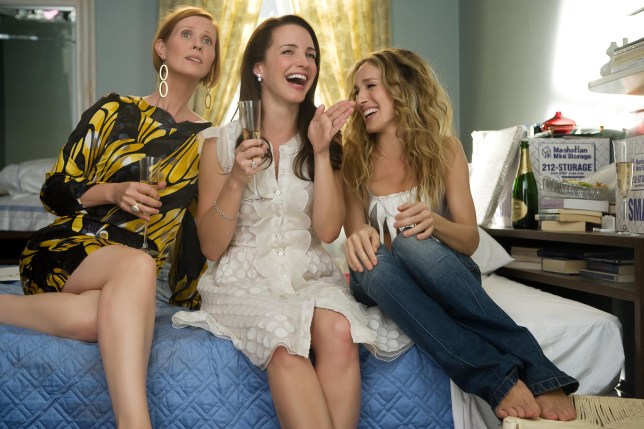 A stand in for Charlotte (played by Kristin Davis, centre) has revealed shocking behind the scenes behaviour on set (Picture: REX)

A Sex And The City stand-in has recalled shocking behaviour from the set of the original series, claiming she had her feet tied to a bed while she was asleep.

Heather Kristin, who played Kristin Davis’ double on the HBO series for four seasons, shared details of her experiences on the show, which is returning for a reboot with Sarah Jessica Parker, Cynthia Nixon and Davis.

She remembered how she once fell asleep on the gynaecologist’s table with her legs spread into the stirrups while re-enacting a season four episode.

‘When I awoke, I found my feet had been duct-taped to the stirrups,’ Kristin alleged. ‘Crew members laughed. I felt sick.

‘They took Polaroids of me like it was a big joke. I wanted to flee. But I needed the paycheck. I needed the Screen Actors’ Guild healthcare.’

Kristin also shared details of how one male cast member had asked for one of her colleagues to be ‘tied up, gagged and brought to my trailer.’

‘I was disgusted,’ she wrote in the Independent. ‘I don’t think he even had a trailer. The next time that male actor got too close to me, I said, “This is my space. It’s my job to stand here. Back up.”’

Kristen added that her experiences on the set of Sex And The City taught her ‘how messy the industry could be’.

Sex And The City’s new series And Just Like That was announced in January.

While it’s been confirmed that Kim Cattrall will be a no-show as Samantha Jones, HBO Max has offered a clue as to how the character’s absence will be explained.