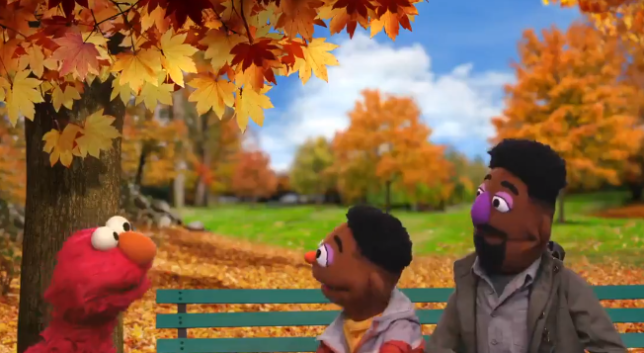 Sesame Street have added two Black Muppets to the cast as they continue to educate children about race and racism.

Father Elijah and his five-year-old son Wes have been added to the US children’s program as part of a new series called ABCs of Racial Literacy.

The series has been launched by Sesame Workshop, the non-profit organization behind Sesame Street, as part of its ‘commitment to racial justice’.

In the first video titled Explaining Race, Elijah and Wes take a break from their nature walk to talk with Elmo about skin tome.

Elmo compares his fur and Wes’s skin to the surrounding red and brown leaves.

‘Good observation, Elmo,’ Elijah replies before he explained: ‘Melanin is something we each have inside our bodies that makes the outside of our bodies the skin color that it is. It also gives us our eye and hair color’.

He then reminds viewers that ‘the color of our skin is an important part of who we are, but we should all know that it’s OK we all look different in so very many ways.’

The new series comes after Sesame Street spoke out against racism amid the protests started by the death of George Floyd.

A statement was shared on social media reiterating Sesame Street’s roots in diversity and inclusion, while also calling for the world to promote kindness.

The post read: ‘Racism has no place on our Street – or on any street. Sesame Street was built on diversity, inclusion and, especially, kindness.’

The statement continued: ‘Today and every day we stand together with our Black colleagues, partners, collaborators and the entire Black community.

‘We stand with our friends around the globe to speak out against racism, to promote understanding, and to create a world that is smarter, stronger, and kinder.’