So Jason was actually on a call (Picture: Getty)

Selling Sunset fans were in stitches while bingeing season 5 after they caught Jason Oppenheim on the phone to… no one.

Well, actually, the big boss of the Oppenheim Group has come forward to prove that he was actually on the phone and wasn’t ‘faking’ a call.

The moment came when Jason is supposed to be on a call with a client, but eagle-eyed fans clocked his phone screen was open on the camera app.

Taking to Twitter to expose the scene, a viewer wrote: ‘My vibe today is Jason talking to his camera pretending to call a client.’

Well, Jason was aware of the speculation on social media and told TMZ: ‘It was not a fake phone call.’

Needing further evidence, the reporter asked Jason to make a call and open the camera app.

Lo and behold, it worked. So all the doubters might owe Jason an apology…

However, Jason’s very real phone call is just one of the big shockers to come from the Selling Sunset team today after Christine Quinn is thought to have quit The Oppenheim Group following the events of season five.

The latest series closed with Emma Hernan accusing Christine of trying to bribe one of her clients, which was brought to Mary and Jason’s attention. 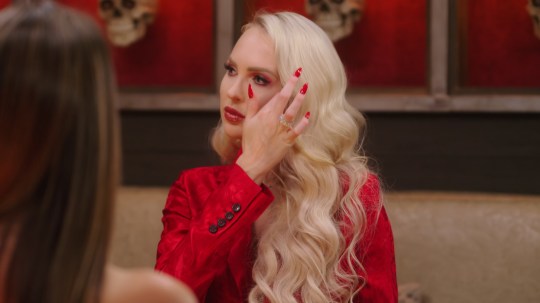 Christine appears to have left the Oppenheim Group (Picture: Netflix)

When they attempted to speak to her, however, she failed to show up.

And now Christine’s bio has been cut from the brokerage’s website, but her image is still present on the top of the ‘our team’ tab.

The latest comes after Christine dropped out of the upcoming Selling Sunset season five reunion, after catching Covid.

Other cast members have accused her of lying about getting the virus though, after she was spotted on a film set that same day.

Selling Sunset is available to stream on Netflix.