Saturday Night Takeaway hosts Ant McPartlin and Declan Donnelly had the last laugh as Oti Mabuse was put in the hot seat in I’m A Celebrity…Get Out Of Me Ear!

The wild and wacky annual show is notorious for featuring a fair share of elaborate pranks featuring some of the biggest stars in the world.

And Saturday’s final episode of the year saw the former Strictly Come Dancing professional interviewing four candidates – who were all under the impression that they were there for a chauffeur interview.

However, Oti was caught off guard when Ant and Dec told the star (through her ear-piece) to ask driver Mark to fold her underwear mid-conversation.

Yep, you read that correctly.

‘I’m so sorry that’s my washing, I was meant to fold that,’ Oti said to him. 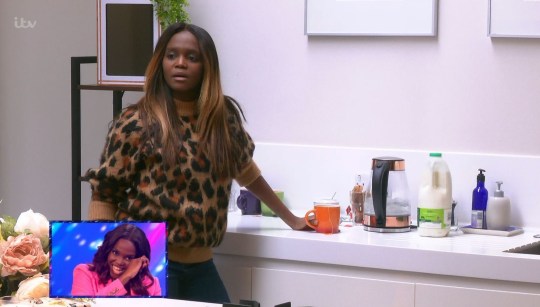 Oti couldn’t keep it together when she watched the skit back (Picture: ITV)

‘If you could fold that, that would be brilliant. Honestly, I don’t mind you touching my smalls,’ she asked.

A slightly stunned Mark politely obliged, which resulted in the Geordie duo bursting into fits of laughter.

‘Perfect just do a couple more, you’re really helping me out,’ she added.

Viewers quickly took to Twitter to address the uncomfortable yet hilarious moment.

The man on The get out of my ear with Oti is adorable. He was folding her knickers for her and dancing the samba in slippers! ðð #SaturdayNightTakeaway

ð¤¦ââï¸The whale slippers she’s got him wearing while folding her Smalls, Lmao ðð¤£ð³ð#SaturdayNightTakeaway

Already love this guy on #SaturdayNightTakeaway, god bless him helping Oti fold her pants while he wears his Narwahl slippers ð­ð¥ºð

‘Already love this guy on #SaturdayNightTakeaway, god bless him helping Oti fold her pants while he wears his Narwahl slippers,’ one person tweeted.

‘The man on The get out of my ear with Oti is adorable. He was folding her knickers for her and dancing the samba in slippers!#SaturdayNightTakeaway,’ another added.

‘@antanddec I would quite happily apply for a job to fold @OtiMabuse underwear! Where do I sign up? #SaturdayNightTakeaway,’ one person joked.

Elsewhere in the final instalment of the 90-minute show, Dec triumphed in the last Ant versus Dec segment of 2022, and the hosts handed out Takeaway Getaways to members in the studio audience as well as viewers at home.

Comedian Lee Mack was the guest announcer while regulars Stephen Mulhern, Fleur East, and Andi Peters also made an appearance.

Saturday Night Takeaway is available to watch on ITV Hub.