Sam Fender has discussed how getting the approval of Scottish comedian Limmy was “probably one of the best fucking moments of his life”, as well as discussing working with the likes of Sigrid and Sting, and sharing advice for young songwriters.

The North Shields singer-songwriter was in London yesterday (Thursday May 19), where he was awarded at the Ivor Novellos for Best Song Musically and Lyrically for his acclaimed second album ‘Seventeen Going Under’.

As well as being named as NME’s Best Album of 2021 and winning both Best Album By A UK Artist and Best Album In The World at the BandLab NME Awards 2022, Fender has also recently won BRIT Awards among other accolades.

Speaking to NME in the winners’ room about where he was putting all of these awards, he replied: “They’re in the pub! I got them turned into beer pumps! I think this one might come home. I might give this to my dad; I think he’d be really chuffed.”

And what has he done with his NME Award?

“I might turn that into a beer pump, or leave it in the pub for loads of dafties to do drugs off it,” he said.

During his acceptance speech at the Ivors yesterday, Fender used the opportunity to pay tribute to his former manager at said pub, North Shields’ Low Lights Tavern.

“A very good friend of mine passed away last week,” Fender told the audience. “He was my very first boss and employer. He gave me a job when both me and my mum were unemployed. He used to always hit me over the head with a newspaper for being a shit barman.

“I was always playing guitar in front of people instead of serving the customers, until one day he said, ‘Go get your guitar out and sit in that corner’. That was because my future manager, who was up and coming at the time, had just come in the pub. Without that man then none of this would have happened, so thank you so much.” 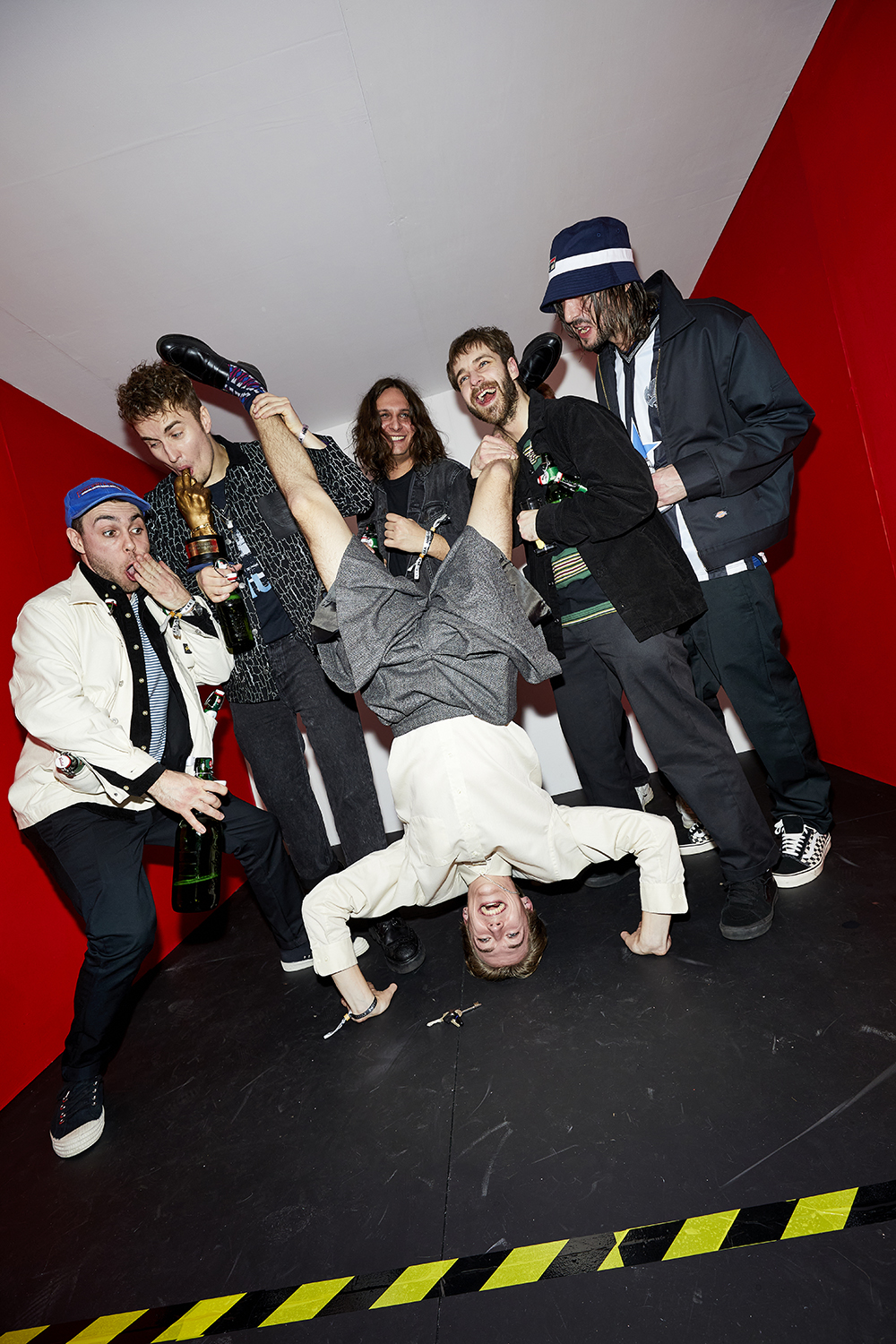 Sam Fender with his band and Francis Bourgeois at the BandLab NME Awards 2022 Credit: Zoe McConnell

When NME asked Fender about his speech and what advice he’d give to singer-songwriters from similar backgrounds, he replied: “Write, but write furiously. I always think that regardless of what happens or where you’re from – and if it wasn’t for [my old bar manager] I don’t know if I’d be anywhere – but what I do know is that if a song is really fucking good then people will hear it. If your song is brilliant and people can relate to it, then that’s normally what cuts through.

“It was the song that made him believe in us, then he’d take that song and it made everyone believe in that and then it was music that was the driving force behind it. Just write relentlessly. Never stop.”

Pointing to his current manager stood nearby, Fender continued: “He spurred me on and I’d write even more. As a kid I’d go down to busker’s night and I just wanted to play them in front of people and release them, but he told me to just keep writing. Then about 200 songs later I had one half good one. That’s how it works.

“You’ve gotta find someone who loves your stuff but also loves you as a person.”

The last time Fender spoke to NME at an Awards ceremony was at the BandLab NME Awards 2022, where he used his winners’ room interview interview to deliver a rendition of the Star Wars theme as interpreted by Scottish comedian Limmy. After footage spread online, Limmy then shared it himself on Twitch and Twitter.

“When I was living at my mam’s and skint as fuck, I was sat in my bedroom smoking skunk, I didn’t have a job, there was black mould on the wall and I was like, ‘This sucks’. I used to watch his Dee Dee sketches. That was about a stoner bloke who was living in a flat that was dire, manky and had fuck all.”

Fender added: “Finding the humour in that darkness was so empowering. It just used to make me fucking laugh, and you’ve got to find the humour when the chips are down. That’s the beauty of it. I think the Scottish and the Geordies are really fucking good at that. That’s one of our fucking talents.”

Could a collaboration between Fender and Limmy be on the cards?

“Ah fuck, he wouldn’t go near us!” Fender replied. “I wish he would though!”

Speaking of collabs, Fender also revealed in the winners’ room how he had been working with Sigrid.

He said: “We’ve done a little bit of writing and stuff, but nothing’s set in stone. I’ve been doing some co-writing on the side along with my own stuff. I’m too much of a control freak to co-write, but I’ve kind of opened up into that world.”/

Fender continued: “We’re just on the crest of a wave at the moment. It’s kind of impossible to get time just to record my own next lot of stuff – never mind penning someone else’s smash hit.”

He did reveal that something was in the works with his fellow Geordie troubadour, Sting.

“Sting occasionally Facetimes us,” Fender revealed. “Normally, weirdly, I end up being the bath at the same time. I was supposed to do a gig with him, but that got rearranged. I told him I’d love to sing ‘If I Ever Lose My Faith In You’ with him, because it’s the hardest fucking song on the planet and I’d completely fuck it up. There’s another called ‘All This Time’, which is a song about our hometown.”

Regarding working with Sting, he continued: “We did a track with him and Mark Knopfler. It just some guitar stuff, but that was the most fucking nerve-wracking thing – doing a guitar take on a Mark Knopfler soundtrack. Springsteen’s on it as well, and a million other people. All of the legends and then just me – a stupid Geordie!”

The July 15 date recently sold out, which Fender dubbed as “absolutely fucking ridiculous”.