We have come to expect an extra level of gag-worthiness from the All Stars edition of RuPaul’s Drag Race, and the latest episode of All Stars 6 did not disappoint.

Warning – spoilers ahead for All Stars 6 episode three.

Laganja Estranja returned to the competition as a lip sync assassin in the most spectacular way possible – leaping from a great height into shot and landing in the splits.

Think Aja’s ‘is she gonna jump from there?’ moment in All Stars 3, triple it, and you get the idea.

This week’s top queen Trinity K Bonet, who won after an acting challenge, waited to see who she’d be facing in the lip sync for your legacy, but was confused when the backdrop was raised to reveal nobody was there.

After a few moments of confusion, a voice could be heard saying: ‘Oh, y’all !’ – before Laganja jumped from a height and landed in a perfect split, shouting: ‘Come on All Stars 6, let’s get sickening!’

RuPaul was agog at the stunt, with a shellshocked Trinity saying: ‘That first stunt don’t count.’

When asked how she was doing, Laganja joked: ‘I’m medicated so I’m doing lovely, girl. How else do you think I did that stunt?’

Viewers were living for Laganja’s entrance and begged for the season six queen to return for the next season of All Stars.

Her performance to Dua Lipa’s Physical was just as jaw-dropping as she packed her routine with as many death drops as her limbs could handle.

In the end, her athletics were too much for Trinity to keep up with, and Laganja was named the winner, with the $10,000 cash tip rolling over to next week.

This also meant that the lipstick Laganja was holding would equal the queen who was being set home – with Silky Nutmeg Ganache becoming the third queen to sashay away, after receiving the most votes from her fellow queens out of her, Akeria C Davenport, Jan and Ginger Minj. 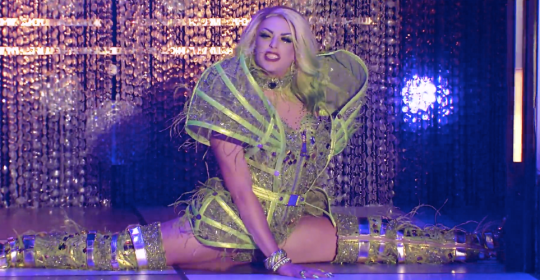 Laganja pulled out all of the tricks (Picture: Netflix)

Laganja’s appearance on All Stars airs just weeks after she publicly came out as a transgender woman.

The 32-year-old had been out for a year amongst her inner circle, and said it was ‘incredibly empowering’ being able to live her truth.

She told Entertainment Weekly: ‘People think that when you’re trans that you’ve wanted to be a girl your whole life; yes, that’s partly true [for me], but it’s also true that I’ve wanted to be male my whole life to fit into what society deems as normal.

‘But, that isn’t my truth, and I’m daring to take this on. I tried to be male and be in-between and nonbinary. The truth is I’m a feminine entity and I can live this life.’

Laganja isn’t planning to change her drag name or her birth name, and will still go by Jay out of drag.

RuPaul’s Drag Race All Stars 6 is available to stream on Netflix, with new episodes dropping on Thursday.