Alan Rickman captured the people’s hearts as a villain for the ages (Picture: Rex)

Three decades ago today, the world was introduced to Robin Hood: Prince of Thieves and a film take that would go down in fandom history, less so for its folklore hero and much more for its leather clad villain – step forward Alan Rickman as the Sheriff of Nottingham.

The late actor has always been popular with audiences, and certainly displayed a knack for delivering memorable baddies in films, from Hans Gruber in Die Hard to Harry Potter nemesis Professor Severus Snape.

Robin Hood: Prince of Thieves had a pretty star-studded cast with Costner and Rickman joined by Morgan Freeman, Christian Slater and Mary Elizabeth Mastrantonio – plus who can forget the Bryan Adams theme song, Everything I Do (I Do It for You), that dominated the charts for the summer of 1991 (moving on from claiming ’69)?

But his eye-rolling, hissy-fit-having Sheriff, with pantomime levels of outrage, is the real treat fans return to again and again, serving as the heart of the film’s sense of fun.

So as enthusiasts marked the 30th anniversary of the fim’s release, it wasn’t so much Costner’s oddly American Robin that they returned to reminisce over but Rickman’s spoon-wielding Sheriff.

Fans were quick to reference his most famous line to ‘call of Christmas’ in tweets with appropriate GIFs, while others got straight to heart of the matter over the actors’ unexpected death at the age of 69 in 2016, with one user writing bluntly: ‘Don’t think I don’t see that everything in the world started going bad right after Alan Rickman died.’

There are many reasons to love Prince of Thieves, but the sheer majesty of Alan Rickman has got to be at the top of the list. pic.twitter.com/vNP05L6qkm

Don’t think I don’t see that everything in the world started going bad right after Alan Rickman died.

Robin Hood: Prince of Thieves turns 30 today, and I still love everything about it. The mix of action and humor. The casting–especially of the late Alan Rickman. Also, it was co-written and co-produced by my two USC professors and friends @Pendensham & John Watson. #FilmTwitter

Another shared a photo of a specially-made T-shirt they had, celebrating Rickman’s miserly attitude as the Sheriff and his brilliant lines.

30 years ago today Robin Hood: Prince of Thieves was released and gave us one of Alan Rickman’s most memorable villains, storming about saying things like “I’ll cut his heart out with a spoon”. Today’s shirt is one I had made a few years ago in tribute “AND CALL OFF CHRISTMAS!” pic.twitter.com/tXrZIc8HgB

Some weren’t necessarily of the opinion that Robin Hood: Prince of Thieves as a film was particularly great, but all were united in the brilliance of Rickman, with one criticising the ‘dodge’ accents (fair) but heaping praise on the star’s ‘unhinged, campy goth Sheriff of Nottingham’.

I have a soft spot for the extreme nonsense of Robin Hood: Prince of Thieves, a film I watched too many times as a kid before I could tell the accents were dodge. Will always love Alan Rickman’s unhinged, campy goth Sheriff of Nottingham. pic.twitter.com/4Ghnn155PE

Itâs been 30 years since Robin Hood: Prince of Thieves was released. Itâs not strictly speaking a good movie, but the late Alan Rickman is wonderful in it, a gloriously over the top performance that puts Kevin Costnerâs dour hero to shame. Why did he have to be taken so soon? pic.twitter.com/79xHXAAUU0 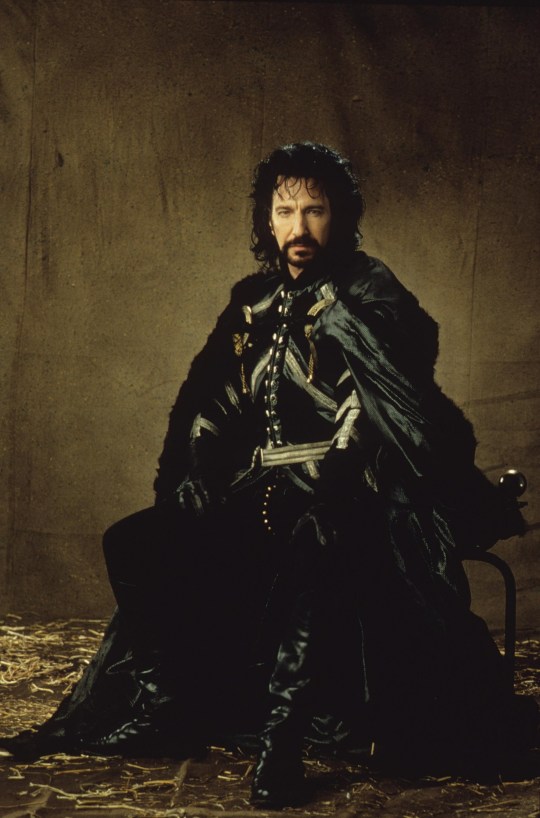 Alan in full splendour as the Sheriff of Nottingham (Picture: Morgan Creek/Warner Bros/Kobal/Shutterstock)

Although we will sadly see no more villainous masterclasses from Rickman, it’s safe to say his legacy from Robin Hood lives on, offering fans the comfort of cutting our hearts out with a dull spoon or cancelling Christmas.