Rob Rinder has lambasted those in the audience at Jimmy Carr’s Netflix special who ‘clapped’ and ‘cheered’ over the joke he made about Roma and Sinti people who were killed by the Nazis, describing the segment as ‘breathtakingly racist’.

This week, a clip from Carr’s programme His Dark Material, which was released on Christmas Day last year, sparked fury as it circulated widely on social media.

Carr has received widespread criticism over the remarks, sparking petitions calling him to apologise and for Netflix to remove the joke, with MPs also joining the calls.

Rinder, who is the grandson of a Holocaust survivor, shared a statement on Twitter condemning both Carr’s comments and the reaction from the people watching the show.

‘Jimmy Carr’s “joke” suggesting the systematic genocide of gypsies during the Holocaust was a “good thing” is breathtakingly racist. The truly disturbing thing isn’t just the gag, it’s that on hearing it, instead of leaving, the audience clapped, whooped and cheered in approval,’ the TV judge said.

People have called on Carr to apologise (Picture: Twitter/@RobbieRinder)

In a second tweet, the 43-year-old said that ‘middle class comedians can do irony and clever boundary pushing so it’s “ok”’.

He continued: ‘Let’s imagine the reaction to this joke had it been filmed at a working men’s club to a cheering whooping audience.’

After the clip from Carr’s Netflix special went viral, The Traveller Movement, a national charity that challenges discrimation against Irish Travellers, English Romany Gypsies and Roma, tweeted in response to the clip: ‘This is truly disturbing and goes way beyond humor. We need all your support in calling this out.’

The organisation later announced that they had launched a petition to Netflix ‘calling for the removal of the segments of His Dark Material which celebrates the Romani genocide’. 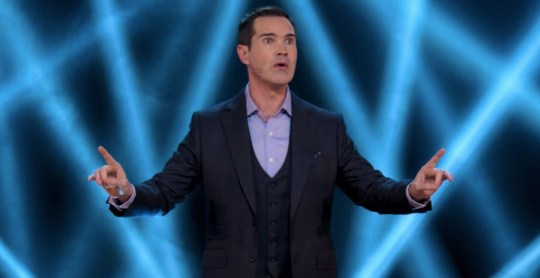 The charity Friends, Families, Travellers said it is ‘disgusted and outraged” by the Carr’s comments (Picture: Netflix)

During an appearance on BBC Breakfast, Culture Secretary Nadine Dorries suggested that the Government would legislate to stop comedy people find offensive being shown on Netflix.

‘We are looking at legislation via the Media Bill which would bring into scope those comments from other video on-demand streaming outlets like Netflix. So it’s interesting that we’re already looking at future legislation to bring into scope those sort of comments,’ she said, adding that the comments made by Carr were ‘abhorrent and they just shouldn’t be on television’.