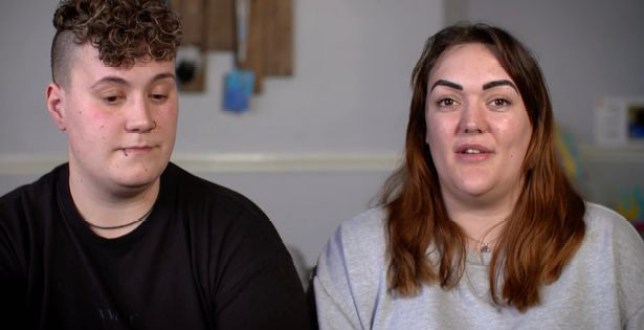 A millionaire on Rich House, Poor House has offered a couple living in poverty a lifeline, helping them with a ‘stepping stone’ to paying off their £11,000 debt with a business masterclass.

Mel Clay and Sophie Cooper, who are both 28, live with their baby son Teddy and live on just £56 a week after rent and bills.

The pair spoke about their fears surrounding their financial treatment on the Channel 5 show, saying they were worried they wouldn’t ‘ever find a way out’ of their debt.

‘Luckily I’m back in full-time work now and Sophie is looking after Teddy,’ Mel said. ‘But we’re just in a pit and it’s really hard to get out of it.’

Sophie is the one who looks after the finances, and admitted that she hadn’t told Mel just how bad their situation had become.

Speaking about the notices from the bank, she said: ‘I don’t think Mel’s seen any of these. I just don’t tell her. She wouldn’t deal with this very well. Not very well at all.’ 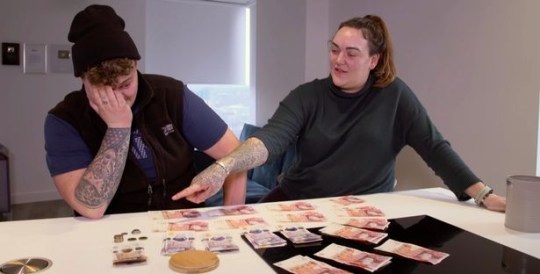 The couple lived on Kamil’s income for a week (Picture: Channel 5)

She added: ‘I don’t feel as though there’s ever a way out of this.’

The episode saw them swap lives with self-made millionaires Kamil Sattar and his partner Francesca Garrott, who enjoy around £1,750 in disposable income a week.

Kamil is worth £3million after making his money in ecommerce, while Francesca runs a successful lingerie company.

Both sets of couples were both shocked after swapping their lives on the show, with Kamil expressing his disbelief after discovering they only had £8 a day per person to survive on.

‘For them to feed a child and both of them on £8 a day, that is literally, in my opinion, crazy,’ he said. ‘On a budget like that you’re eating pot noodle.’

Mel and Sophie on the other hand enjoyed having extra money to treat themselves with, with Sophie sharing her delight after seeing a £50 note for the first time. They also enjoyed a lavish takeaway, as well as a wine shop and date night with the income.

Later in the episode, a meaningful moment came when Kamil attempted to help Sophie with her business – which involves creating graphic prints to sell on Facebook.

After being inspired by experiencing their situation, Kamil offered to create a website for Sophie and give her business advice to help with her future.

Speaking about the venture with Sophie, Kamil said: ‘One of the biggest things that you’re missing here is a solid website to accept payments through, to build your brand.’

He added: ‘I own a web development company, so I can get a website made for you… You’ve just got to make sure that you commit to it. I always say to people that you either win or quit – you can’t lose.’

Following their encounter, Kamil said: ‘To know that Mel and Sophie wanted a website as well, and to know that’s what we were going to offer, it did make me feel really, really good. Like I said, I promised her that training so we’re definitely going to be staying in touch.’

It comes after a millionaire who swapped lives with a single mum living on £53 a week on the show made the kind gesture of offering her a job to help get her life on track on a previous episode.