Former WWE star Renee Young – now Paquette – noticed a big different in her husband Jon Moxley after his own exit from the company and move to All Elite Wrestling (AEW).

The pregnant Oral Sessions podcaster – who has her own cookbook Messy in the Kitchen coming out in May just weeks before she’s due to give birth to their first child – has opened up on her partner’s departure from Vince McMahon’s promotion in 2019, which came after seven years as Dean Ambrose on Raw and SmackDown.

Speaking exclusively to Metro.co.uk, Renee said: ‘As soon as he left WWE – and I mean, similar to what it was like for me leaving. I mean, he was in a different boat when he was getting ready to leave WWE.

‘But having the duration of our relationship being together while we were in WWE – we met there, we spent seven years there together on the road at the same time.

‘So, seeing the way that he would function within WWE – but as soon as he left, seeing his love of wrestling come back was crazy.’

For Renee, she noticed a definite ‘shift’ in her husband after he moved on from the company, even before he decided to make the move to AEW – which he would do weeks after his WWE contract expired.

‘He really had a shift in his creativity. He would wake up super early excited to watch old matches, or thinking about different promotions he wanted to work in. And this was before he knew whether he was going to go to AEW, or what he was gonna do,’ she explained. 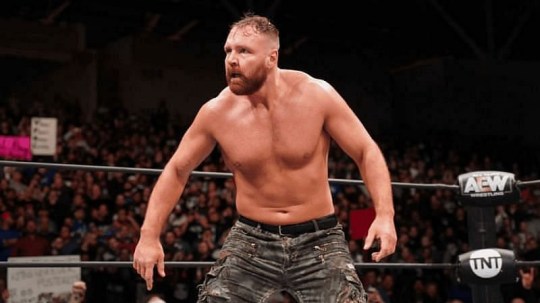 Moxley has thrived over the past couple of years (Photo: AEW)

‘But all he knew was that the world was blasted wide open for him and he could do whatever he wanted. So just really seeing that spark reignite in him, that pumped me up! I was like, “Damn – look at you go!” ‘

The 35-year-old broadcaster spent eight years in WWE before her own departure last summer, and she admitted the schedule can often be repetitive.

She added: ‘Like, you get so in a rhythm when you’re doing the same thing over and over. Your schedule is what it is when you’re in WWE, so for him to be able to step away from that and breathe some fresh air – it’s been really cool to see him grow.’

For Renee, her marriage – and lifelong love for the business – means she knew stepping away from WWE wouldn’t mean leaving wrestling, particularly with plenty of her podcast guests coming from that world. 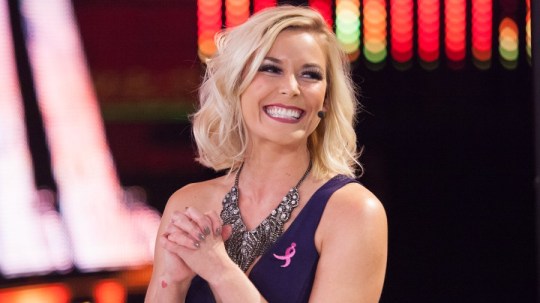 Renee noticed a different in her husband (Photo: WWE)

‘You know, given me household and what goes on here, there will always be a connection to wrestling for me,’ she said. ‘I’m able to do that through my podcast, which is amazing. I always knew that I’d still be around wrestling.’

Part of Jon’s renewed creativity manifested itself in his recent Exploding Barbed Wire Deathmatch against AEW World Champion Kenny Omega, with the latter retaining after a brutal bout.

‘It’s funny – it was tough for me to watch,’ she recalled, noting that she has confident in her man’s ability’s to know he’ll be as safe as possible. ‘I try not to overthink anything.

‘I have such a – my time around wrestling as well have given me so much insight as to what to look for. I remember when I first started with WWE and I would be doing the Kickoff shows, and he would be having these matches.

‘It was really hard for me to tell what would really hurt him, and what not. I would always keep looking at Booker T to watch his reactions to see what he thought.

‘Booker was always my measuring stick to see how he was doing. Watching the Exploding Barbed Wire Deathmatch, I Was really happy for the work that him and Kenny put into that match. The match itself was spectacular!’

The ending of the match drew some ridicule from fans and reviewers after the planned epic explosion didn’t quite come into fruition, but Renee shrugged it off as the perils of live television.

She smiled: ‘What are you gonna do? Stuff just gets out of your control and everything that was in their control, they absolutely crushed. I think that’s all you can really take away from that – s**t happens.’

Of course, the moment hasn’t taken away from any of Jon’s accomplishments with numerous title reigns and critically acclaimed bouts under his belt.

‘It’s just such a reminder to bet on yourself,’ she said, reflecting on his WWE exit and move to AEW. ‘When you really believe in yourself and you know that there’s other things that you want to achieve, so just lean into that and swing for the fences.

‘He’s done all of that and he’s just accomplished so much. He’s getting his flowers now, it’s so awesome!’

*Renee Paquette hosts the Oral Sessions, and her cookbook Messy In The Kitchen will be released in May.