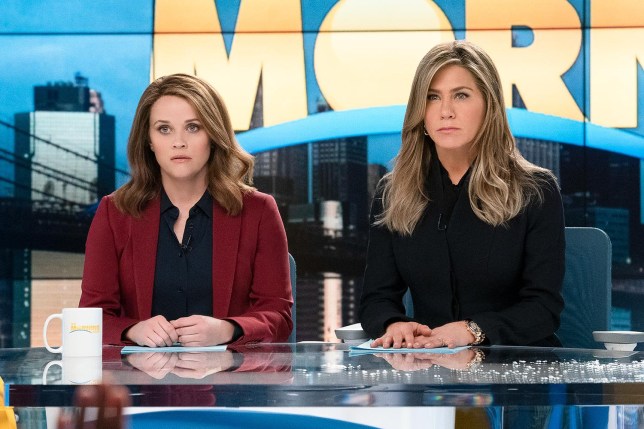 Reese Witherspoon looked pretty chipper as she returned to work on The Morning Show season two.

The actress will reprise her role as persistent TV anchor Bradley Jackson in the hit Apple TV series and shared the first photo from set on Thursday.

In the snap, Reese is seen sitting on the steps of her trailer wearing a denim shirt underneath a green chequered jumper, jeans and trainers with a pair of sunglasses to finish off her look.

It seems Reese might not be as accustomed to the early starts like her character as she held a cup of coffee with ‘wakey wakey’ on the front. However she was in the best mood flashing a bright smile for the camera.

‘Wakey wakey. It’s back to work! @themorningshow ☕️,’ she captioned the photo.

Actress Jennifer Garner was just as excited as the rest of us to see production begin on the new season, as she commented: ‘Good morning, you’re Cute. ♥️.’

Reese held the season two script in her lap but, of course, didn’t drop any teasers about what fans can expect from Bradley and her co-anchor Alex Levy (Jennifer Aniston) next.

His on-air partner of 15 years, Alex, is then forced to step up and host the show alongside Bradley despite their different approaches to presenting the news.

Season one ended on quite a cliffhanger with show booker Hannah (Gugu Mbatha-Raw) tragically found dead following an overdose in her apartment. She had been a victim of Mitch’s and struggled to overcome her trauma following the sexual assault.

After news of Hannah’s death broke at the station, Alex has an on-air meltdown of epic proportions exposing the network’s boss for covering up Mitch’s behaviour.

So needless to say, season two should hit the ground running.

Addressing where the show could go after the events of the season one finale, Reese said earlier this year: ‘I feel like at the end of these 10 episodes, there’s a whole new world order. It’s chaos.

‘No one knows who is in charge and what leadership means at this point. I think that’s what we’re exploring in the culture right now as it goes topsy turvy, what is the new normal?’

The Morning Show will return to Apple TV+.