Raye has claimed that her record label has been preventing her from releasing her first album for over seven years.

The singer said she is ‘feeling so alone’, alleging that she’s waiting for confirmation from her bosses that she’s ‘good enough’ to put out a compilation should her latest single Call On Me perform well in the charts.

Breaking her silence in a series of tweets, Raye wrote: ‘I have been signed to a major label since 2014…and I have had albums on albums of music sat in folders collecting dust, songs I am now giving away to A list artists because I am still awaiting confirmation that I am good enough to release an album.

‘For context, in order for an album to be created, the label has to release money for songs to be finished, fees for producers, mixes, masters and marketing support etc… I have waited 7 years for this day and I am still waiting.’

In another post, Raye continued: ‘So now I’m being told if Call On Me does well then I can do my album but there can’t be a green light until…. imagine the PRESSURE of me waking up every day frantically looking at numbers and stats hoping that I can just make MY BLOODY FIRST ALBUM.

‘I know this is the kind of thing I’m suppose to keep behind closed doors, but I have worked and waited and hustled and given EVERYthing I have and if I am going to suffer I am NOT going to do it in silence anymore. 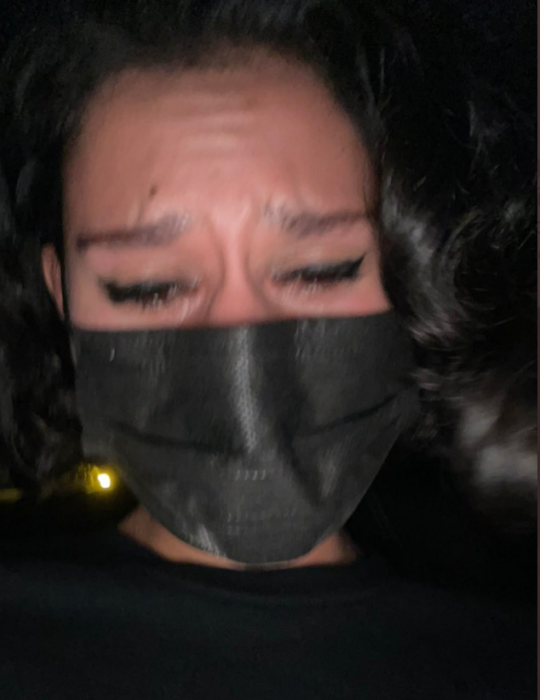 Raye uploaded a picture of her crying as she opened up about her mental health (Picture: Twitter)

‘I have been on a 4 ALBUM RECORD DEAL since 2014 !!! And haven’t been allowed to put out one album. ALL I CARE ABOUT is the music. Im sick of being slept on and I’m sick of being in pain about it this is not business to me this so personal.’

Raye also uploaded a selfie of herself in tears to the social media platform, alleging she had been waking up in tears for the past week. 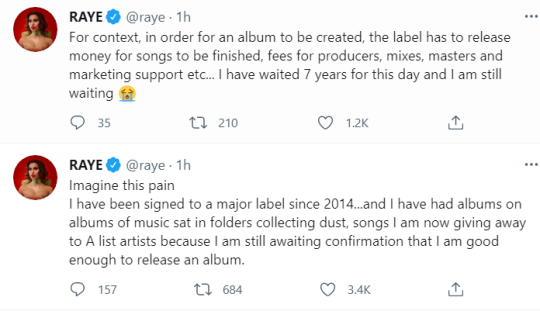 ‘I have become such an expert at hiding my tears and my pain and I wanted to talk about it today,’ she said.

‘I’ve done everything they asked me, I switched genres, I worked 7 days a week, ask anyone in the music game, they know. I’m done being a polite pop star. I want to make my album now, please that is all I want.’

Raye’s music breakthrough happened in 2016 when she featured on Jonas Blue’s single You Don’t Know Me and By Your Side by Jax Jones, the latter peaking at number three on the UK Singles Chart.

I just tried calling you @raye but, Iâm gonna tell everyone on here the exact same thing. Raye is one of our countryâs best PERIOD. There is no reason her light should be dimmed or she should be made to feel her HARD WORK is in vain. https://t.co/JzGewMo2C1

ugh hate this, i support u @Raye. My advice is to make the entire thing, artwork/font/music/everything. Tell them to pay everyone & scream at them till they release it. If u played nice then get mean coz u have hits & ur a great artist & they work for u not the other way around https://t.co/rUM5MagakJ

A year later, she was short-listed for the BBC Music Sound of… award and was named in third place.

On June 11, Raye released the lead single, Call On Me, from her upcoming debut studio album.

Many artists voiced their support following Raye’s claims, with Charlie XCX saying she ‘hates this’.

‘My advice is to make the entire thing, artwork/font/music/everything,’ she wrote. ‘Tell them to pay everyone & scream at them till they release it. If u played nice then get mean coz u have hits & ur a great artist & they work for u not the other way around.’