Raiders of the Lost Ark star Karen Allen has shot down accusations Indiana Jones was a paedophile, right as Harrison Ford gets back on set for the latest film in the franchise.

The 1981 film has been under scrutiny in recent years over the age difference between Harrison’s Indiana and Karen’s character Marion Ravenwood, who had a run-in with the archaeologist years after their initial romance.

It was the love interest’s reference to her being a ‘child’ that seemed to cause many to furrow their brow in bewilderment, as she said when confronting the titular character in the iconic film: ‘I’ve learned to hate you in the last 10 years. I was a child. I was in love.’

Indiana replied: ‘You knew what you were doing.’

There’s little else said about it, but it’s been implied Marion was 16 at the time of their meeting, with Indiana in his late 20s.

However with transcripts between director Steven Spielberg, George Lucas and screenwriter Lawrence Kasdan reportedly suggesting the pair had a major age gap, some have accused Indy of having a fling with Marion when she was a minor. 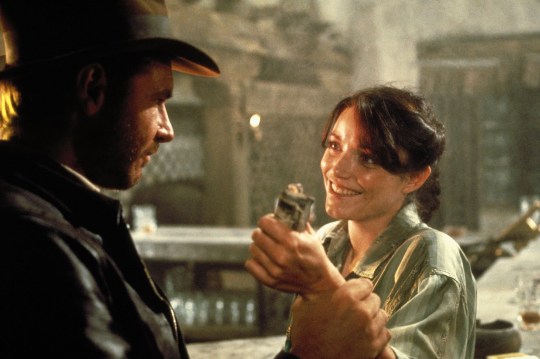 Indiana and Marion had been together 10 years before (Picture: Lucasfilm Ltd/Paramount/Kobal/Sh)

Responding to the furore that Indiana had an improper relationship and the potential ‘sinister undertones’ of their first fling, actress Karen has insisted that was not the case.

In an interview with UpRoxx for the 40th anniversary of the film, she said: ‘I think I say I was 16. I don’t know. That’s always what I imagined is she was 16, he was 26. And he was her father’s student. And it’s left very mysterious.’

She went on, adding she felt the situation was ‘innocent’: ‘We don’t even know what it is. I mean, they could have kissed a few times, and she was just completely bowled over, and he could have just not wanted to get involved with someone so young.

‘And maybe my father would have been furious at him. I mean, what’s great about it is we don’t know what the circumstances are.’

Karen added: ‘I don’t think of him as a paedophile. That’s the direction some of these people are going.’

Her turn in the first film wasn’t the only time we saw Marion, with Karen returning for the fourth instalment of the franchise, Indiana Jones and the Kingdom of the Crystal Skull, before going on to marry Indiana.

It comes as Harrison was seen back in his Indy get-up for the first time in over a decade, as he got to filming the as yet untitled fifth Indiana Jones film in Northumberland.