Keeping her loved ones close. Queen Elizabeth II gave a sweet nod to her late husband, Prince Philip, during her first public appearance of 2022.

The monarch, 95, attended a private event at her Sandringham Estate on Saturday, February 5, carrying a cane that Prince Philip used prior to his death. The sentimental accessory was on hand as Queen Elizabeth received guests and gifts to celebrate the 70th anniversary of her Accession Day. She will celebrate her Platinum Jubilee in June.

“I recognized the stick instantly as it was always kept in a pot by the front door. It was the Duke’s stick, and it is very touching that the Queen has started using it,” the late Duke of Edinburgh’s biographer, Gyles Brandreth, told the UK’s Telegraph. Prince Philip was last seen using the walking stick in 2013, but reportedly used it in private during his day-to-day life at Sandringham.

Prince Philip died in April 2021 at the age of 99. Buckingham Palace confirmed that the prince consort “passed away peacefully” at his home in Windsor Castle on April 9. “The Royal Family join with people around the world in mourning his loss,” the official statement read. Sir Huw Thomas, head of the royal medical household and physician to Queen Elizabeth II, signed off on the death certificate. 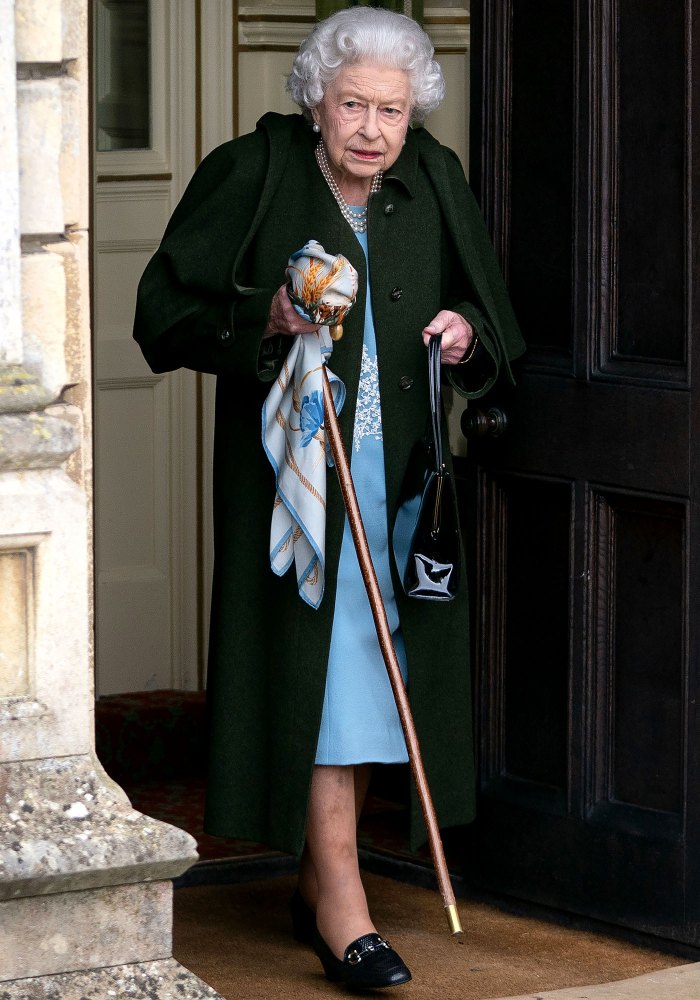 Since his death, Queen Elizabeth has been open about her grief over losing her husband of 74 years. The long-reigning royal paid tribute to him during her annual Christmas broadcast, acknowledging that “this year, especially” she understood how difficult some people find the holiday season.

“For me, in the months since the death of my beloved Philip, I have drawn great comfort from the warmth and affection of the many tributes to his life and work – from around the country, the Commonwealth and the world,” she said in her speech.

Her Majesty also wore a sapphire chrysanthemum brooch during her speech, which she first wore on her honeymoon with Prince Philip in 1947. Queen Elizabeth also wore the jewelry to celebrate their 70th wedding anniversary in November 2017 and she had a portrait from that celebration on her desk while addressing the British public.

“His sense of service, intellectual curiosity and capacity to squeeze fun out of any situation – were all irrepressible,” the queen continued. “That mischievous, enquiring twinkle was as bright at the end as when I first set eyes on him. But life, of course, consists of final partings as well as first meetings; and as much as I and my family miss him, I know he would want us to enjoy Christmas.”

Elizabeth also honored her late partner in her Accession Day message, which she shared on February 5. In her statement, the sovereign shared her “sincere wish” that Camilla, the Duchess of Cornwall, receive the title of Queen Consort when her son, Prince Charles, ascends to the throne.

She continued: “I was blessed that in Prince Philip I had a partner willing to carry out the role of consort and unselfishly make the sacrifices that go with it. It is a role I saw my own mother perform during my father’s reign.”