“We were pleased to welcome Her Royal Highness Princess Anne to the #StatenIslandFerry today,” the official Twitter account for New York City’s Department of Transportation wrote on Tuesday, October 4, sharing a photo of the 72-year-old royal riding on the ferry.

After arriving in the NYC borough, Anne visited the National Lighthouse Museum. During her tour, the organization named her the honorary chair of its “Illuminating Future Generations” campaign.

“I think lighthouses have been a particularly good way of educating people about the importance of maritime in all its formats,” Anne said on Tuesday, according to the Staten Island Advance, calling the museum a “tremendously good way” of engaging young patrons. “It’s not just about trade, but the impact of what we do to the sea, and how we can look after it better, and the way in which it affects our lives.” 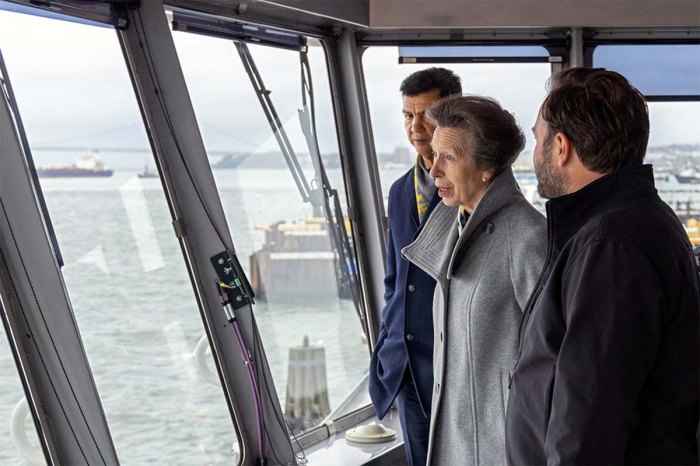 She added: “The lighthouse still has a really important part to play. The story that goes with lighthouses and how we got here is just as important, and [the] museum has made an astonishing impact in telling that story. What you do needs scope, to tell more of that story. The campaign for Illuminating Future Generations is highly imaginative and has real scope for the future, not just here [in New York City]. I can only wish you well.”

The princess’ New York trip marks her first overseas outing since the long-reigning sovereign, her mother, died on September 8 at the age of 96.

“I was fortunate to share the last 24 hours of my dearest Mother’s life. It has been an honor and a privilege to accompany her on her final journeys,” Anne wrote in an Instagram statement several days later, noting she was at Elizabeth’s Balmoral Castle bedside when she passed away. “Witnessing the love and respect shown by so many on these journeys has been both humbling and uplifting. We will all share unique memories. I offer my thanks to each and every one who share our sense of loss.”

She concluded her post at the time: “We may have been reminded how much of her presence and contribution to our national identity we took for granted. I am also so grateful for the support and understanding offered to my dear brother Charles as he accepts the added responsibilities of The Monarch. To my mother, The Queen, thank you.”

The equestrian, members of the royal family and the United Kingdom said their final goodbyes to the late regent during her state funeral on September 19. Anne joined her brothers — King Charles III, Prince Andrew and Prince Edward — as they marched behind the queen’s casket for her Westminster Abbey memorial before attending a committal service at St. George’s Chapel at Windsor Castle.

Elizabeth and her husband — Prince Philip, who died in April 2021 at the age of 99 — were laid to rest together in the King George VI Memorial Chapel alongside her parents, George VI and Elizabeth.