Heading home. Prince Harry and Meghan Markle are expected to leave the United Kingdom shortly after attending Queen Elizabeth II‘s state funeral and committal service because they are anxious to see their children, a source exclusively tells Us Weekly.

“Meghan and Harry are preparing to return to Montecito almost immediately after the funeral, where they’ll be reunited with Archie and Lilibet after being separated for over two weeks,” the insider reveals to Us, noting it’s “the longest amount of time they’ve been apart from their children.”

The Duke and Duchess of Sussex, who share son Archie, 3, and daughter Lilibet, 15 months, embarked on their trip to Europe on September 4, initially planning to speak at a series of philanthropic events. While their original plan was to spend less than a week across the pond, they extended their stay after the queen’s death on September 8, reuniting with the royal family to grieve.

“They’ve missed the kids like crazy and have been FaceTiming them every day, but can’t wait to see and hold them again after a poignant few weeks,” the insider tells Us.

Harry rushed to the queen’s side as her health declined but he didn’t make it in time to say goodbye before she passed. Reports alleged that the Invictus Games founder, 38, was informed that his grandmother died only five minutes before the official announcement on September 8 — and was the “last to know.” King Charles III allegedly called Harry when he was still on his way to Balmoral Castle in Scotland, and by the time he landed, Buckingham Palace had informed the public of the queen’s death.

A spokesperson for the king reacted to the reports in a statement to the Daily Mail on Sunday, September 18, hours before the queen’s state funeral on Monday, September 19. “The public was only informed after every family member had been informed,” the statement read, without confirming or denying when Harry was informed.

Since the announcement, Harry and Meghan, 41, have reunited with the royal family for several outings and ceremonies. On September 10, they joined Prince William and Princess Kate in speaking to mourners at Windsor. Four days later, they made another public appearance at the service to start the queen’s lying in state at Westminster Hall.

The brothers also stood guard at the queen’s coffin for the grandchildren’s vigil on Saturday, September 17. The weekend appearance marked the only time Harry was allowed to wear his military uniform.

Harry was stripped of his titles when he and Meghan stepped back from their senior royal duties in 2020. Buckingham Palace announced that neither he nor Prince Andrew, who lost his titles after being accused of sexual assault, would be allowed to wear military regalia. However, they made an exception amid backlash, with many noting that the circumstances under which Andrew and Harry lost their honorary military titles were extremely different.

The Duke of Sussex, who completed two tours of duty in Afghanistan and served 10 years in the army, was allowed to wear his dress uniform for the grandchildren’s vigil on Saturday. However, unlike brother William, Harry’s uniform did not bear his grandmother’s initials on the shoulder. 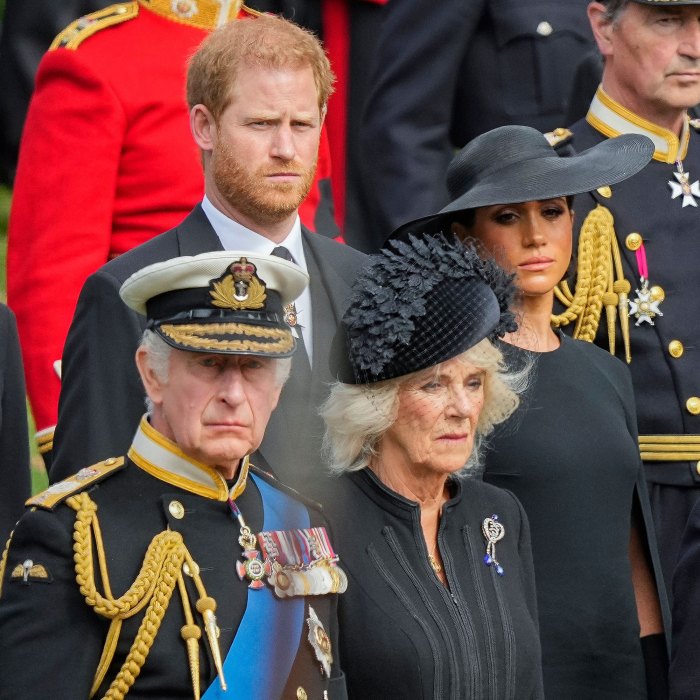 Despite some hiccups, royal expert Myko Clelland told Us that this has been a time for the family to mend their fractured relationships. A rift between the brothers only widened after Harry and Meghan stepped down as senior royals and got worse after the Archewell cofounders’ bombshell tell-all CBS interview in March 2021.

“We’ve seen the brothers out together, and we’ve seen them sitting near each other at occasions. And I’m sure they must have talked behind closed doors as well,” Clelland noted, explaining that the family extended “a number of olive branches” to Harry in the days following the queen’s passing. “I think now is the time grief brings families together, and we’ve seen this coming together. So, if it’s going to happen, I think now is the best possible chance.”

Those peace offerings included William invitation for Meghan and Harry to make their appearance in Windsor greeting mourners with him and Kate, 40, as well as Charles’ decision to mention his younger son and American daughter-in-law in his inaugural speech as the new monarch.

“I want also to express my love for Harry and Meghan, as they continue to build their lives overseas,” the king, 73, stated in the September 9 address.