Goal! It can be exciting to watch a soccer team score a goal, especially during a championship match. Prince George adorably captured that joy while taking in the Euro 2020 final with his parents, Prince William and Duchess Kate.

The young royal, 7, watched the game at Wembley Stadium during the England v. Italy final on Sunday, July 11. George and William, 39, wore matching suits and ties while in attendance while Kate, 39, opted for a white blazer look.

England fans watching the game on television were quick to note the prince had an adorable on-camera reaction, and they shared a clip via Twitter. In the clip, George laughed and clapped as the home team scored a goal. As George cheered on the athletes, he looked back at his dad and they shared in their mutual excitement during the sweet exchange.

ITV News reporter Chris Ship shared the now-viral tweet with the caption, “The country felt similar to Prince George” in response to the nation’s collective joy over the results of the game.

Another fan on Twitter shared a sweet pic of George giving his mom a big hug when the British team scored another goal.

George also attended England’s soccer game against Germany on June 29 with both his parents. While Kate wore a white T-shirt, red blazer and black slacks, William and George matched in navy suits with striped ties.

George has been a soccer fan for a while. In July 2020, while appearing on the “That Peter Crouch Podcast,” William joked that his eldest son could “definitely have a future in professional soccer.

“I reckon he could be [Aston Villa’s] all-time leading goal scorer,” the Duke of Cambridge said at the time. “I can see no reason why not. It would be brilliant.” 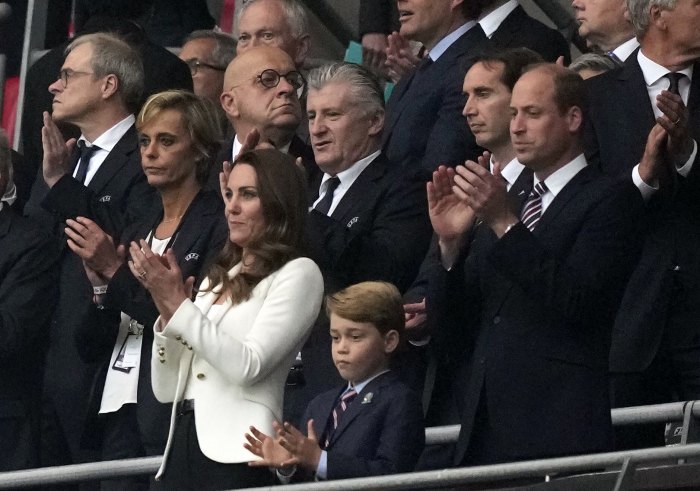 While William remained hopeful about his son’s soccer abilities, he did reveal that he’s “trying not to persuade” George into liking a particular team.

“I’m letting him choose his own way. It’s about finding what fits for him,” William continued. “I do like the values and the ethos of the club. I want them to look after the players and set a good example to the young fans. I want our children, when they go to the match, to come away loving what they’ve seen, enjoying it and seeing their role models behave in a way that we’d all want them to.”

In February 2019, the Duchess of Cambridge also remarked about the young prince’s interest in the sport, according to The Telegraph.

“I should have picked up some tips from George,” she reportedly told a group of schoolchildren practicing drills in Northern Ireland. She also told the team that George likes to practice at home and tells her, “Mummy, you’re so rubbish” when she attempts to join in.