Rapper Post Malone was taken to the hospital after experiencing pain during his “Twelve Carat Tour.”

“Boston, I love y’all so f—king much,” the “Sunflower” performer, 27, wrote in a Saturday, September 24, Twitter statement. “On tour, I usually wake up around 4 o’clock PM, and today I woke up to cracking sounds on the right side of my body.”

He continued: “I felt so good last night, but today it felt so different than it has before. I’m having a very difficult time breathing, and there’s like a stabbing pain whenever I breathe or move. We’re in the hospital now, but with this pain, I can’t do the show tonight.” 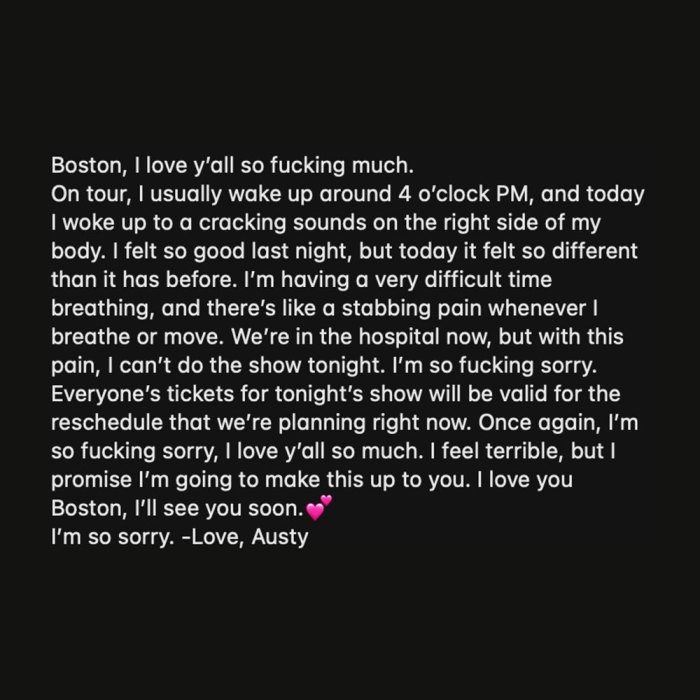 While Malone didn’t further share an update on his condition or a medical diagnosis, he was disappointed that his hospitalization meant he had to cancel his tour stop at Boston’s TD Garden.

“I’m so f—king sorry,” he concluded his social media statement. “Everyone’s tickets for tonight’s show will be valid for the reschedule that we’re planning right now. Once again, I’m so f–king sorry, I love y’all so much. I feel terrible, but I promise I’m going to make this up to you. I love you Boston, I’ll see you soon. I’m so sorry. Love, Austy.”

The New York native’s health scare comes one week after he was injured while falling on stage. As Malone performed “Circles” during his September 17 show at St. Louis, Missouri’s Enterprise Center venue, he fell off the stage.

“Hey St. Louis, f—king love you guys. Thank you for the patience,” he said in a Twitter video shared several hours later. “Thank you for putting up with my dumb ass. … Whenever we do the acoustic part of the show, the guitars and the guitar stand goes down and there’s this bigass hole.”

Malone noted at the time that it “winded me pretty good,” but he received pain medications during an emergency room visit. “Everything is good,” he quipped before promising St. Louis fans a two-hour show next time he returns to town.

The “Better Now” rapper had kicked off his “Twelve Carat Tour” earlier this month, which is scheduled to run through November 16.

In addition to his successful music career, Malone has a new role as a father after his mystery fiancée gave birth to the pair’s first child earlier this year.

“I woke up at 2:30 in the afternoon, I went and I kissed my baby girl and then I went to play some video games,” the “Rockstar” artist confirmed his little one’s arrival during an appearance on The Howard Stern Show in June, noting he wants to keep her out of the spotlight. “Yeah, I want to let her make her own decisions. That’s it.”