Let’s Build a Zoo is, on the surface, a fairly standard version of a zoo-building sim. Probably the most standout part of it at first glance comes from the graphical style, which lovingly renders all of the adorable, and not so adorable animals in pixel art. It adds a layer of innate cuddliness to everything, which helps a lot when you’re theoretically going to be looking after hundreds of animals. Appearances can be incredibly deceiving though, and that’s very much the case here.

When you first start off, you’ll do so by getting a gift of animals from another zoo. This’ll allow you to earn a little bit of money, then start making relationships with other zoos, and either buy animals from them, or trade your own. Of course, your stock of animals is constantly in flux as these are living things that have a lot of sex, and then die. Each of the animals has a lot of variants too, so there might be ten different kinds of pig, for example, and you can unlock the full genome of any animal by breeding or buying every variant.

This is one of the big things that makes Let’s Build a Zoo very different from what you’ll have likely played before. Once you’ve unlocked the full genome of two animals, you can begin producing hybrids. This sounds horrifying – and unethical – but it’s not. In essence, you plonk one animal’s head onto another, and then you get things like the glorious Duckybara, a mixture of a duck and a capybara. It’s something you can do whether you choose to play as a good zookeeper or an evil zookeeper too, so don’t fret either way.

The two paths are very obvious when it comes to morality. A good zookeeper will make sure they’re producing clean energy, looking after their animals, and trying to improve the numbers in the wild by releasing strong specimens. It also means you’ll be trying to produce your own food using a farm, and even offsetting the CO2 put out by your busses by filling your park with trees. I find myself innately drawn to being as kind as possible in games because I end up feeling guilty otherwise, so I went down this path. 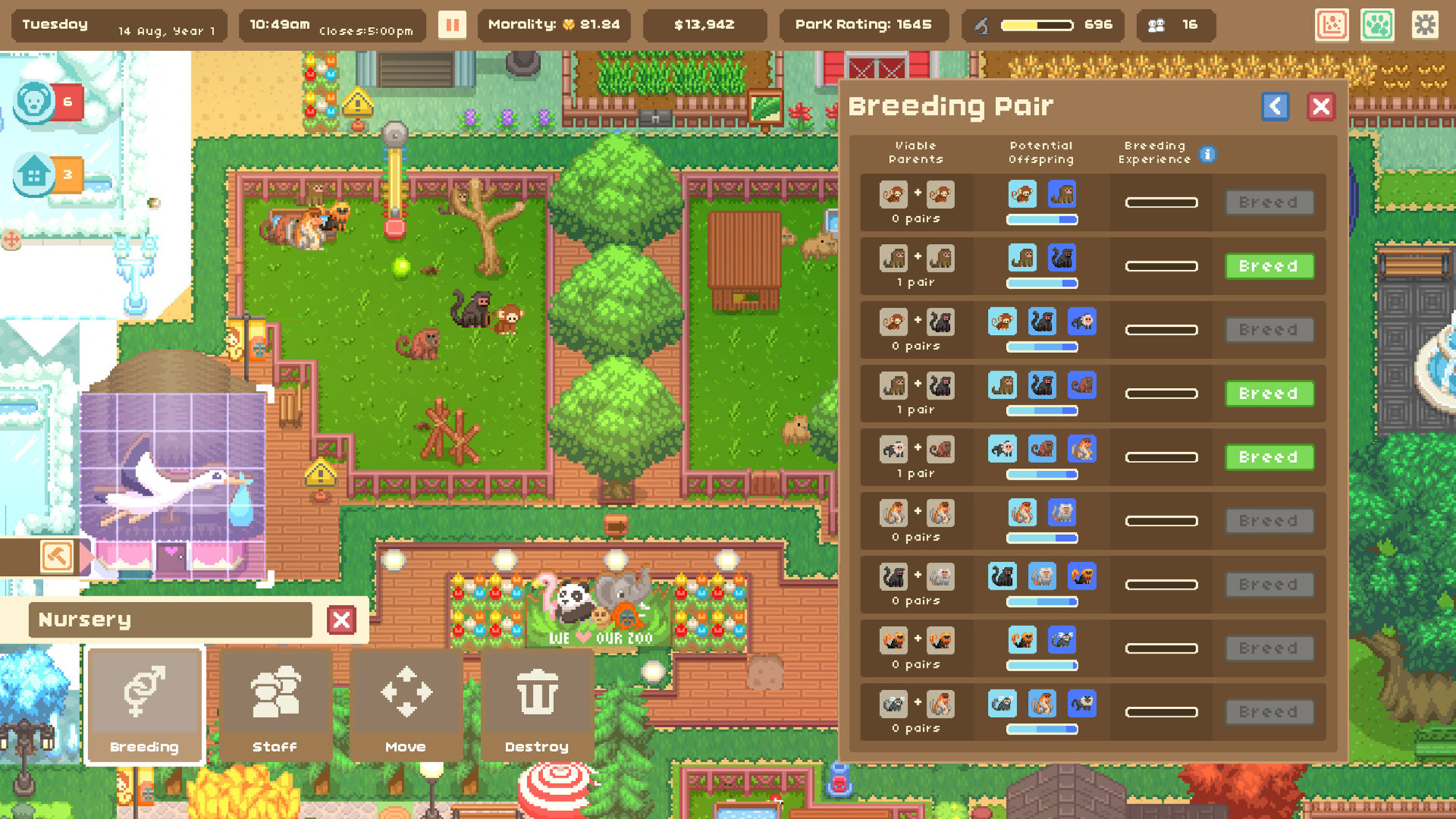 The good path is littered, well, not littered, but replete with ways to be a force for good in not just your own zoo, but also the world in general. It feels good to give your animals trampolines and ropes to play with, and making sure they’re happy will lead to them living longer, and visitors being happier. If, on the other hand, you’d rather go down the path that’s keen on making money and efficiency above all else, then you’ll probably want to go down the less ethical route.

This route will have you recycling sewage water to feed to your animals. It’ll also mean you can siphon energy instead of creating it, and even use your animals as livestock for glue factories or food production. Plus, rather than just dealing with other zoos, you can deal with exotic animal traders too, or even paint a duck to look like a peacock. You’re not going to win any awards doing this, but you’ll be rolling in the money, and if an animal killed your parents as part of your supervillain origin story, then maybe this will appeal. 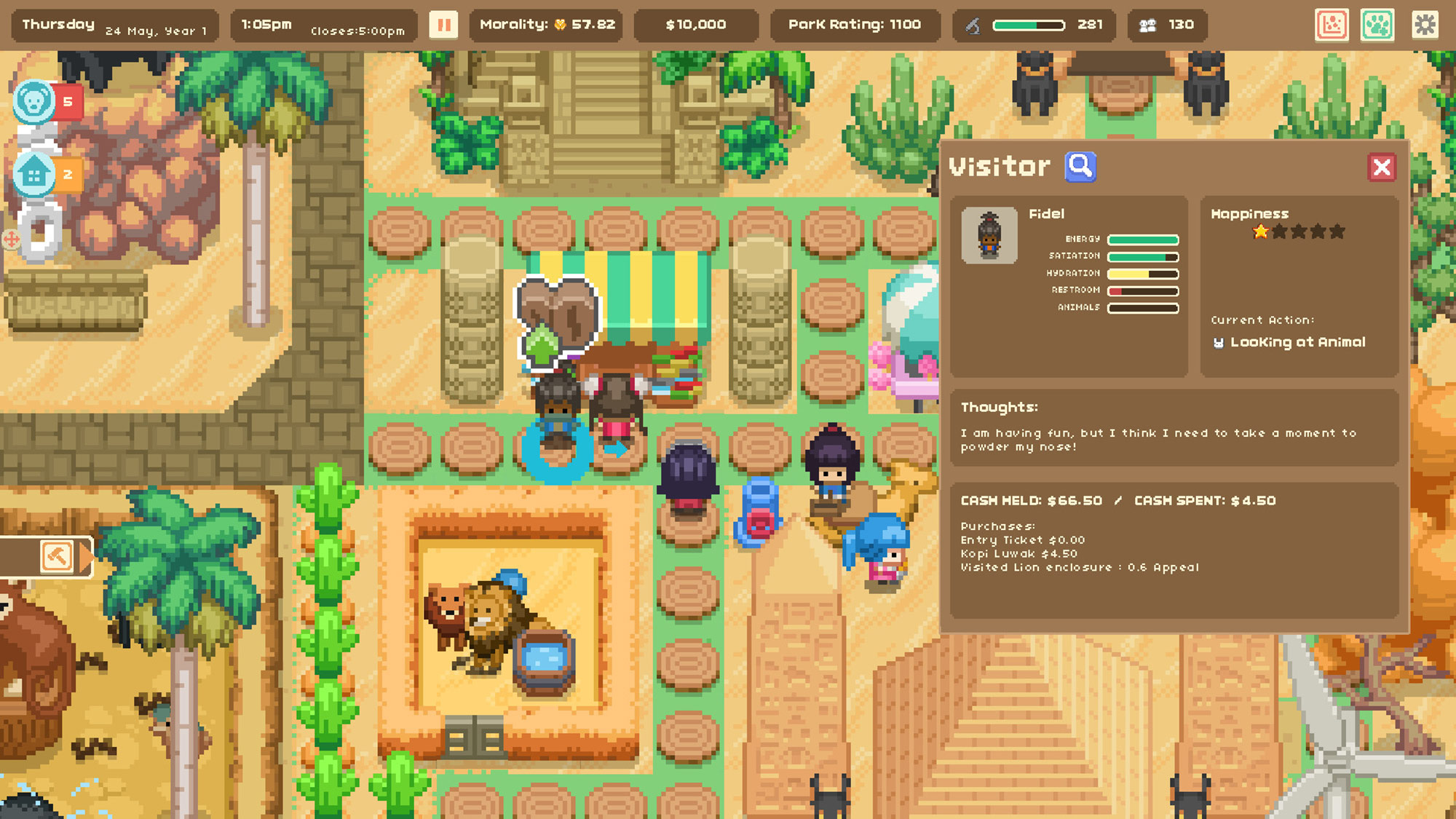 It’s not just the decisions you make to be good or evil that matter though. Various events will happen that’ll offer you a chance to take on new tasks, or even gain new benefits. For example, if you keep your animals really happy, you can earn passive bonuses to your income or visitor count every so often. You can even get featured on ZooTube, and looking good means you’ll see a rise in publicity too.

As you unlock new things via research, you can add them to your zoo. Morality affects what you can unlock, but this is how you’ll be able to add new food stores, transport methods, or enclosures to your zoo. You’ll also need to buy new land fairly often too. Otherwise, you’ll find you quickly run out of space for everything you can build, and restrictions are never good when you’re trying to keep your animals happy/turn them into chairs.

While this all sounds like a lot, one of my favourite things about Let’s Build a Zoo is that I never actually felt pressured to expand too quickly. It feels as though you can easily speedrun into a massive zoo as soon as you want too, but likewise, you can also take things at your own pace and just familiarise yourself with all of the systems before adding anything else to your plate.

Where it not for this pacing choice, I’d be writing this review and telling you all that the game throws too much at you too quickly. Instead, I’m amazed by how well Let’s Build a Zoo manages you, without ever really giving you explicit instructions. Just as I was getting annoyed by not being able to release multiple animals at a time, I gained the ability to release groups of them into the wild. As I found myself wishing for a better way to figure out what research to go for, I noticed the filters that highlighted transport, or enclosure types, or food stalls.

I do think there is a lot going on here, and I do think a bit more hand-holding wouldn’t have killed or annoyed me, but it’s also fairly intuitive most of the time. The only thing that ever wound me up was a message saying my zookeepers were getting stuck, but not showing me where, and never seemingly lasting for long. Aside from that, I’m genuinely taken with Let’s Build a Zoo in a way that most sim games just don’t manage. It’s adorable, it’s a little maniacal, and it’s the first game in a while that I found myself accidentally spending four hours in while reviewing it. That’s high praise.

Let’s Build A Zoo is out on Steam on November 5. We played it on PC.

Let’s Build a Zoo is a funny and intelligent take on the zoo sim that’ll have you micromanaging everything in your sight, but somehow never overwhelms. It’s cute, the music is great, and the morality system adds in replayability that can sometimes be lacking in this genre.