Piers has been a vocal critic of Meghan Markle for a long time (Picture: AP/Rex)

Piers Morgan hasn’t taken long to share his two pence worth over Meghan Markle’s interview on The Ellen DeGeneres Show, comparing her to a ‘desperate reality star’ for taking part in a playful skit.

During the Duchess of Sussex’s latest TV appearance, she joined her friend Ellen to talk about her life with Prince Harry and their children Archie and Lilibet, who was born in June this year.

At one point in the show, Meghan, 40, participated in a segment that saw her wear a secret earpiece, with the talk show host feeding her instructions on what to say and how to act.

Under Ellen’s orders, the former Suits actor squatted in public, claimed she had ‘healing powers’ and drank milk from a baby bottle, all of which the studio audience found amusing to watch.

However, Piers, 56, did not see the funny side of the matter, claiming in a new column written for MailOnline that Meghan acted like a ‘gormless desperate reality TV starlet’. 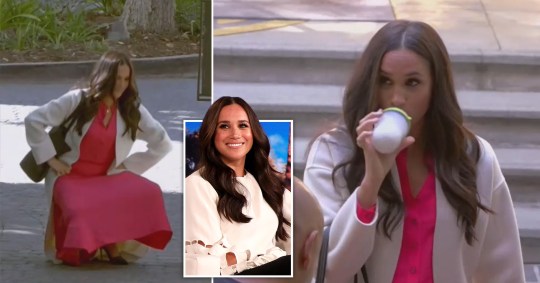 ‘But even a Kardashian would have deemed that street vendor stunt beneath them and brand-damaging. That’s how puerile and embarrassing it was.’

Piers said that he found the earpiece skit ‘soul-suckingly excruciating’, saying that it made him ‘genuinely want to puke’ and stating that it was ‘completely unacceptable’ for a member of the royal family to act in that manner.

Piers also described Meghan and Ellen as ‘nasty little bullies’, having made a remark about ‘bullying in the workplace’ on Twitter last night in response to their interview.

Meghan opened up to her friend Ellen about her life with Prince Harry (Picture: The Ellen Show/Backgrid)

Ellen’s final season of her talk show is currently airing a year after allegations of bullying and intimidation on the set of the programme were made.

The 63-year-old issued an apology, saying that she was ‘committed to ensuring this does not happen again’ while Warner Bros carried out an investigation.

In March, The Times reported that Meghan allegedly ‘humiliated’ staff on several occasions and drove out two personal assistants amid accusations of bullying, which she denied.

Buckingham Palace brought in an external legal team to assist its human resources team with an investigation into the allegations.

Earlier this year, Piers quit Good Morning Britain after more than 41,000 complaints were made to Ofcom about remarks he made concerning Meghan’s interview with Oprah Winfrey, when she discussed her mental health and previously suffering from suicidal thoughts.

After Meghan made a formal complaint to Ofcom, Piers was later cleared by the watchdog, after it concluded that he did not breach the broadcasting code.

The Ellen Show airs weekdays at 2pm on ITV2.