Ahead of Jon Snow’s final appearance on Channel 4 News tonight, his colleagues and peers have paid tribute to the incomparable broadcaster.

The 74-year-old announced he was stepping down as Channel 4 News host after 32 years – the longest serving presenter in the show’s history – in April this year.

He will remain on Channel 4 on a variety of other projects, as well as spending more time on his charity work.

Ahead of his final show on Thursday evening, Channel 4 News communications director Hayley Barlow shared a photo on Twitter of Snow looking out across the newsroom.

She wrote: ‘Going to be an emotional day, our last shift working together, before the Channel 4 News lights dim at 8pm.’

Piers Morgan mocked Snow’s ludicrous ties as he shared a throwback photo of the pair: ‘Farewell Snowy ⁦@jonsnowC4⁩ after 32 years at Channel 4 News. 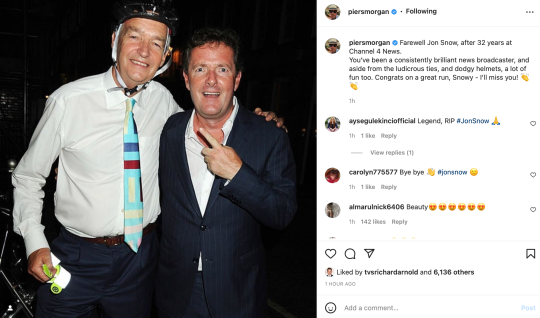 The legendary @jonsnowC4 presents @Channel4News for the last time tonight. A superb journalist, unique communicator and an inspiration to so many of us.

âOne day when the tonguing is done weâll take our leave and go.â

Weâll miss you so much Jon ðpic.twitter.com/bE9XVaBOpR

‘You’ve been a consistently brilliant news broadcaster, and aside from the ludicrous ties, and dodgy helmets, a lot of fun too. Congrats on a great run – I’ll miss you!’

He wrote on Twitter: ‘The legendary @jonsnowC4 presents @Channel4News for the last time tonight. A superb journalist, unique communicator and an inspiration to so many of us.’

Jon Snow has decided to step down as Channel 4 News presenter at the end of 2021.

Here’s a look back at a remarkable 32-year career presenting Channel 4 News from around the world, and 45 years as a journalist at ITN. pic.twitter.com/V0rW02ONHX

Referencing the lyrics of the shanty, he added: ‘”One day when the tonguing is done we’ll take our leave and go.”

Snow began his career at LBC in 1973 before jumping hip to ITV in 1976, where he served as as Washington correspondent and diplomatic editor.

He later became the main presenter of Channel 4 news in 1989, and has remained there ever since.

His final programme airs tonight on Channel 4 at 7pm.