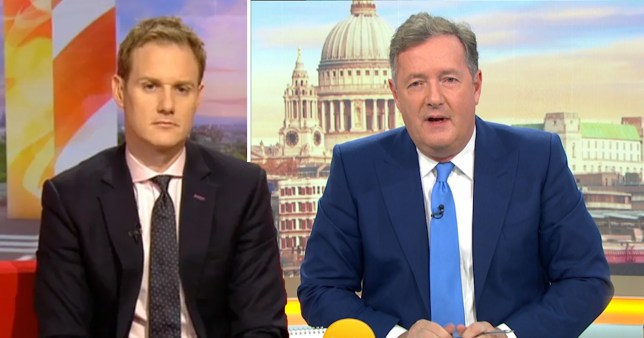 Piers Morgan has made yet another swipe at rival Dan Walker (Picture: BBC/ITV)

Piers Morgan has described BBC Breakfast’s Dan Walker as a ‘nasty piece of work fighting to get out’, adding even more fuel to their rivalry following his exit from Good Morning Britain.

Over the years, Piers, 56, and Dan, 44, have used their platforms on their respective news programmes to take very public swipes at each other on a regular basis, their feud intensifying with every cutting exchange.

When it was announced that Piers had quit ITV’s GMB following his criticisms of Meghan Markle’s Oprah Winfrey interview, Dan took the opportunity to rinse his competitor, tweeting: ‘Sorry to hear the news about your departure from GMB @piersmorgan. If you’d like to come on the UK’s number 1 breakfast show to talk about it… we could make some space for you in the morning.’

Dan later spoke out about their ‘friendly rivalry’ to The Times, telling the publication: ‘He likes to throw a few insults around, but underneath all the froth I think there is a decent bloke fighting to get out.’

While Piers could have taken this remark as a compliment, it appears he has done the exact opposite, stating in The Mail on Sunday: ‘My supremely virtuous former breakfast TV show rival Dan “Halo” Walker said about me today: “Underneath all the froth, I think there is a decent bloke fighting to get out”.’

‘Ironically, I’ve always thought that underneath all Dan’s faux saintly froth, there’s a nasty piece of work fighting to get out,’ he added, having dated this portion of his column Sunday March 28 when Dan’s comments were published. 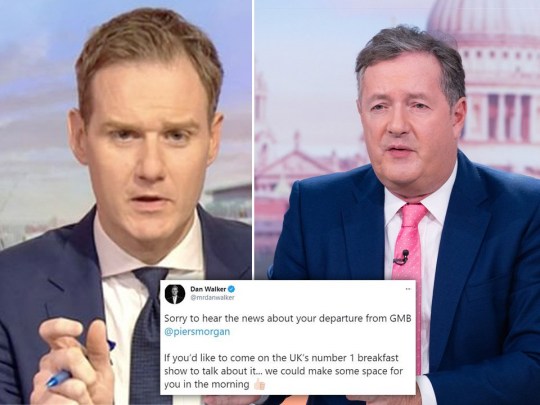 Piers added that he believes ‘the one thing guaranteed’ to have Dan ‘stamping on kittens is the knowledge that GMB finally overtook BBC Breakfast in the ratings, on his watch, on my last day’.

Piers cited a line that Dan previously said in The Sunday Times, where he said that ‘five years in second place must hurt a bit’.

‘It did, yes,’ the Life Stories presenter added. ‘But fortunately, Mr Walker, your poodle-like simpering with Government Ministers single-handedly gifted me the gold medal and cured the pain!’

On Monday April 5, he’s set to give his first televised interview since quitting GMB, which will be conducted by Tucker Carlson on his Fox Nation show.