It seems Piers Morgan’s pause on Prince Harry and Meghan Markle amid their baby news is well and truly over as he slammed what he called their ‘ridiculous behaviour’ this week.

The former Good Morning Britain star appeared on Fox News in an interview with Sean Hannity when the inevitable question of the pair came up.

Only last week he was wishing the royals ‘every success’ as they welcomed their daughter, Lilibet Diana, however this week he was back at it as he told the pair to ‘stop their yapping’.

Piers said: ‘I think it’s time those two gave up their titles, stopped whining 24/7, and tried to take a leaf out of the book of the Queen, whose nickname Lilibet they’ve hijacked for their daughter.

‘Take a little tip from the Queen: less is more. If you want to be a royal, a member of the Royal Family, less is more.

These two are still a sore subject for Piers, it seems (Picture: AFP)

He went on: ‘These two want to have their royal cake and eat it. They’re very happy to trade off their royal titles, the Duke and Duchess of Sussex, when it comes to negotiating hundreds of millions of dollars with companies like Spotify and Netflix.

‘But at the same time they want the right to trash the Royal Family and the monarchy, and therefore the Queen, who’s the head of the monarchy, on global television repeatedly now. They keep doing this.

‘I think it’s sickening to people over here in the UK. We’ve just seen the Queen with the American president, Joe Biden, and you can see what a magnificent lady she is.’ 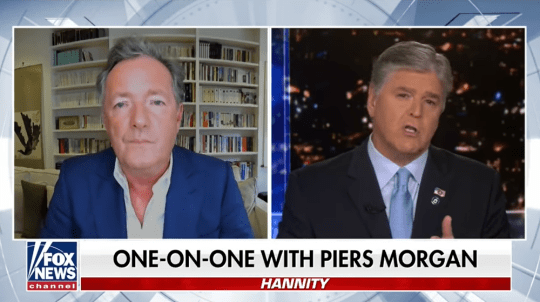 ‘It seems to me that Meghan and Harry don’t even understand the concept of duty. It is rankly hypocritical and I think it sticks in people’s gullets over here.’

His return to lashing out at the couple comes after Piers refused to put a ‘negative slant’ on the sweet news of their new baby – which came after he’d done an interview with 60 Minutes Australia which heavily focused on their row.

In fact, Piers went so far to wish them ‘every success’.

‘Maybe it’s their way of reaching out, as the Americans say, to the royals and wanting some kind of end to this on-running feud.’

He then shared his support for the parents, adding: ‘I always think when a new baby is born – I’ve had four myself – it’s very churlish to put any negative slant at such a moment.

‘I wish them all the very best. There is four in the family now. I wish them every success and a long and happy life.’

When asked by Allison Langdon: ‘So you like Meghan now?’ he quipped: ‘Let’s not go too far. I like her as much as she likes me.’