Holding each other tight! Pete Davidson and Phoebe Dynevor were photographed together for the first time since they started dating, and they definitely seem to be enjoying each other’s company.

In photos obtained by the Daily Mail, the pair could be seen grocery shopping and strolling through the U.K countryside while Davidson, 27, visited Dynevor, 26, in Manchester, U.K., where she’s currently living. The new couple giggled as they wrapped their arms around each other and smiled big in one another’s direction.

Us Weekly confirmed the pair are dating earlier this month. 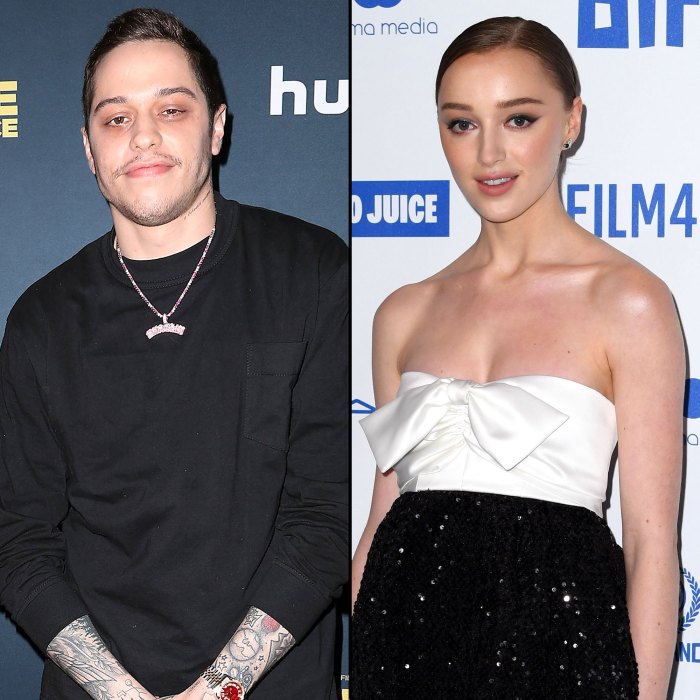 “Pete and Phoebe are still going strong despite not being able to physically spend time together,” a source told Us. “They keep in touch over text and FaceTime. Right now, they’re just focused on work. … They’re not looking to rush things.”

Although Dynevor is currently filming in the U.K. while Davidson lives in the U.S., the duo are “happy with each other,” the insider added. “He makes her laugh. Pete is a good guy and definitely a charmer. He’s easy-going and fun to be around.”

Rumors of a romance between the Saturday Night Live star and the Younger actress first swirled in February when Dynevor made a trip to New York. The following month, fans spotted them getting cozy in the U.K. on multiple occasions.

“It looked like they were in a relationship and they seemed happy together,” an onlooker told Us at the time. “[They were] holding hands and hugging each other.”

The New York native seemed to confirm the rumors on April 11 when he told Marquette University students he was with his “celebrity crush” while on a Zoom call. “That is all I can speak on,” he said when asked who his crush was.

The King of Staten Island actor was previously engaged to Ariana Grande from June to October 2018. Following his engagement, he was linked to Kate Beckinsale, Margaret Qualley and Kaia Gerber.

Dynevor, for her part, was previously linked to Simon Merrill and Sean Teale. After Bridgerton premiered in December 2020, fans were quick to speculate she was romantically involved with her costar and onscreen husband, Regé-Jean Page.

“I’d love to say there was really something between us, but no, it has always been strictly professional,” the Waterloo Road actress told You magazine in February.