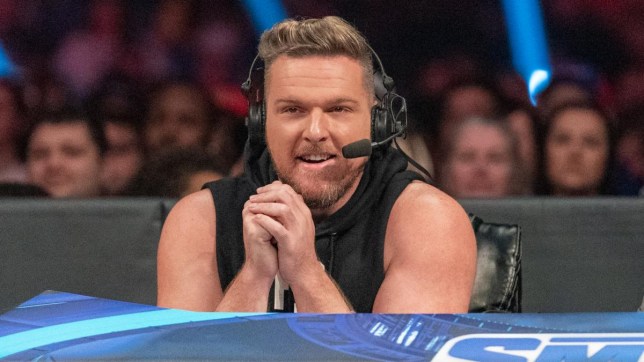 Business is about to pick up! (Photo: WWE)

NFL star Pat McAfee has joined WWE as the new SmackDown analyst amid a week of commentary shakeups.

The star – who has worked with the company a lot over the past few years and even made his in-ring debut in a highly acclaimed match against Adam Cole at NXT TakeOver 30 last year – will be in the hot seat starting with tonight’s show.

In a statement, the company said: ‘WWE today announced that Pat McAfee will debut as the new analyst for Friday Night SmackDown tonight at 8 pm ET live on FOX.’

As ever, the episode will air at 1am tonight on BT Sport 1 for fans in the UK.

Pat revealed the news on his Twitter account, as he wrote in a video: ‘A lot has happened pretty quickly here. A dream has come true. I’m joining the incredibly talented folks of Friday Night SmackDown working alongside Michael Cole on commentary.

‘An open mic, LIVE, in front of millllions… AND MILLIONS… of people every Friday.
‘I’m beyond pumped and grateful. Big thanks to Vince McMahon for the decades of entertainment, the opportunity, AND.. agreeing to appear in the his announcement video. Let’s do the damn thing’.

The video itself saw McMahon sat alongside Adam Pearce and Michael Cole, as he confirmed: ‘Pat McAfee – you’re hired!’

The move comes after veteran commentator Michael Cole’s previous broadcast partner Corey Graves moved back to Monday Night Raw as part of a reshuffle which sees him alongside Byron Saxton and Adnan Virk.

McAfee added: ‘For as long as I can remember WWE has been a company that I have admired, both for its incredible staying power of creating riveting entertainment and for its ability to connect people all over the globe.

‘I’ve been fortunate to try a lot of cool professions but working for WWE was the one I looked forward to most. I am incredibly honoured and grateful for the chance to give back to the business that has given me and many others so much and having the opportunity to sit at the same table that legends have graced is truly a dream come true.

Meanwhile, part of the shakeup has also seen wrestler Samoa Joe – who has been sitting on the Raw announce team – released from the company alongside more top stars.

In a brief statement on WWE.com, they said: ‘WWE has come to terms on the release of Samoa Joe, Billie Kay, Peyton Royce, Mickie James, Chelsea Green, Tucker, Kalisto, Bo Dallas, Wesley Blake and Mojo Rawley as of today April 15, 2021.

‘We wish them the best in all of their future endeavours.’