Ozark showrunner Chris Mundy has explained why both Darlene Snell (Lisa Emery) and Ruth’s cousin Wyatt Langmore (Charlie Tahan) had to be killed off in season 4 part 1.

The double murders in episode 7 shocked viewers, with the lovers shot dead by Javi Elizonndro (Alfonso Herrera) soon after tying the knot as he repeatedly warned them not to farm drugs.

Ruth discovered the slain couple in their home, with the ending hinting that she will be hellbent on revenge in the final episodes of the thrilling drama.

Shedding light on why the scenes were necessary, showrunner Mundy revealed it had a lot to do with setting up Ruth’s (Julia Garner) story arc for the next chapter.

‘It wasn’t something that was immediately planned, but a lot of it too had to do with Ruth and trying to get her to the most raw place we could get her,’ he said.

‘Obviously, that character has been through a lot in our four seasons on the show. But Wyatt was the thing she cared most about in the world and we really wanted to leave her going into the final little bit deciding, what’s he best path forward? 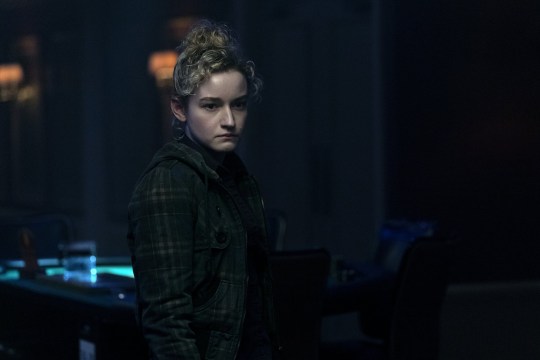 The deaths were necessary to set Ruth up for the grand finale (Picture: Netflix)

Mundy continued to Entertainment Weekly: ‘We wanted to bring her to the most emotional place she could get, and the only way to do that was through Wyatt.

‘And so, Wyatt was kind of collateral damage, to Darlene, but also story-wise. It was the only thing that could possibly lay Ruth that low. And then Julia delivered on that emotion, so much at that end.’

Fans will have to sit tight until season four part two is released to see just how Ruth responds to Wyatt and Darlene’s murders.

Will she seek revenge, or will she quit the business altogether?

Ozark is available to stream on Netflix.