For such a pretty game, Out There: Oceans Of Time makes it hard to enjoy sightseeing. An adventure game with roguelike elements, the spacefaring game is about cruising the galaxy and picking up the pieces of a major accident that occurs at the beginning of your journey.

Out There plays like fellow sci-fi roguelike Faster Than Light, albeit with a more expansive storyline. You’ll spend your time jumping between stars, resolving pop-up dilemmas, and keeping the essential resources of your ship topped up. At first, this is an awkward juggling act: Out There doesn’t do enough to explain how to keep your vessel ship-shape, and topping up one resource often costs a significant amount of another – for example, landing on a grassy planet to replenish your oxygen will cost a significant amount of fuel, while refuelling from a gas giant will jeopardise your hull integrity.

With enough trial and error, you can grasp Out There’s unforgiving resource management, but it always feels too punishing. In true roguelike fashion, you’re never in total control of your fate, and a bad turn can leave your crew suffocated, murdered, or otherwise stranded.

Out There: Oceans Of Time. Credit: Mi-Clos Studio.

The real issue here is that Out There doesn’t feel like it should be punishing players as much as it does. It doesn’t feel like you have enough agency to reasonably avoid a messy fate, and runs can be ended far too frequently because of plain bad luck – primarily, spending fuel to visit several orbits just to find out that none of them have resources you need to survive.

Looking past the frustrating resource system, there’s a lot to love in Out There. There are few games that have managed to bring the cosmos to life so vividly, or with so much creativity. Out There‘s alien life forms are genuinely novel: one of the first you’ll meet is a spine stored in jelly, and it’s not long before you’re haggling for fuel with a banded sphere of light resembling an Old Testament angel. Trying to communicate with these aliens requires learning a new language over the course of your playthrough – until then, intergalactic diplomacy starts out as a high-stakes guessing game, but if you play your cards right your crew will slowly learn the right words and phrases to use. Along with the delightfully weird extra-terrestrial design, Out There does a smashing job of yanking Main Character Syndrome out of humanity’s hands.

The universe’s denizens are Out There‘s greatest draw, but the world they inhabit is nearly as impressive – on your interstellar trek you’ll visit vast black holes, blazing suns, and imposing stars. Developer Mi-Clos‘ art design ensures Out There is a visual treat, but even this area falls victim to the game’s overbearing resource management. It’s hard to stop and appreciate the beauty in Out There when you’re constantly having to think three steps ahead in order to avoid a frustrating death at the hands of a cold, unfeeling, galaxy. 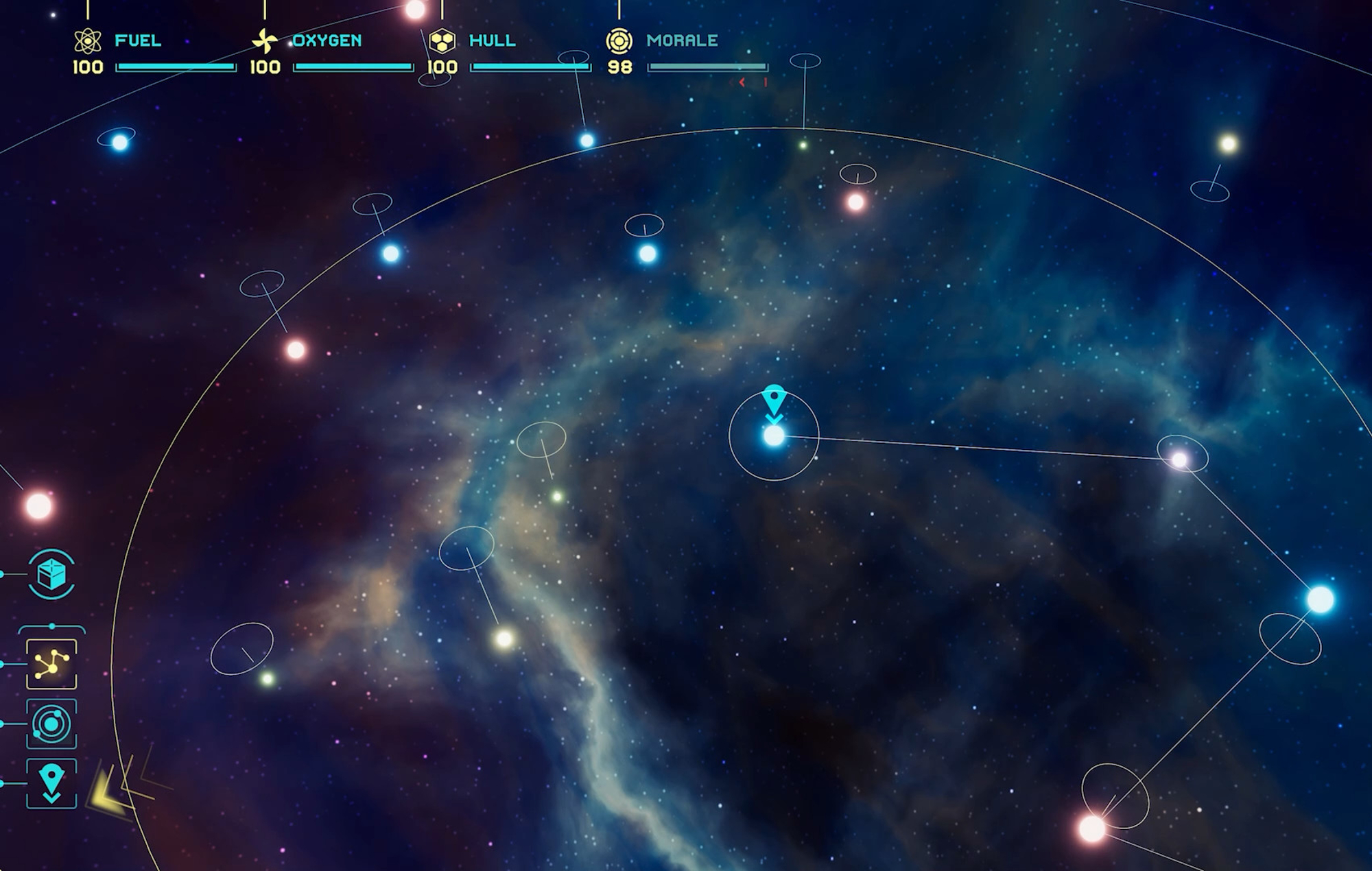 Out There: Oceans Of Time. Credit: Mi-Clos Studio.

Besides acting as galactic pit stops, each planet can be landed on to carry out an expedition. Expeditions are a party-based system where your crew sets out to see what there is to find on a planet – whether that be a village to trade with, minerals to mine, or loot to carry away. Expeditions are fun, and the dilemma pop-ups keep the journeys feel exciting, but – and maybe you’ll see a theme here – it costs a lot of fuel to land and take off, so it can be hard to offset any potential reward with the risk attached to landing.

Likewise, Out There‘s plot is brimming with captivating sci-fi drama, but it’s hard to engage with when you need to remain focused on juggling a million other mechanics at once. There’s no autosave feature, and saving manually is an obtuse in-game mechanic that’s hard to access. This was a painful lesson to learn during the review, as running out of fuel ended up causing 30 minutes of progress to be lost. Unlike games like Hades, where failing a run still serves to progress the plot, dying in Out There leaves you with nothing but an empty ship. 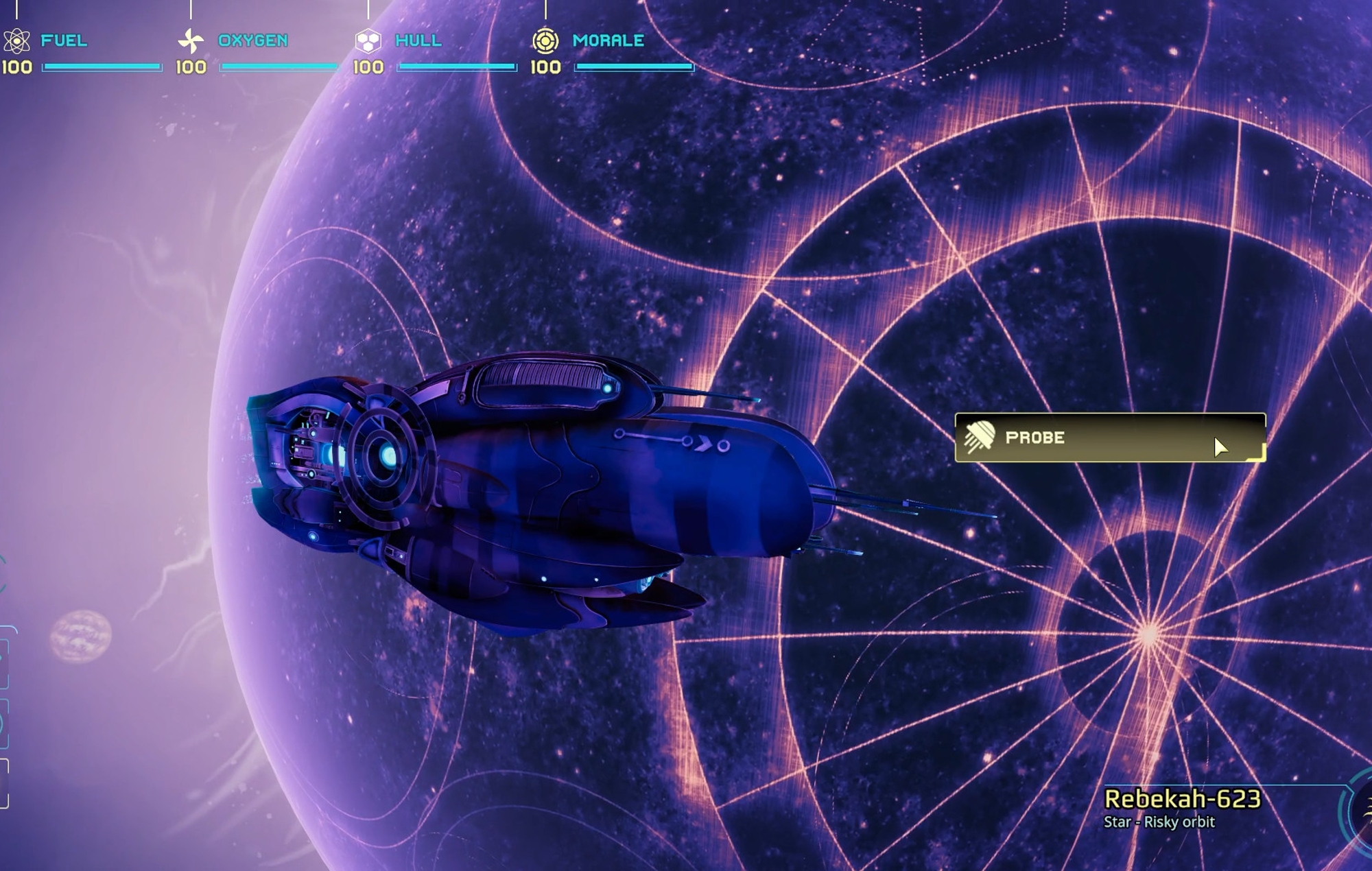 Out There: Oceans of Time. Credit: Mi-Clos.

Out There has a lot going for it, but many of its strengths are pulling in different directions. Cruising across the stars, looking for adventure and getting to see the galaxy’s phenomenal alien design is fantastic, but it’s hampered by something that’s either ambition or indecision: it’s unclear whether Out There wants to be a punishing roguelike or story-based adventure, and the result is a confused game that doesn’t pull off either.

Out There has the potential to be so much more than it is, but it’s not there just yet. A more thorough tutorial would take away most of Out There‘s frustrating trial and error, and better in-game tooltips would help decipher much of the game’s confusing UI. Additionally, an easier saving system would sidestep issues regarding Out There‘s roguelike elements stepping on the feet of an intriguing plot. These are all feasible changes, but for now, a ticket to this intergalactic cruise feels painfully economy class.

Out There: Oceans Of Time launches on May 26 for PC.

Out There: Oceans Of Time looks gorgeous and has a remarkably creative setting, but is too mechanically complex. An inadequate tutorial doesn’t do enough to prepare players for Out There‘s unforgiving resource management, and the game’s narrative elements feel directly at odds with frustrating roguelike features. If your heart is set on Out There‘s premise, you might be able to get into the game’s groove with some trial and error – otherwise, look elsewhere for your cosmic kicks.