Coparenting champs. Jason Sudeikis and Olivia Wilde have already settled into their new dynamic less than one year after their split, a source exclusively tells Us Weekly.

“She’s coparenting well with Jason,” the insider says of the 37-year-old Booksmart director.

Wilde and Sudeikis, 45, share son Otis, 7, and daughter Daisy, 4. The two never married, though they got engaged in 2013, two years after meeting. Us Weekly confirmed in November 2020 that the two called off their engagement, but the breakup happened weeks earlier.

“Olivia and Jason are better off as friends,” the source adds. “They’re doing their best at giving their kids a normal life. The kids bring them back together since they are and always will be their number one priority.”

The former couple’s split wasn’t brought on by any particular event, though their preferences for opposite coasts certainly added to the tension. 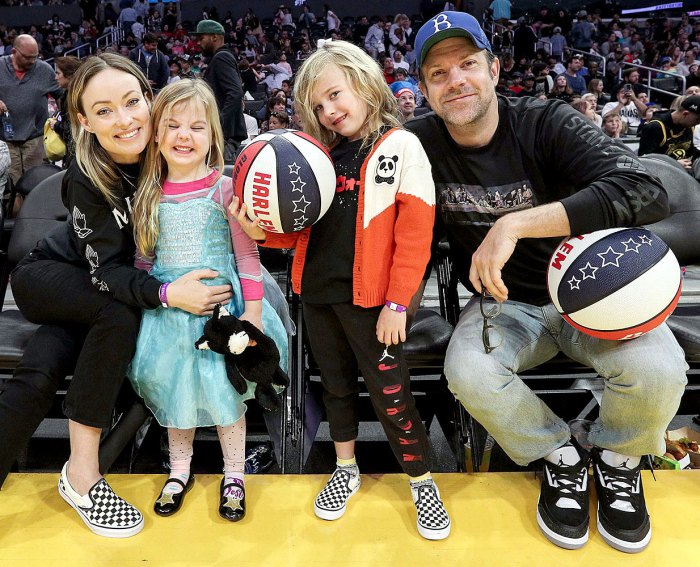 “Like most couples, they had disagreements,” a separate source told Us last year. “They were bicoastal, but Jason loved living in New York and Olivia, who was born in NYC, was leaning more toward Los Angeles. … They butted heads on many occasions and decided it was best to go their separate ways.”

As they move forward with coparenting, the actors are trying to get along for the sake of their two kids.

Wilde made headlines earlier this year when she started dating singer Harry Styles, who she directed in the upcoming film Don’t Worry Darling. Us confirmed in June that Sudeikis, meanwhile, sparked a romance with model Keeley Hazell — and the House alum wishes her ex nothing but the best.

“She’s happy for him if he’s happy with whomever he’s dating,” the insider explains.
The Ted Lasso star met his new girlfriend on the set of 2014’s Horrible Bosses 2. Like Wilde, Sudeikis is also dating a Brit who is about a decade younger than him. Hazell, 34, was spotted holding hands with her new man in New York City last month.

For her part, the O.C. alum is spending plenty of time in the U.K. to support her new beau, and she doesn’t mind that the world knows how happy she is with Styles, 27. The two were recently spotted soaking up the sun on a yacht in Monte Argentario, Italy. They had no problem snuggling and smooching in between dips in the water.

“Their chemistry is off the charts and the thing that works for them is that they don’t hide their relationship from the public,” the first source tells Us. “They don’t care who’s around watching them pack on the PDA.”