An unexpected controversy. Olivia Culpo recently found herself in hot water at the airport — because of her outfit.

The former Miss Universe, 29, was on her way to Cabo San Lucas, Mexico, with her boyfriend, Christian McCaffrey, and her sister Aurora Culpo on Thursday, January 13, when she was asked to change clothes. 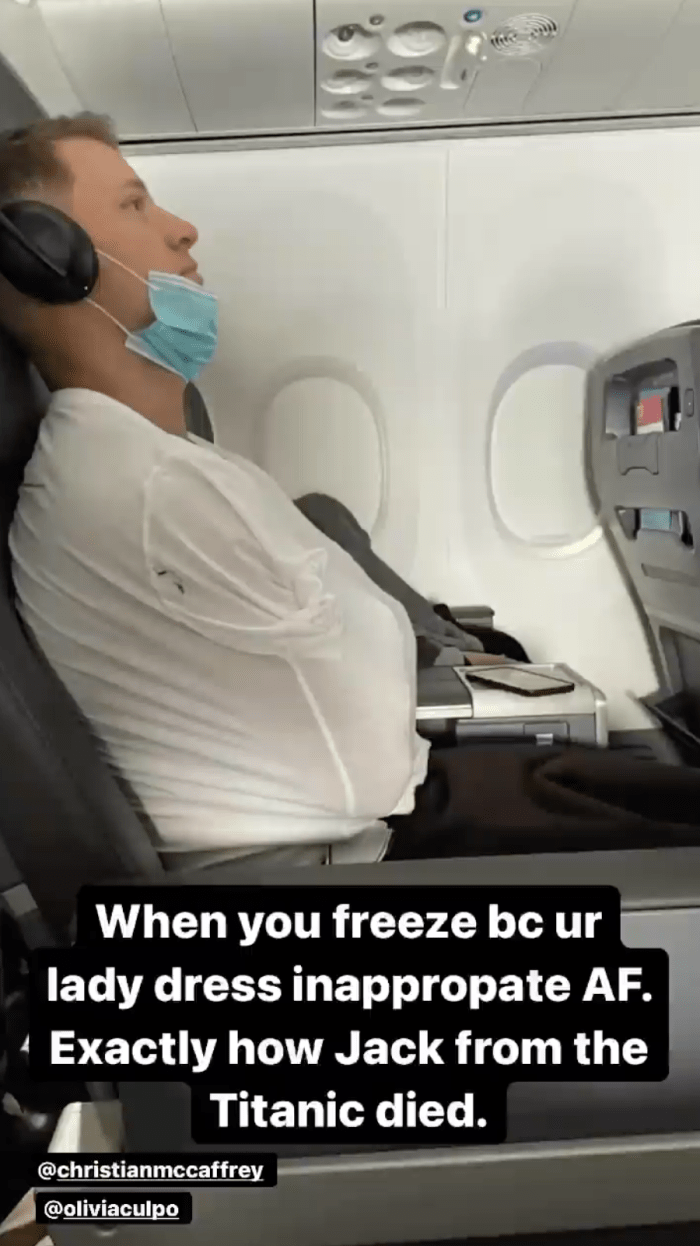 “Look at her outfit. She looks cute. She looks appropriate,” Aurora said in an Instagram Story she shared on Thursday. “They call her up to the desk and tell her that she needs to put a blouse on, otherwise she can’t get on the plane. Tell me is that not so f–ked up.”

The I Feel Pretty actress was wearing a black sports bra and bike shorts set with a long black cardigan. To comply with the airline’s demand, she borrowed a gray hoodie from her beau, 25.

After the group successfully boarded the flight, Aurora shared a photo of the NFL player sitting with his arms tucked inside his T-shirt. “When you freeze bc your lady dress inappropriate AF,” she joked in a caption. “Exactly how Jack from the Titanic died.”

Olivia, for her part, remained calm, befriending another woman at the gate who was dressed in a similar outfit that revealed part of her midriff. “Leave it to Aurora to cause a scene,” she joked via Instagram, reposting her sister’s video. “Hide me.”

When the group touched down in Mexico, however, Aurora changed her tune about her sister’s clothing because of a unique sleepwear choice. The former Miss USA wore a ruffled miniskirt and matching crop top for bed rather than a simple nightshirt or pajama set.

“Just want to say that I am officially on American Airlines’ side and I will no longer support my sister in any of her wardrobe endeavors,” Aurora said in another Instagram Story. “Because she has proven to me to be completely incapable of putting together an outfit that is appropriate for any situation.”

The siblings were joined on the trip by their other sister, Sophia Culpo, and her boyfriend, Braxton Berrios. In 2020, the Culpo women teamed up to design the Culpos x INC clothing collection for Macy’s — their first collaboration as a family.

When they were growing up, however, they often shared clothes. “For my prom I never bought anything. My mom always made me wear my older sister’s stuff,” Olivia told Us Weekly in November 2020. “I always just had to wear what Aurora wore.”

The sharing worked out in Sophia’s favor later on when she got to borrow Olivia’s Miss Universe dress for her own prom. “So extra!” the Venus as a Boy star joked to Us. “The youngest always gets so spoiled.”