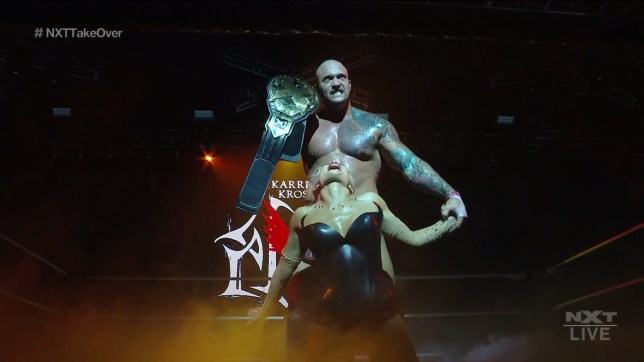 The Prince had held the title on WWE’s black and gold brand since September last year, but his vicious opponent reclaimed something he never really lost after being forced to relinquish the prize due to injury.

Balor put up a spirited effort in a brutal semi-main event, but in the end it was Kross who emerged victorious as he pounded his championship rival to take his spot at the top of the mountain.

As physical as the title bout was, the main event which followed it dialled that up a notch (understatement of the century) as Undisputed Era rivals Kyle O’Reilly and Adam Cole clashed in an Unsanctioned Match.

From steel chairs to a chain, these two played up every possible part of their story to paint an all-time masterpiece on the canvas with so many moments leaving fans wincing for their safety.

The imagine of both men smashing through the NXT entrance ramp will live long in the memory, although it feels like bringing the match down to one or two instances is doing it a huge disservice.

In the end, Kyle O’Reilly earned a huge win over his friend turned enemy – and you’ve got to feel for anyone trying to top that display of emotion and talent over the remainder of WrestleMania Week.

Elsewhere, the opening Ladder Match to determine the undisputed Cruiserweight Champion was a hard hitting, high risk affair with both Jordan Devlin and eventual winner Santos Escobar putting everything on the line.

The standout moment came when the former hit a picture perfect moonsault off the top of a ladder, while the ending came after he was headbutted off and send crashing through another.

The NXT Women’s Tag Team Champions built some momentum in an energetic match with a scary bump for Shotzi Blackheart.

Thankfully, Shotzi seemed ok and was able secure the win for herself and Ember Moon as they overcame the challenge from The Way’s Indi Hartwell and Candice LaRae.

Up next, Johnny Gargano successfully defended the North American Title against Bronson Reed, who had won the Gauntlet Eliminator on Wednesday night.

The pair put on a really great match and it seemed like we might see a switch, but the champion was able to emerge victorious.

It was another fantastic night for NXT after Wednesday’s edition of TakeOver, which saw Raquel Gonzalez beat Io Shirai for the Women’s Title, while MSK claimed the vacant NXT Tag Team Championships in a Triple Threat with Grizzled Young Veterans and Legado Del Fantasma.

WALTER continued his reign of dominance as he retained the NXT United Kingdom Title in a hard hitting match with Tommaso Ciampa, and Pete Dunne showed off his technical prowess in a beautiful opener against KUSHIDA.