Always there for her! Nikki Bella opened up about why she chose to thank John Cena during her March Hall of Fame speech, revealing that her ex-fiancé would always hold a place in her heart.

“I didn’t think anything about it because when you’re in those moments at the Hall of Fame, you really look at your career and you’re like, ‘Who was there, who helped me along the way?’” the former wrestler, 37, told Entertainment Tonight. “So much of the time people will talk about themselves, and for me, I look at my career and I know that wasn’t just because of me. It was Brie [Bella], it was the Bella army, it was the producers, all the people that believed in me, and John was a big part of that.”

She went on to explain that Cena, 44, always encouraged her to be the best version of herself.

Nikki Bella and John Cena show off the engagement ring after she accepted his marriage proposal during WrestleMania 33 on April 2, 2017 in Orlando, Florida.
AP/Shutterstock

“He really helped me be that fearless side and showed me a part of that world that I never saw before,” she said. “I think just because you have breakups or whatever it may be, doesn’t mean you can’t thank those people and just truly be so grateful for the help that they had.”

The Blockers actor and the Dancing With the Stars alum got engaged during SummerSlam in 2017 after five years of dating. In 2018, Us Weekly broke the news that they had ended their engagement.

“After I called off the engagement, we tried to work on our relationship to get back to where it was in order to move forward with our wedding,” the Total Divas alum told Us in July 2018. “After much time and soul-searching alone, and together, we have decided to officially part ways. I had a beautiful and loving six-year relationship with a wonderful man. I have the utmost respect for John, but I know this is what’s best for me.” 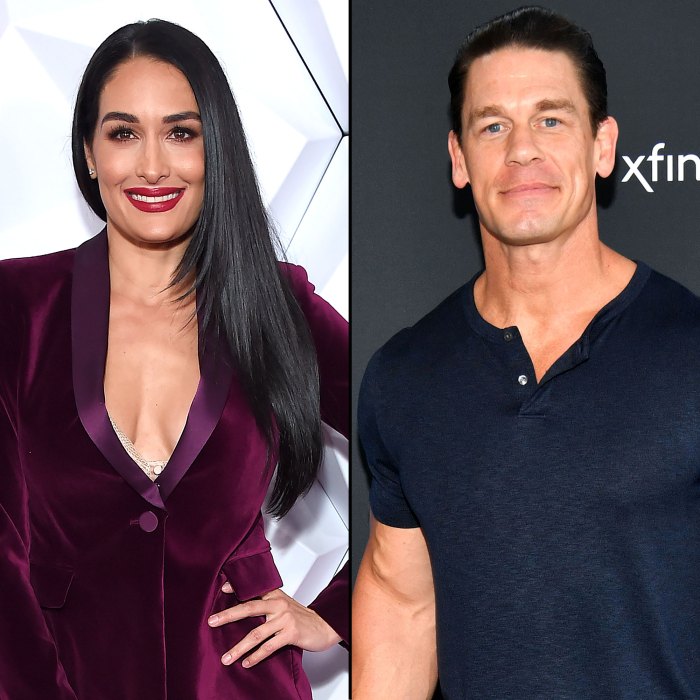 Both athletes have since moved on. Nikki began dating Artem Chigvintsev, her former DWTS partner, in 2019. The duo got engaged in November of that year and welcomed their first child, son Matteo, in July 2020. Cena, for his part, married Shay Shariatzadeh in October 2020.

Following Matteo’s birth, the Suicide Squad star reached out to the Birdiebee cofounder and her sister, who welcomed her second child, Buddy, with husband Bryan Danielson one day after Nikki gave birth.

“John and I will be tied forever. I get that, like, we had a public relationship on a reality show for six years,” she shared with Us in November 2020. “All I’ve ever wanted was for him to be happy. So, it makes me happy when I see that and, like, him kicking butt in the movie world and all that stuff. I love that! So with the baby, he reached out to Brie and I both.”