15 new areas featured in Warzone’s new map, Caldera, have been revealed ahead of its release date.

The new map, which is set to launch on December 8 for owners of Call of Duty: Vanguard and the following day on December 9 for Warzone players, will take combatants to the Pacific island of Caldera, a sprawling map set to replace the eastern European Verdansk, which has served as Warzone‘s main location since 2020. The list of new locations has also come with a description of each of them provided by the Warzone Team.

Composed of a sprawling shipyard and an advance base, Caldera’s northwest area provides a mix of interior and exterior combat opportunities, as well as unusual tactical positions such as the deep drydock basins. Farther inland is a cluster of large buildings — a command center, admin structure, barracks compound, training course, and firing range — with beaches and a small radar array found east of the main Arsenal. 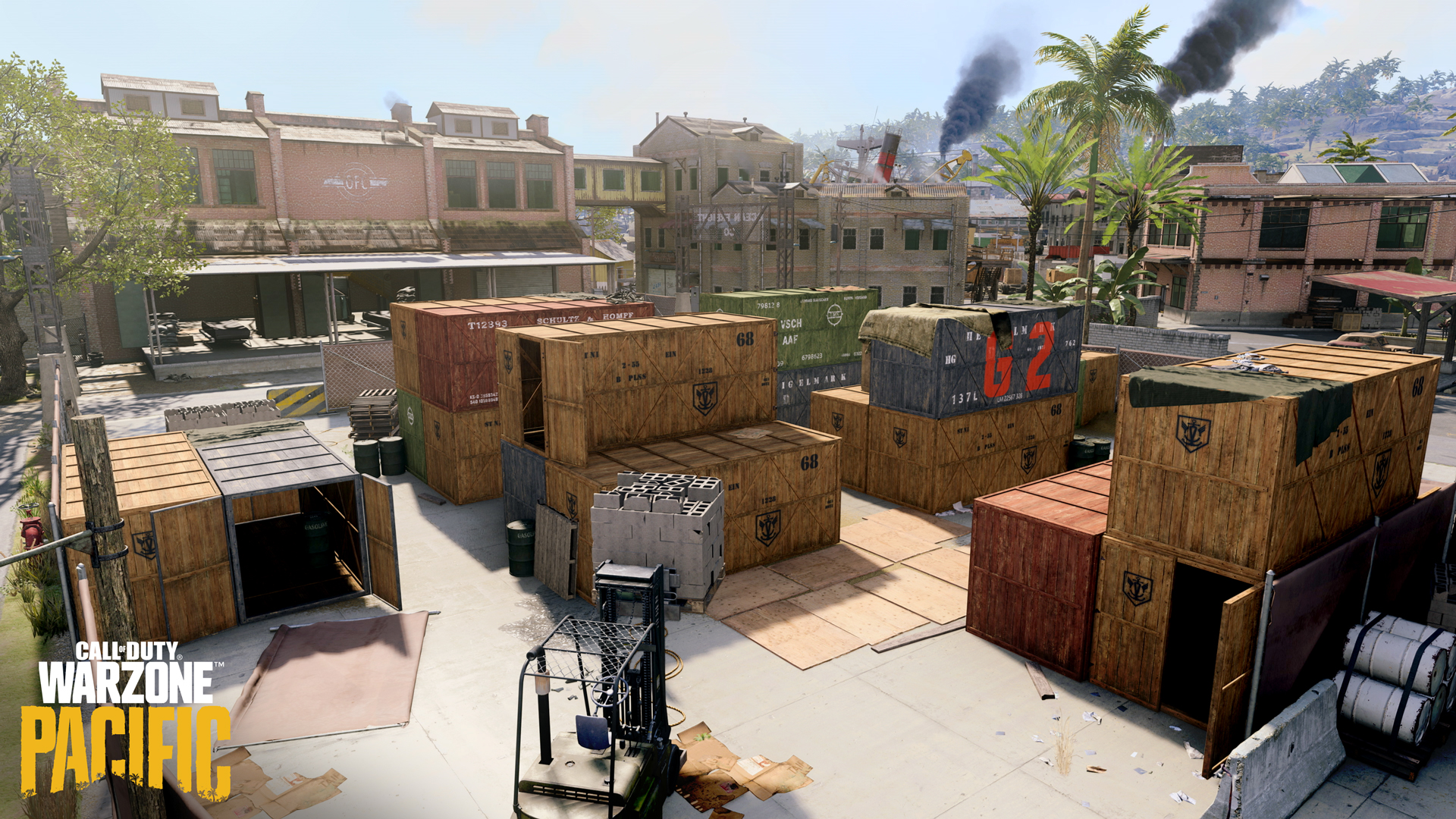 Once managed by the Ocean Freight Company, this large-scale industrial dock complex features the rusting superstructures of five massive cranes, a huge ship hangar, the company’s long-abandoned headquarters, and an entire shipment yard (emphasis on the word shipment). The area also bridges several nearby points of interest: fuel tanks, phosphate containers, and refineries from the Mines and Peak, a military base with Quonset barracks near the Arsenal, and an entire fishing village of bamboo residences near the Runway’s untouched jungles.

While the main airfield and Caldera Terminal airstrip to the southwest see most of the aircrafts’ takeoffs and landings, there’s a secondary runway in the northeastern corner of Caldera for those stationed at the Beachhead or Arsenal–Docks complex. With the area half hidden in the jungle, you’ll navigate past single dwellings and ruined farmsteads, and clamber across rugged buttress rocks to reach this coastal promontory, complete with a runway of dirt. Farther into the jungle is a military command center with its own share of secrets. 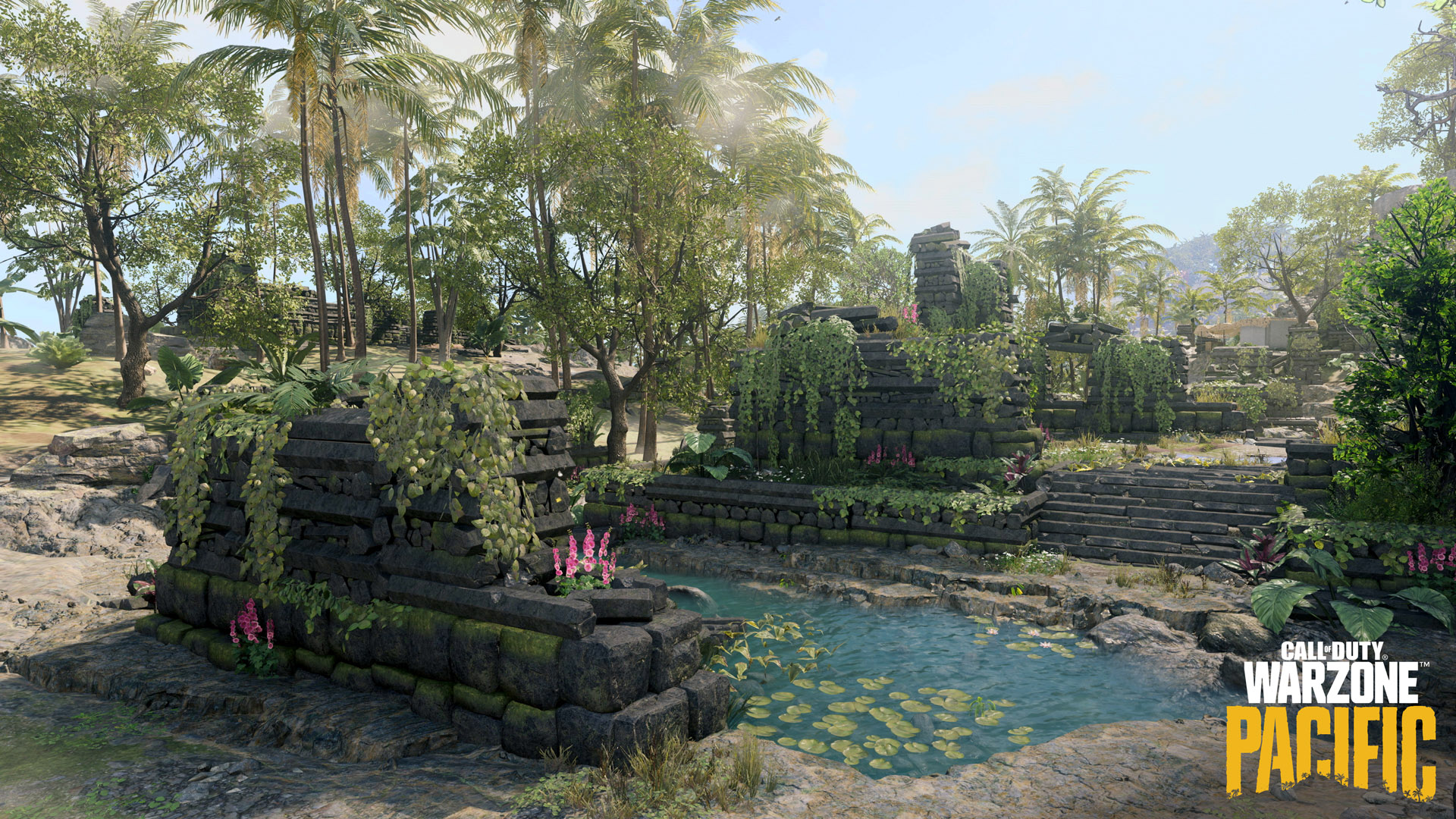 Nestled north of the river village and west of the expansive mine works, this untouched archaeological site contains the remains of structures, seemingly created in a megalithic style around or before the 12th century, built with baluster joints that mimic natural volcanic geological columns. Find these close to a rapidly flowing stream, and venture east through a jungle gully to discover larger ruins deeper within the hillside forests. Other surprises include a series of tiered pools and verdant hot springs. 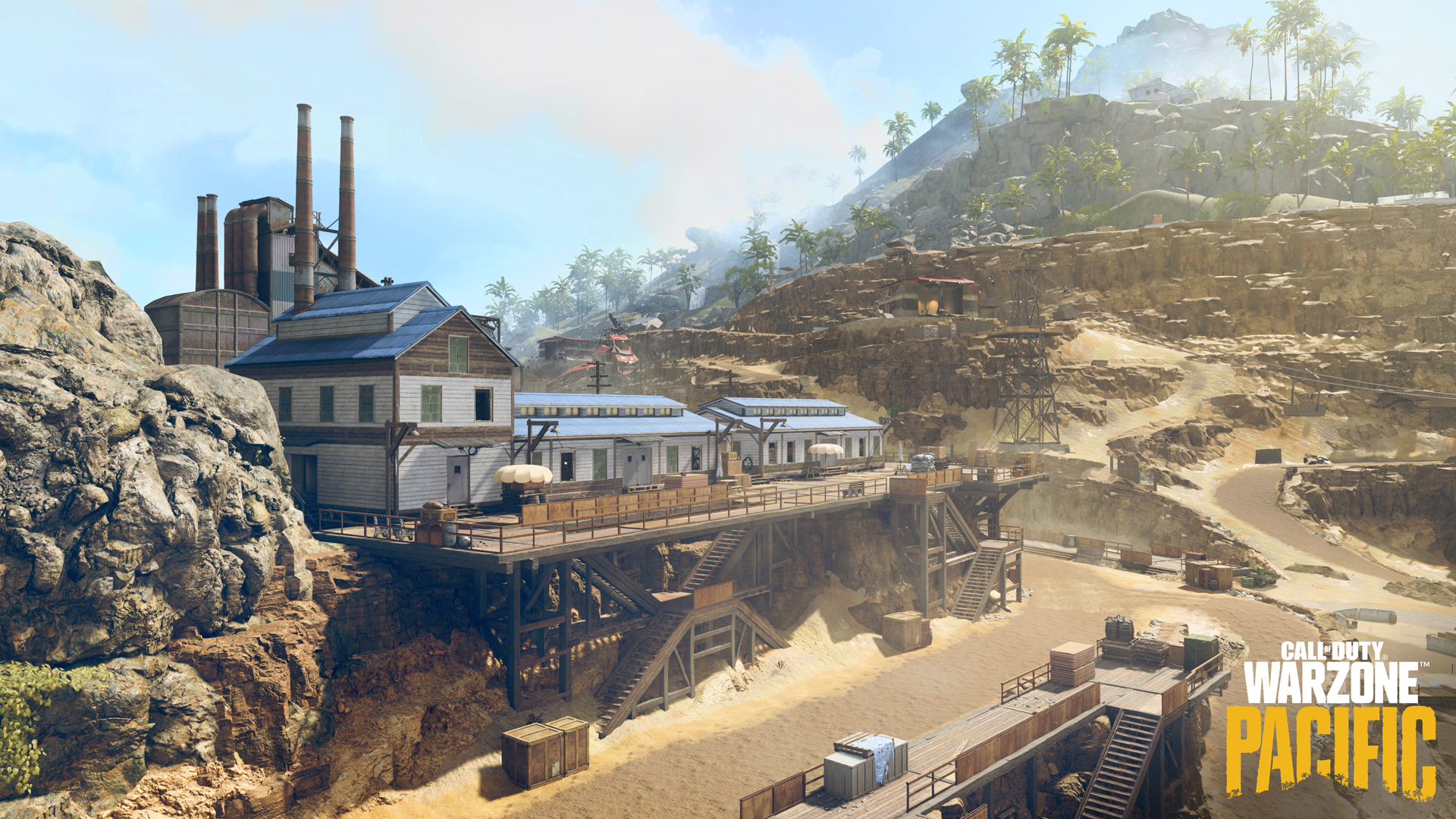 A massive mining operation in the excavation, refining, and transportation of phosphate gives way to snaking switchbacks, giant grinding machines, mine gondolas stretching from the main gorge to the docks, smaller factories, a rail line, and steep embankments, which all offer a mix of engagement types. Operators can also investigate a large factory compound, look for older mine workings, and stumble across a [[REDACTED]] with its own [[REDACTED]], or explore the outer reaches containing secondary workings, run-off pools, conveyor belt structures, unloading bays, containment pools, and even a remote gas station and grocery store. 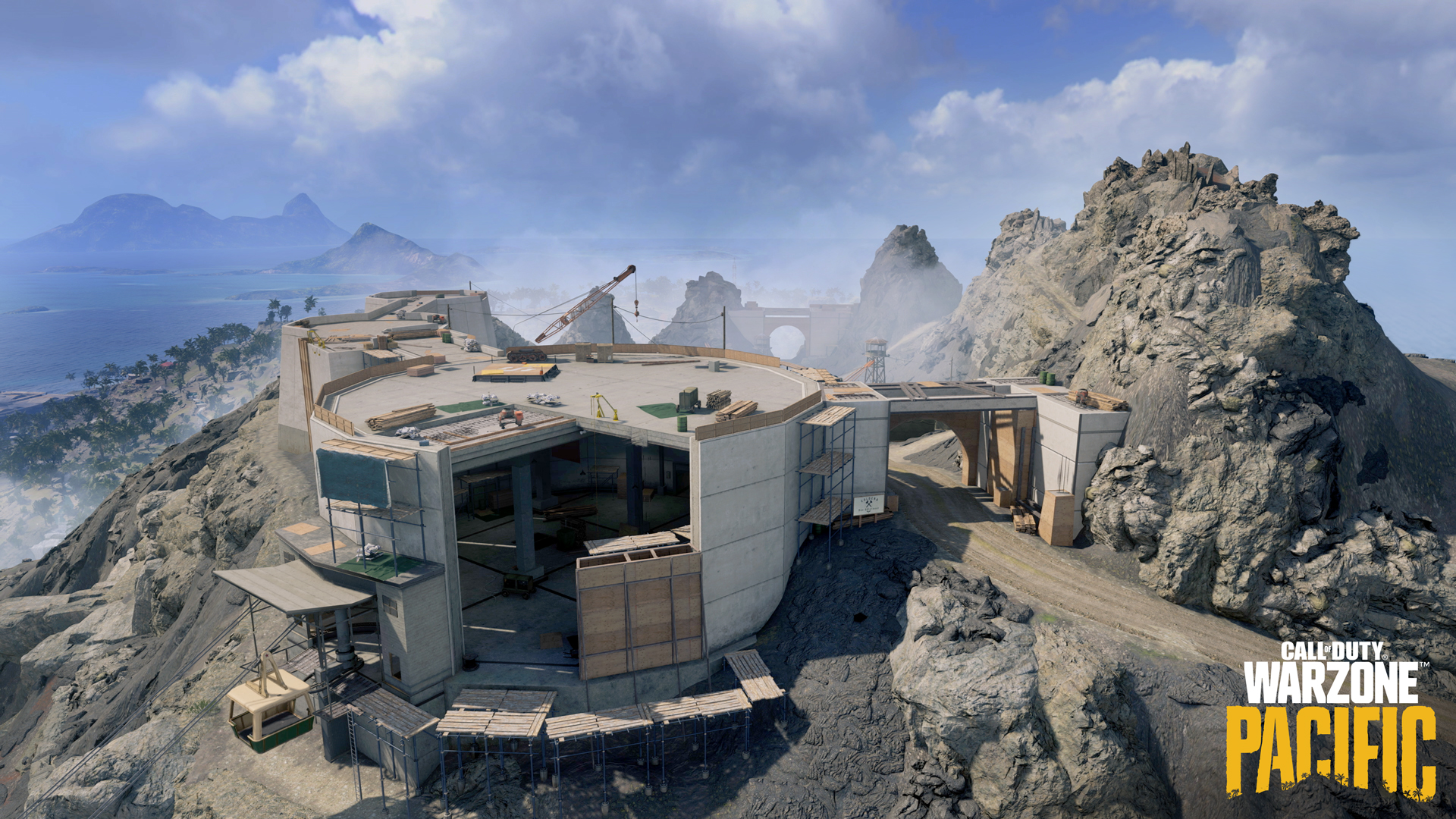 This is the high ground. Dominating the center of the map is a colossal peak of a dormant volcano, after which the entire island is named. The height advantage you receive for landing atop the caldera throat and Axis military battery installation under construction here is counterbalanced by the exposed nature of the environment. Rock outcrops can offer respite should the area become a “hot drop,” as can the main gondola station that shuttles from the Peak toward the Runway, or the magma chamber and what was built during its slumber… 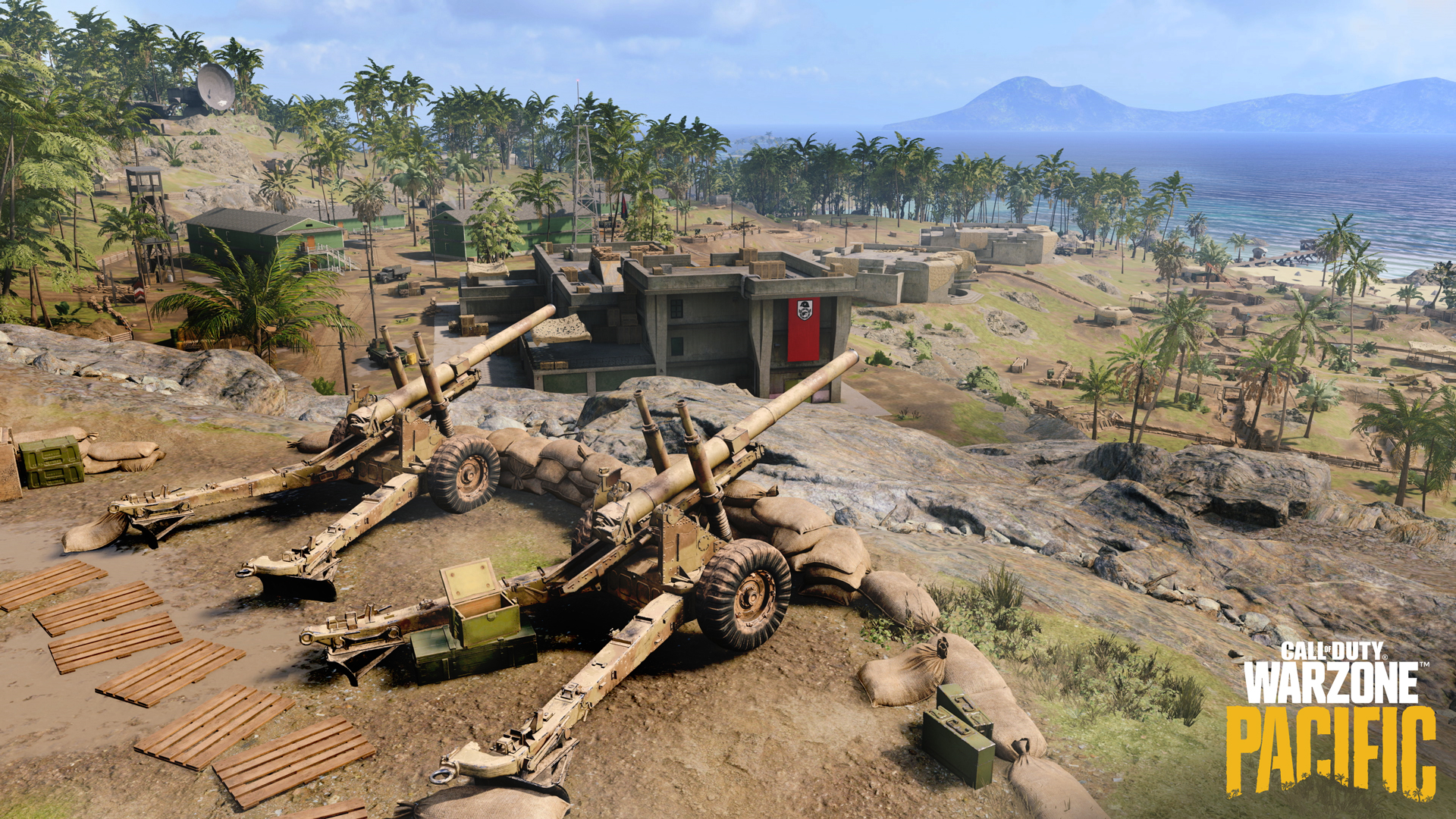 Cut into dunes on the island’s northwest coast, a sprawling network of trench defenses sits below the communications center, radar array, barracks, and large-scale military compound — all built in anticipation of a beachfront storming. Farther south are battery emplacements juxtaposed against a village of bamboo homes sitting on either side of a river gorge, with plenty of main roads, dirt tracks, footpaths, goat trails, and jungle overgrowth to traverse in all directions. 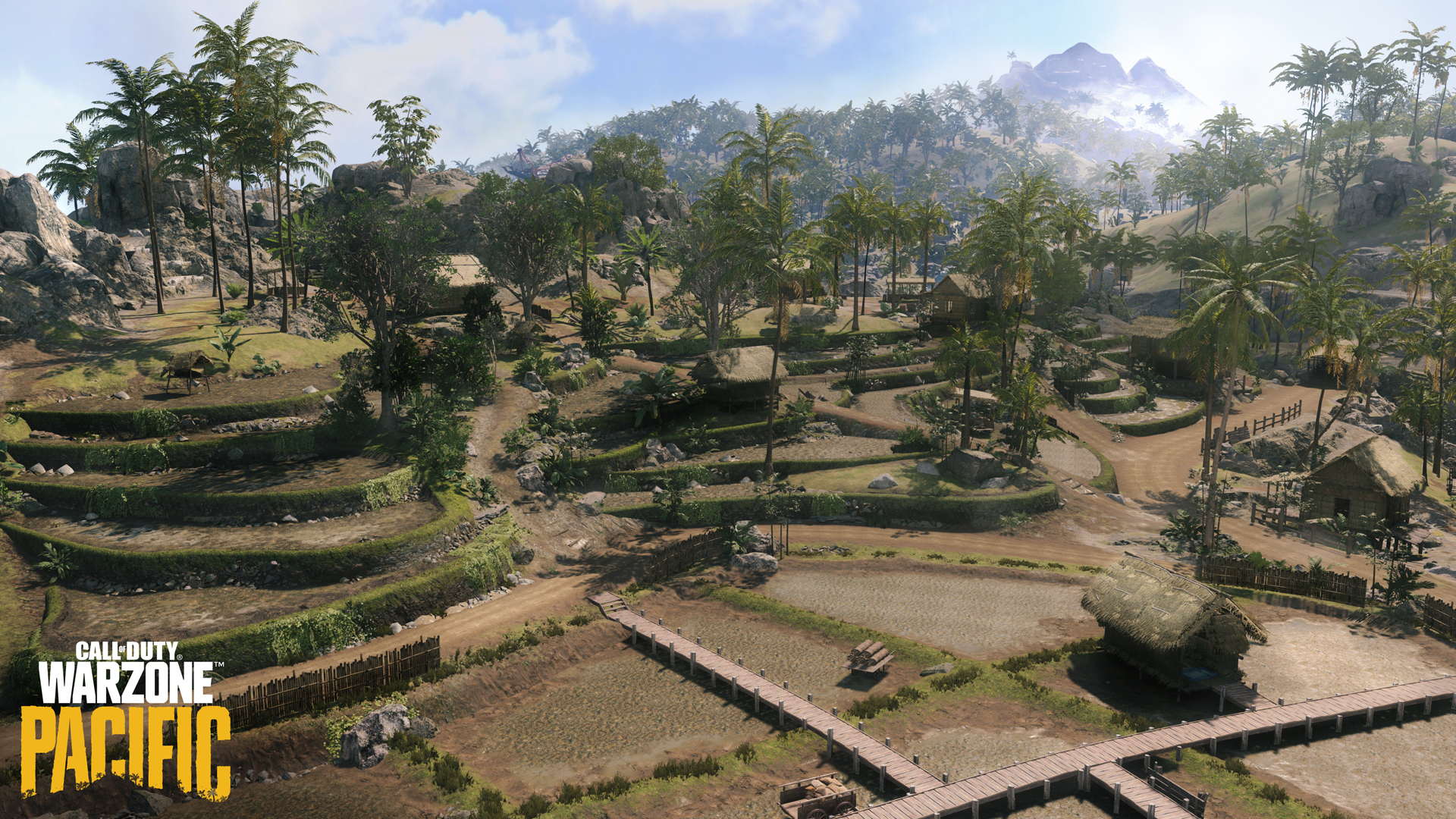 Despite the remains of a cargo ship and recent gun emplacements tactically positioned on foothills west of the Peak, a small village’s bamboo huts, footbridges, paddy fields, and craggy slopes remain untouched and are ready to be explored. Farther south and east is the main tarmac thoroughfare that circumnavigates the entire Caldera. Either side of it is wilderness, interspersed by light industrial compounds, more modern structures from the 1930s, and suburban dwellings cut into the hillside with anti-aircraft emplacements there to deal with traffic from the adjacent Airfield. 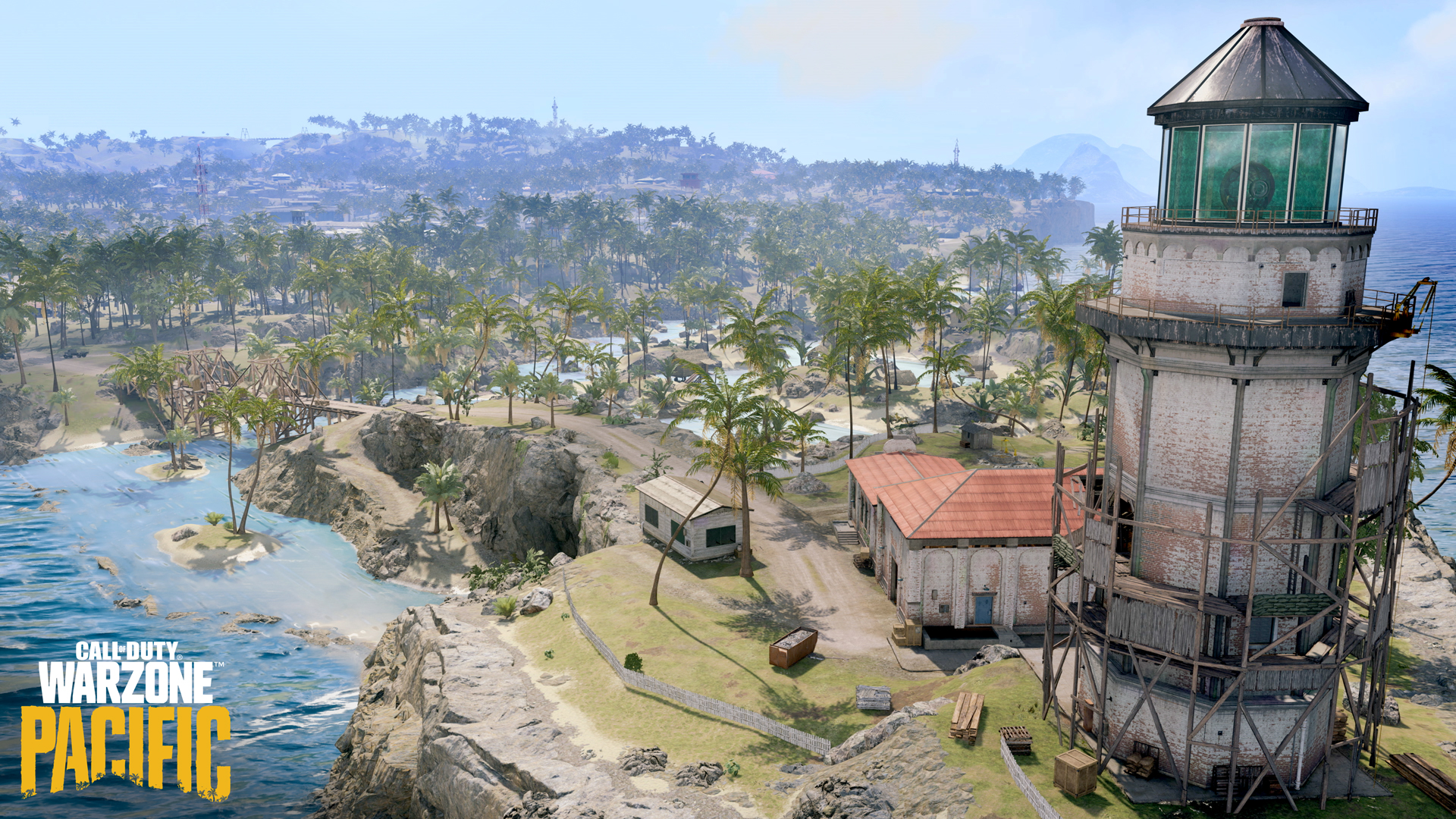 An old lighthouse proudly overlooks a shallow bay that holds generation-spanning bamboo huts alongside a quaint coastal community with more-recently constructed homes. Traverse the lagoon to uncover its secrets, including what remains of Captain Butcher’s plane… 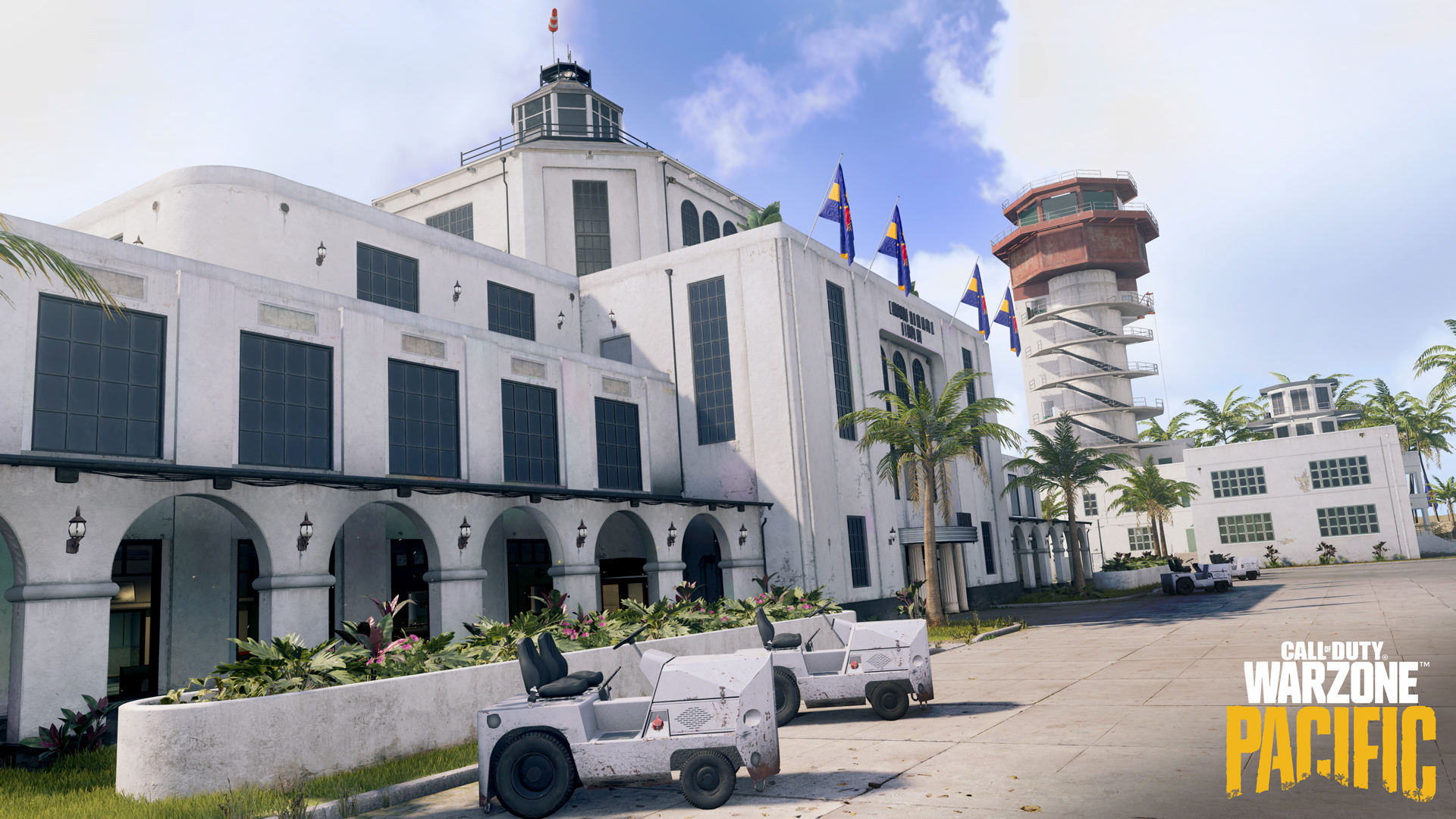 The island’s primary airfield has no shortage of aircraft or buildings to explore, including smaller support structures for personnel and a control tower with more than one point of entry. Those wanting cover from the exposed tarmac and gaping entrances to each of its hangars may want to head toward a section of buildings near the Village, or to the southern coastal boarder where Allied military forces set up their base of operations. 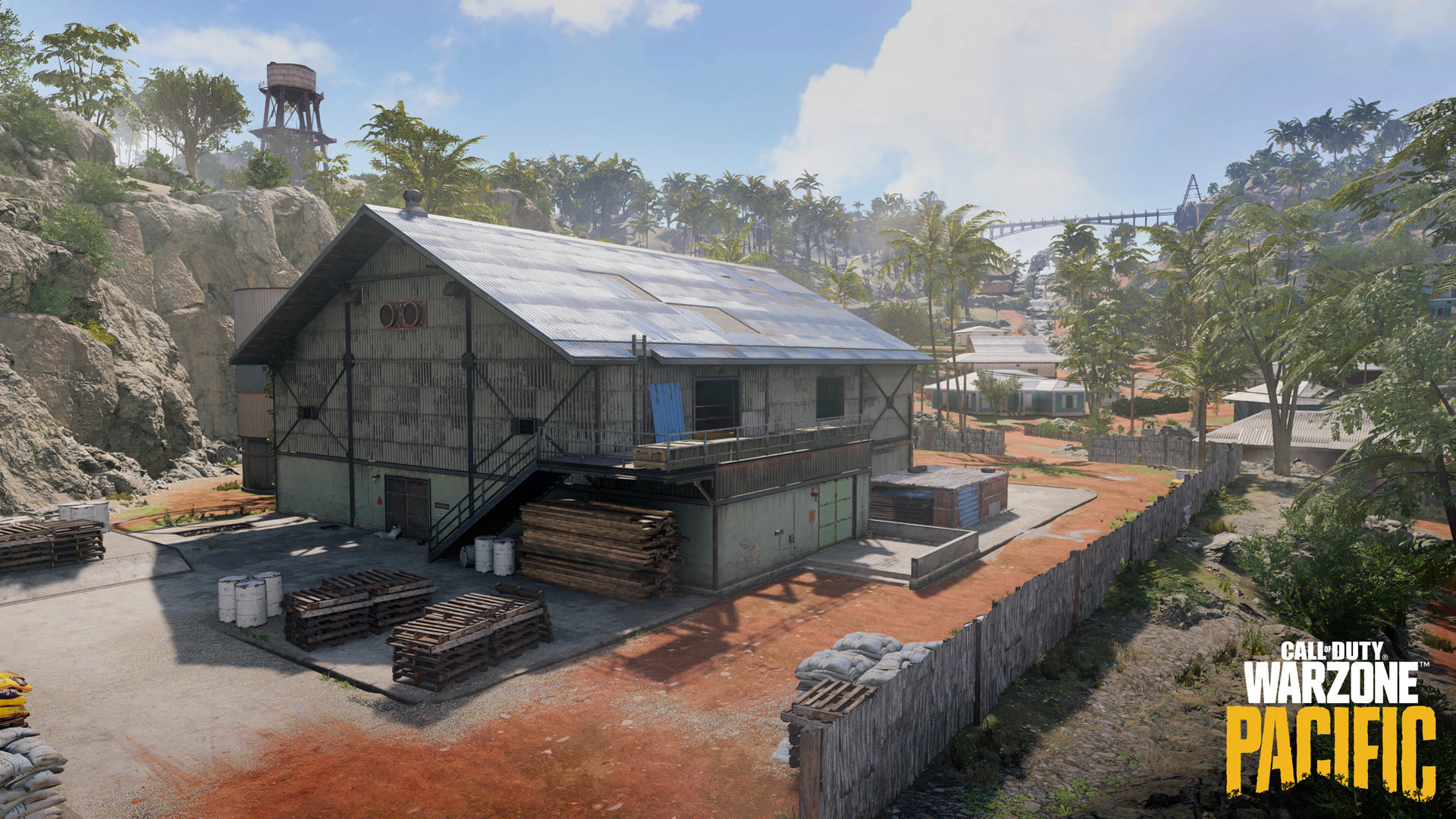 By far the largest main point of interest on Caldera are the fertile agricultural fields just south of the volcano. As well as the numerous small farms, there’s light industrial depots containing agricultural machinery and storage, an administration center, water tower, stables, and other landmarks to pinpoint when you’re navigating the undulating and lush landscape of these parts. From numerous remote farm buildings, silos, and lakes to logging camps, a military outpost and communications tower, and rocky crags, these are plenty of combat opportunities and routes to all of Caldera’s southern zones. 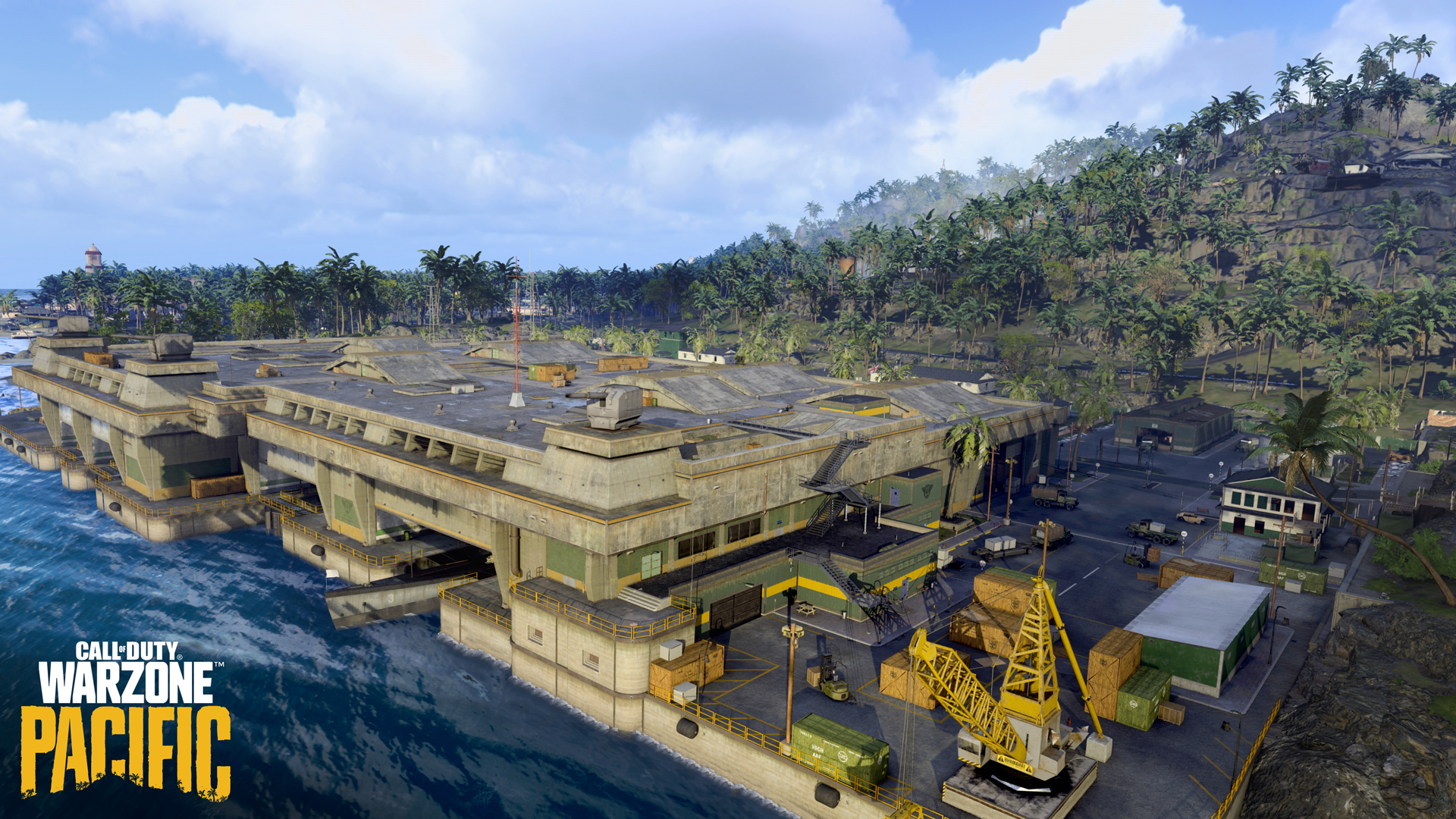 Cut into a natural cove along the eastern coast of Caldera is the island’s largest military installation: the ominous Sub Pen nicknamed the Shark’s Lair. Built by Axis forces to house its naval U-boats, including one still moored here, the lair is a massive interior space to explore and hold. Outside of it, several outbuildings and a bunker compound, complete with a complex underground tunnel system, can be explored to gather necessary supplies or contracts. 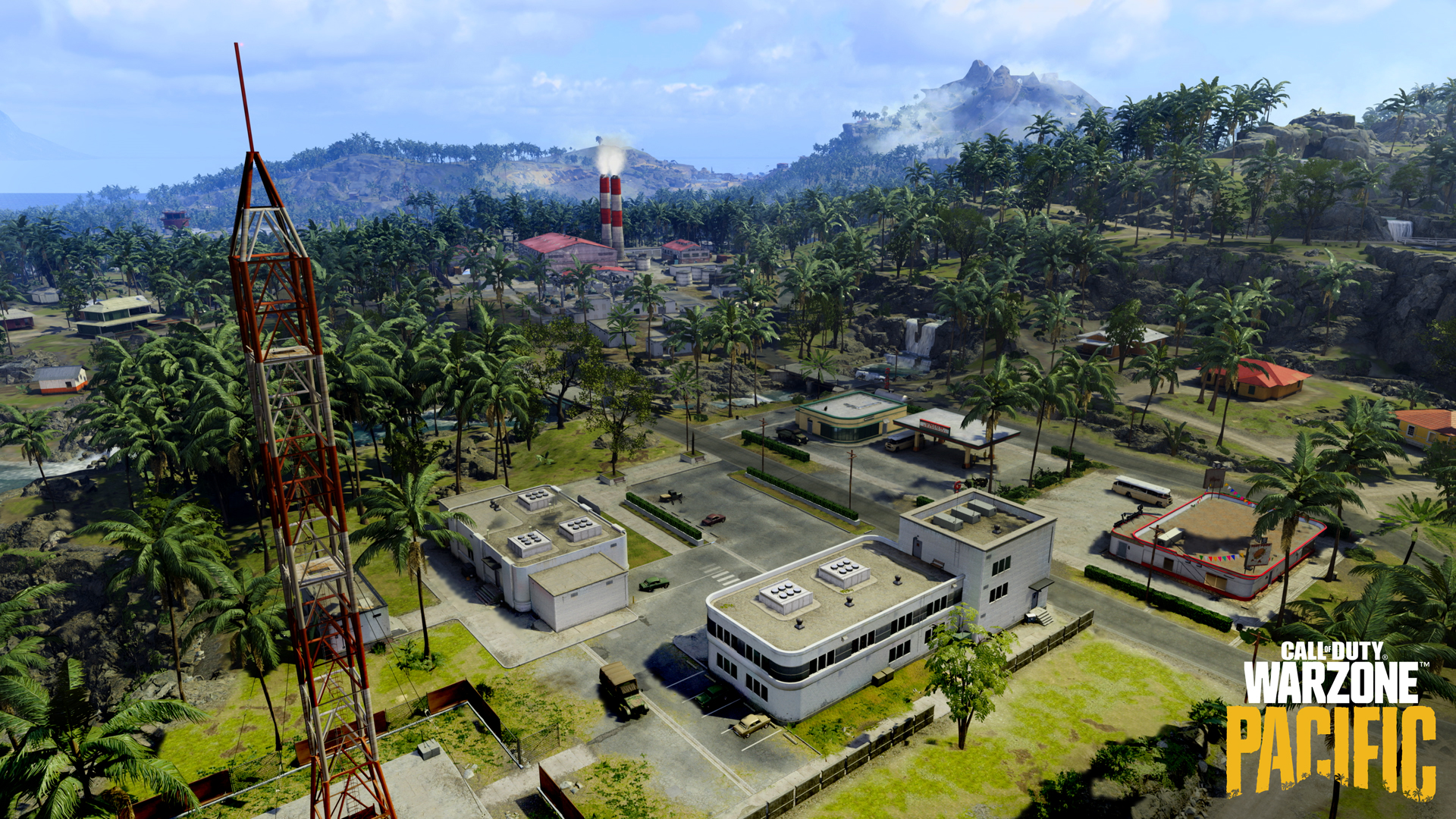 A medium-sized power plant with a pair of smokestacks dominates the upper flood plain just south of the Airfield, sticking out from the lush greenery, stepped waterfalls, and ancient ruins found elsewhere in the area. Venture farther south from the plant to find a large radio antenna and a civilian radio station. 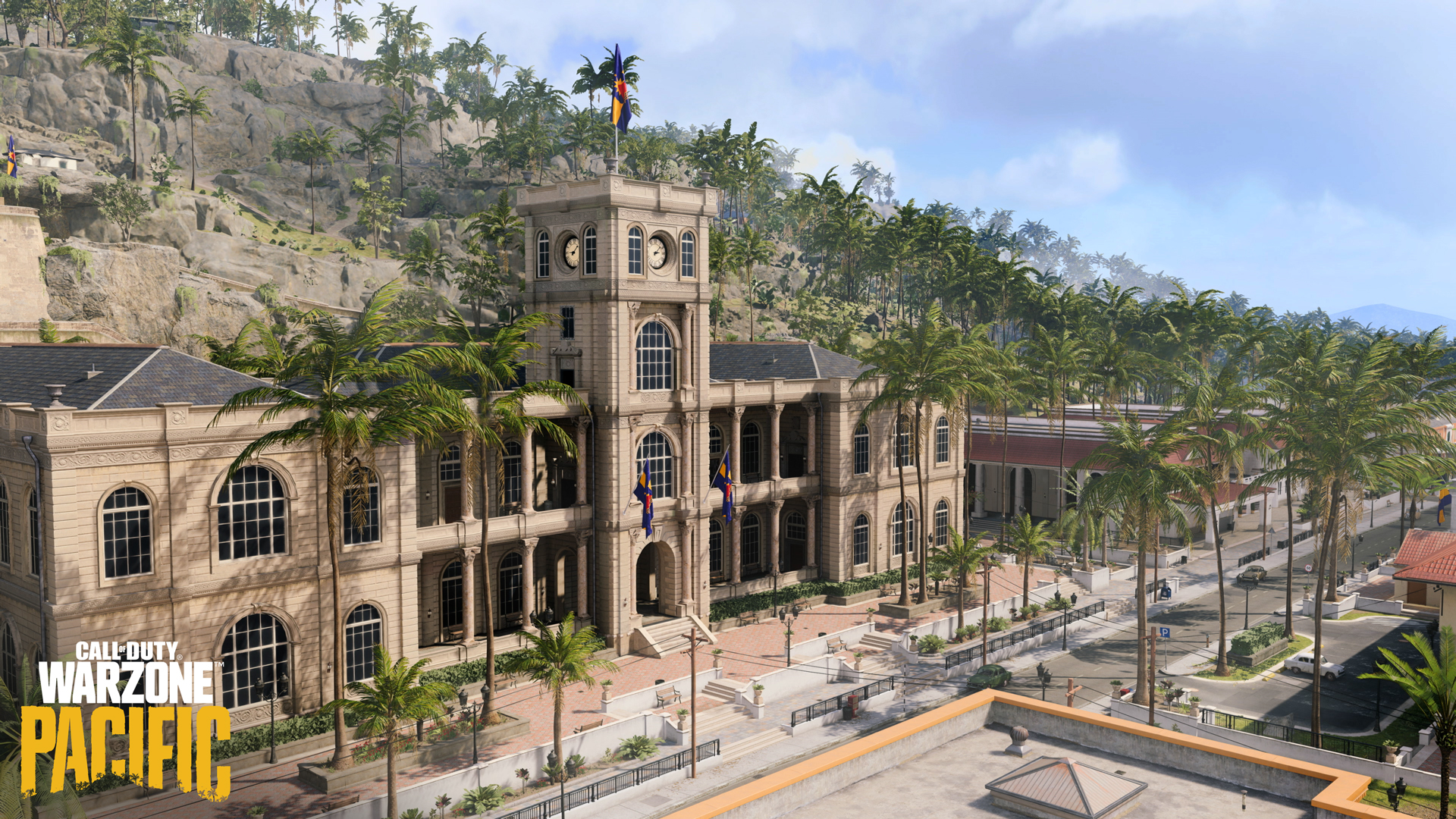 Set into a huge natural basin along the southern shores of the island, Caldera’s main city offers a variety of historical structures to take control of, including the Royal Theater, main Capitol Building, and art deco structures like the Fire Station and Police Station set on either side of a working tramway system. Along the western edge of the capital, a hillside suburbia and lighthouse offer space and height compared to the bustling downtown on Main Street, while coastal developments south of the city offer a luxurious beachfront yacht club and bar where a squad could be prematurely celebrating their Battle Royale victory. 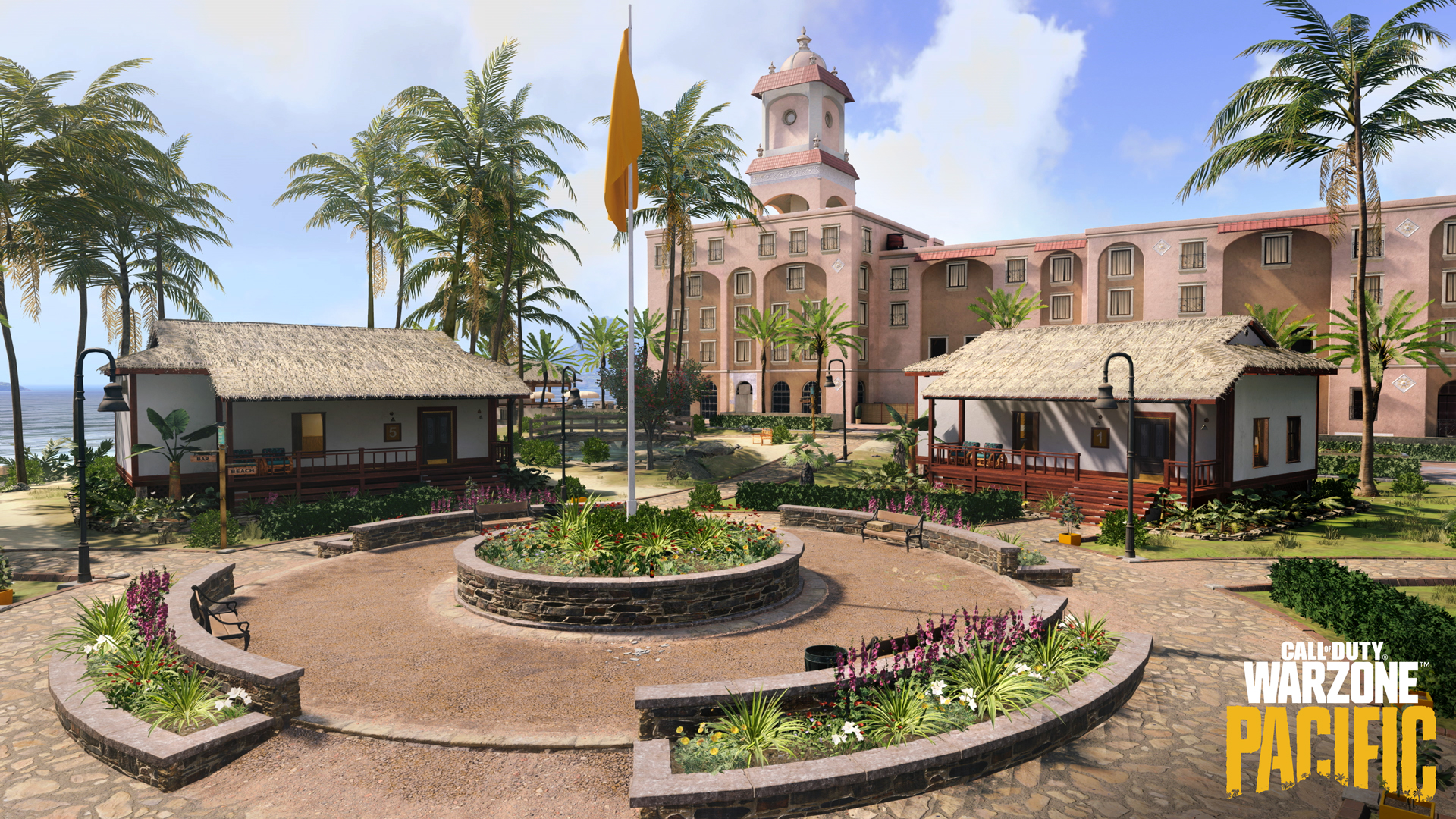 Pristine sandy beaches, great surfing, clusters of cabana huts, and a stately main hotel structure were on offer to the well-heeled traveller at the Royal Cabana Resort. Operators dropping into Caldera should expect to see the deserted remains of this resort, with a main thoroughfare offering quick access by vehicle. There is also a small square and clock tower, bus station, and the hotel entrance itself. The grounds of the resort are large and lush, with shallow pools, ferns, and palm trees to thoroughly explore.

In other news, Rockstar Games‘ troubled Grand Theft Auto: The Trilogy – The Definitive Edition (GTA Trilogy) has had its physical release delayed.