The family and collaborators of Frightened Rabbit frontman Scott Hutchison have spoken to NME about new book The Work – collecting the late singer’s lyrics and artwork together for the first time.

Hutchison, who died by suicide in 2018, is celebrated in the new book, gathering the band’s complete lyrics (including B-sides and rarities) with handwritten excerpts by Scott, alongside his illustrations – many of which have never been seen before. Released this week, the book has been described by the surviving band members as “a tribute to Scott’s unbridled creativity”.

Speaking to NME, Hutchison’s brother and Frightened Rabbit drummer Grant explained how The Work invites people into the world of Scott’s imagination.

“A lot of people keep saying that this is his story or his journey. There are elements of that, but I see it as a physical space – a house or a building that you can go in different rooms at any point and see different stuff,” said Grant.

“The physicality of it means that people have something tactile that you can be a part of. For us as a band, the real connection happened in the room at a live show. Yes, the records were what Scott poured all of his creativity into, but it really wasn’t until we got everyone in a room and you could put your arm around someone else, kiss the person you’re with or shout at the top of your lungs. Those are the moments that people will remember. This book gives those songs that same physicality and sense of space.”

The Work’s creative concept came from renowned album designer Dave Thomas, who worked with Frightened Rabbit across their career. Thomas told NME how the idea of a lyric book was something that he’d talked about with Scott many times throughout the years.

“Scott did a lot of his own illustrations to go alongside his lyrics so he wanted to marry the two things together,” said Thomas. “It actually started around [acclaimed 2008 album] ‘The Midnight Organ Fight’ anniversary, and he’d worked on three or four lyrics that were fully illustrated.”

He continued: “Because we’d had quite a few conversations over a long period of time, it was last year when the band and I started talking. Much like ‘Tiny Changes’ [The ‘Midnight Organ Fight’ tribute album], this was something that Scott was already involved in and talking about, so we felt it was something that we should pursue.”

Grant agreed: “Knowing that it was something that Scott had already discussed made that decision very easy. There have been a lot of things that have come up with the band over the last three years that we’ve had to make a decision on with that feeling of, ‘Is this the right thing to do? Would we have done this if Scott was still alive? How would he have felt about it?’ But this one didn’t really have that. It was a no-brainer. The conversation was more around how we were going to present it.”

Grant and Dave explained how going through Scott’s notebooks helped them realise “how much of him was in his words”, at some times “dark” but often “hilarious”.

“That’s how he wrote songs; nothing was really masked,” Grant told NME. “It was what is was. That’s what this book had to be: a real, raw and honest depiction of Scott and his writing. I got more of an understanding of the journey of the song or just of Scott. We got a better understanding of what he was going through, and that was hard a lot of the time, but it also just reinforced how special this work is and the genius behind it.

“Looking at his scribbles, you can see that some of the things he cast aside probably would have made it into most other people’s songs. You didn’t read any of that and think, ‘Oh, that’s shit’ – it’s just that it wasn’t what he wanted to say.”

Dave continued: “Obviously there’s pretty full-on subject matter throughout a lot of Scott’s songs, but there are times when a lot of his lyrics have made me laugh. When you read them so many times, one line will really hit a certain feeling on the head and the next will make you piss yourself laughing. People say his lyrics are very, very dark – and to some extent they are – but I think they also just speak of so much more in terms of emotion. That’s what I love about them. It’s the same with the illustrations.”

Grant explained how Scott “found humour in the darkest of corners” – in both his word and his artwork. “Most of his songs have some kind of visual elements to go along side it. That was the way that Scott’s mind worked,” he said. “These lyrics were so real to him that they weren’t chock full of metaphors and cliches. It’s real life, and I think it helped him a lot to visualise that. He was a visual artist before he was musician and songwriter. It helped him to complete a story.

“Some of them you look at and just see that he was a filthy fucker!” 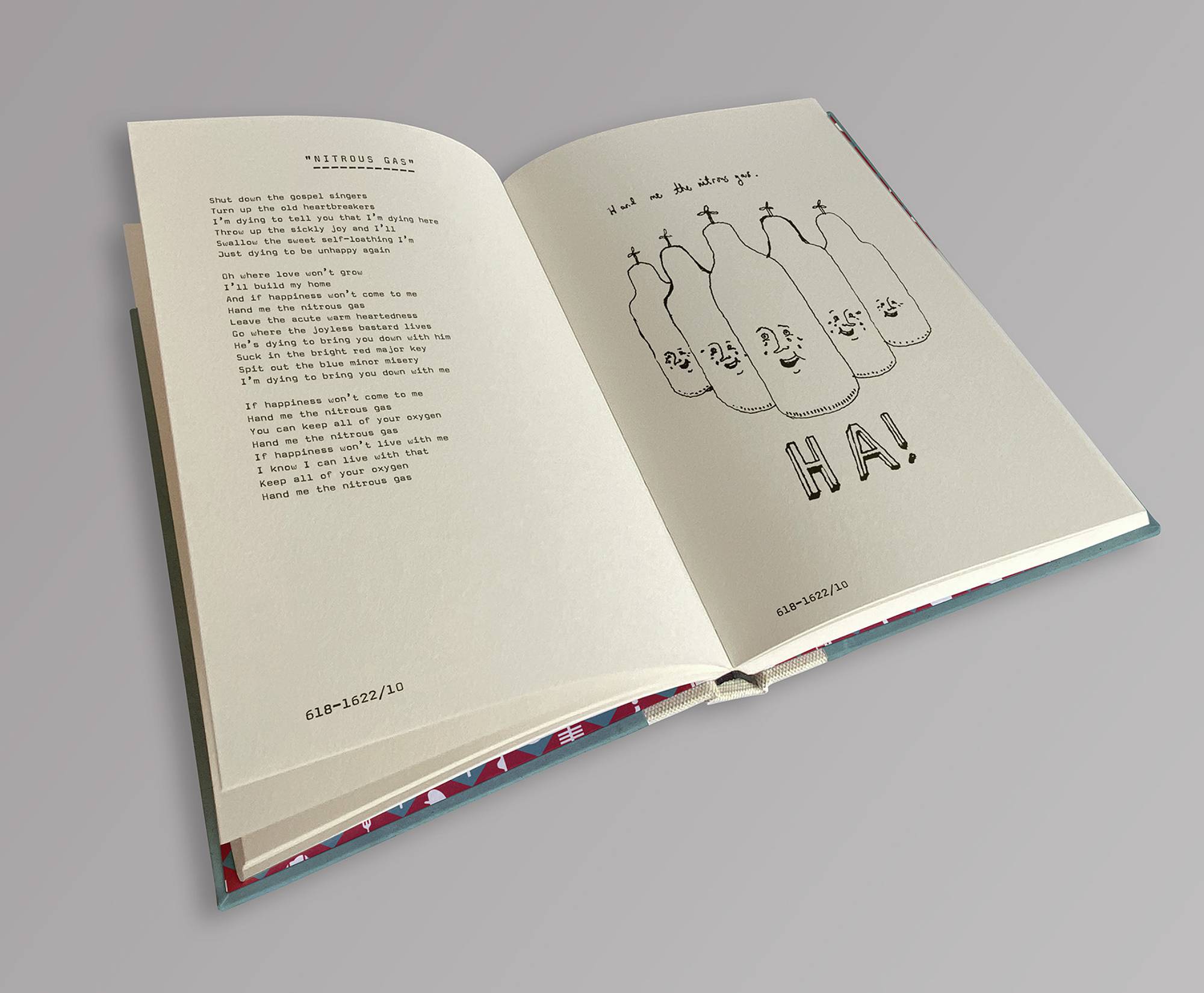 One of Scott’s sketches that has now become synonymous with the band is their multi-pronged cross logo, which is now worn on badges and necklaces by fans to show both their love of the band but also as a message for kindness and empathy.

“The origins of that was to take this motif that had started popping up in Scott’s illustrations, and just start using it everywhere,” said Dave. “There was no meaning behind it, but people could bring their own. That’s really important.

“It grew as the albums went on, and I really like that it’s taken on different meanings for different people. Now it’s the symbol that connects all Frightened Rabbit fans and their experiences. It has become the thing that we talked about, which is just this unexplainable symbol that means so much more than the little cross that it is.

“Because of people’s connection with Frightened Rabbit and the artwork, it has taken on a life of its own. Now with what’s happened through Tiny Changes [the mental health charity set up in Scott’s memory] and various other things, it is growing off the back of that.”

Grant agreed: “It didn’t mean anything. It initially came up around ’The Winter Of Mixed Drinks’ [their third album from 2010]. He had done this study in his final year of art school where he used a lot of symbolism to look at the meaning or lack of meaning behind it.

“Nobody pushed it to be what it’s become. It happened quite organically within the Frightened Rabbit community. That makes it even more special. That mirrors how the band got to what we were.”

Tiny Changes marked its one-year anniversary as a charity last year, and spoke to NME about the importance of supporting youth mental health. Last month, it launched a new fund which aims to “support innovative ideas with up to £10,000”.

“This year has been a difficult one for so many around the world, yet we feel constantly inspired by charities and individuals closer to home who are trying to make tiny changes where they can,” a spokesperson told NME. “We feel that now more than ever we need to be actively supporting those young people who have felt isolated, anxious and alone over recent months.”

The Work is out now.