Never Mind The Buzzcocks presenter Greg Davies has revealed that he’s a huge fan when things go absolutely wrong on the show, admitting he ‘likes the chaos’ with his co-stars Daisy May Cooper, Noel Fielding and Jamali Maddix.

Last year, the comedy panel show returned after a six-year hiatus, having previously featured stars including Rhod Gilbert, Bill Bailey and Noel, the only member of the old cast to come back.

Its comeback on Sky Max proved a huge success, with Daisy and Noel acting as team captains and Jamali as a regular panelist, while Greg – who formerly worked as a teacher – proceeded over their hijinks as the main presenter.

At Tuesday night’s Sky Up Next event in London, the former Inbetweeners star stopped by for a chat with Metro.co.uk, opening up about what it’s been like to work with his co-stars.

‘It probably doesn’t reflect very well on me – I just like it when things go wrong,’ he confessed.

Greg hopes the ‘chaos’ on the show will reach another level (Picture: Metro.co.uk) 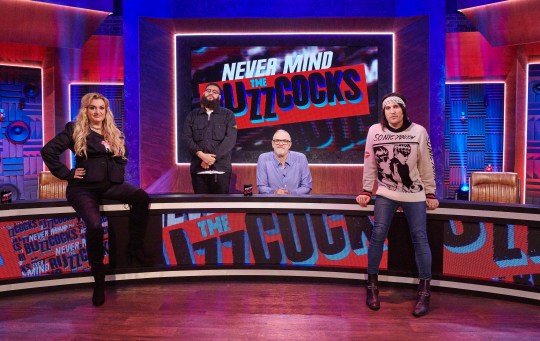 Never Mind The Buzzcocks came back with a bang (Picture: Andrea Southam)

If anyone who’s familiar with the show will remember, Greg handed out a £100 prize to contestants during the Christmas special because he was so utterly unimpressed with This Country star Daisy’s singing… but it seems he was actually enjoying it all along.

The 54-year-old presenter added that he just ‘likes the chaos’ on Never Mind The Buzzcocks, which is set to return for a new series later this year.

‘I think when we got to know each other after a couple, it was chaotic enough for me and I just think it will get more and more so as the series goes on. I hope so.’

The comedian compared his position on Buzzcocks to his role on panel game show Taskmaster, where he said ‘everyone has to obey me and be serious and have this mock respect for me’.

‘I find on Buzzcocks no one has any respect for me at all. I find it quite refreshing. So it feels like it’s a bit more of a bear pit,’ he quipped, laughing.

‘We had a lot of fun doing it and I’m looking forward to the next one.’

While Daisy’s singing might be a hot topic of conversation, she also has the power to distract with her dance moves, as demonstrated during an October episode of Buzzcocks.

She and celebrity guest Mollie King took on the challenge of dancing to Keep On Movin by Five, leaving Jamali completely bemused.

Having welcomed guests including Little Mix’s Jade Thirlwall, singer Anne-Marie and comedian Nish Kumar in last year’s series, we can’t wait to see what this year’s return will have in store.

Never Mind The Buzzcocks will return to Sky and NOW later this year.