In early 1988, My Bloody Valentine decided that they were, as their de facto leader, Kevin Shields, puts it today, “finished”. You can see how they might have come to that conclusion. They had started life in the early 80s as a Dublin post-punk band, relocated to Berlin at the suggestion of the Virgin Prunes’ Gavin Friday and become a gothy proposition inspired by the Birthday Party and the Cramps, then moved to London and transformed into what Shields calls “a conceptual band”, their childlike record sleeves concealing songs about necrophilia and incest.

The problem was, no one had got the joke; the general consensus, as Shields sighs today, was “that we were this shit Jesus and Mary Chain copyist band”. Following the departure of their lead singer, Dave Conway, they had adopted a jangly 12-string guitar style, to negligible response.

Shields says he always had a vague idea for something else, music that sounded like “the most beautiful songs with the most extremeness of physicality and sound”. He was partly inspired by hearing the live album The Beatles’ at the Hollywood Bowl as a kid in the 70s – he was fascinated by the way the band’s performance was almost drowned out by the sound of screaming fans – and partly by a gig he had seen in Berlin, where Einstürzende Neubauten had covered Lee Hazlewood and Nancy Sinatra’s Sand while “blowing things up, getting singed, all sorts of things that were kind of a bit scary”. Shields had come close to capturing what he was after a couple of times on My Bloody Valentine’s 1987 album Ecstasy – he even buried one song, Clair, beneath a sample of a Beatles audience’s screams – but no one had noticed: Ecstasy had sunk almost without trace.

And so My Bloody Valentine – who had eventually solidified with the drummer Colm Ó Cíosóig, the bassist Debbie Googe, and the singer-guitarist Bilinda Butcher – embarked on what was supposed to be their final tour with the intention of playing “really fast and aggressively … like a band killing their own songs … tearing it all to pieces, really”. They turned everything up as loud as it would go; one startled audience member compared the experience to “standing in a wind tunnel”. Equally startled was Alan McGee, the boss of Creation Records. He had previously considered them “pretty much a joke group”, he later recalled, but found himself mouthing the words “for fuck’s sake” to a friend as they played. Afterwards, he offered them a record deal.

What happened next is the stuff of indie legend. Shields borrowed a friend’s Fender Jazzmaster guitar and discovered that, if he applied a digital delay effect while holding the tremolo arm, it created a uniquely woozy, disorientating sound that became his trademark. The subsequent single, You Made Me Realise, with its unexpected burst of howling, beatless noise midway through, wasn’t just rapturously reviewed, but hugely influential. Within months, John Peel listeners would be struck by the sound of other bands attempting to copy My Bloody Valentine’s warped guitars and half-heard, murmured vocals; by the following year, there were enough of them to warrant a subgenre, mockingly called shoegaze.

But none of them really sounded like My Bloody Valentine, because, with each release, Shields changed the band’s sound. Having finally succeeded in nailing the music in his head, he kept shifting it in unprecedented directions. Their 1988 album Isn’t Anything bore the influence of hip-hop on the opener, Soft as Snow (But Warm Inside), while you would be hard pushed to find anything before it that sounded like the alternately disturbing and elated wall of sound on All I Need. The Glider EP, in 1990, stirred dance music into the mix. By the time of the 1991 EP Tremolo, My Bloody Valentine were attracting laudatory acclaim (Brian Eno claimed it “set a new standard for pop”) and total bafflement: stories of buyers returning Tremolo to the shop, convinced there was something wrong with the record, that it couldn’t possibly be supposed to sound like that, are legion.

“Because we’d had a good few years of not being particularly respected, it wasn’t like we were delighted,” says Shields of the band’s sudden ascent. “We were kind of cynical, like: ‘Yeah, yeah, OK.’ I realised that I was already in my own universe, but I couldn’t explain it to anyone and I wasn’t going to try, either. I realised it doesn’t really matter what people are saying, we’ll just see where it goes.”

The police arrested our tour manager, questioned him and let him go and we were still playing You Made Me Realise

Besides, it is not as if their rise to a position of esteem and influence was without its problems. For one thing, there was their desire to play live at ever more punishing levels of volume – to give people, as Shields puts it, “an amazing physical experience, a real transcendent experience” – or indeed to extend the passage of noise in You Made Me Realise until, occasionally, it lasted for 45 minutes.

Shields has a habit of making it sound like the most reasonable thing in the world one minute – bands are loud, he shrugs, but most gigs are “laughably quiet … something you’re consuming, not being consumed by” – then admitting that My Bloody Valentine reached a point where they were playing at such volume that they were causing structural damage to venues. “Chunks were falling out of the ceiling. It sounds like an exaggeration, but I’m serious – we were really concerned that eventually some roof was going to fall down,” he says. “It was a matter of time before a serious accident happened.”

Not everyone was impressed. There is a bootleg recording circulating among fans of a late 80s London gig degenerating into chaos – the sound man has given up and fled the building. Shields says that was one of the less extreme reactions. “At one gig, a butcher was literally chasing my sister with a cleaver – he wanted to chop the cable because it was shaking his shop so much when we were doing You Made Me Realise. The police turned up and arrested our tour manager during You Made Me Realise. They arrested him, put him in the car, questioned him and let him go and when he got back we were still playing it. Countless, countless situations.”

Then there was the mythology that developed around the band. In truth, they had always been faintly mysterious, with their noncommittal approach to interviews and their largely inaudible lyrics. Shields says “30-50%” of the guesswork on online lyric sites is “completely wrong, sometimes in really key areas. Part of me really likes the folk song element of that – people changing things, having their own version of reality – and part of me thinks I should go through them like a teacher, correcting them.”

Genre-bending … watch the video for Soon.

But the mythology really grew during the protracted sessions for their 1991 album Loveless – which, depending on whose version of events you believe, nearly bankrupted Creation or did nothing of the sort – and grew to mammoth proportions when, in the wake of Loveless’s success, My Bloody Valentine signed to a major label and then failed to release any music, bar a couple of covers, for the next 21 years.

Shields became almost as famous for missing deadlines as he did for making music. You could, if you were so inclined, infer a lot from the moment during our conversation where I point out that we have passed the hour allotted for the interview and Shields waves it away with an airy: “If [the record company] said an hour, that’s just … a guideline.” Some of the more lurid rumours suggested Shields had driven himself up the wall attempting to follow Loveless, an album that regularly appears in lists of the greatest records made.

Calling from his home in Ireland, Shields does not sound much like the damaged latter-day Brian Wilson of popular myth. He is friendly and chatty, funny and engaged and occasionally keen to puncture such myths. At one point, he reels off a string of songs from Loveless – an album frequently heralded as utterly without precedent – and cheerfully tells me from whom they were ripped off. Neil Young, mostly, although What You Want is apparently a homage to the Cure’s Just Like Heaven. “I had the pleasure of telling Robert Smith that once and he looked at me like he didn’t believe me,” he laughs. 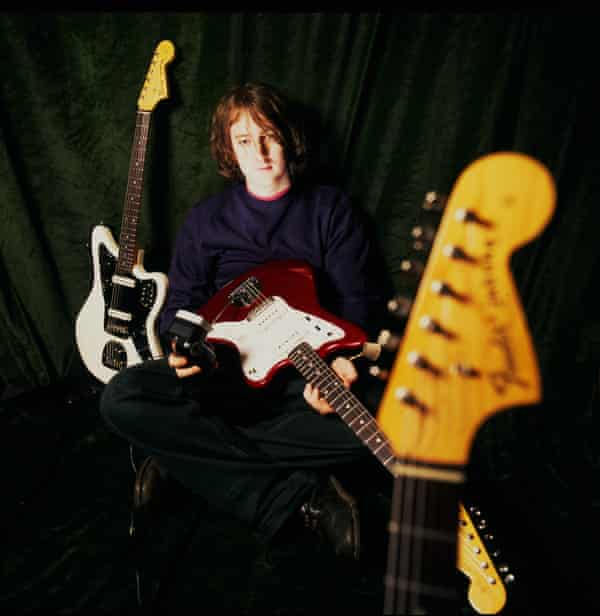 The man behind the myth … Shields in 1991. Photograph: David Corio/Redferns

With the switch apparently more off than on, the band quietly split up. Shields eventually gave up, too, joining Primal Scream and dabbling in remixes and film soundtracks. My Bloody Valentine eventually reformed for a succession of live shows in 2008, which prompted him to return to Loveless’s unfinished follow-up; m b v was eventually released, virtually without warning, five years later.

Astonishingly, given My Bloody Valentine’s continuing influence over subsequent artists – you can hear their echoes not just in alternative rock, but also in electronica and the more abstract fringes of hip-hop – it frequently sounded as unprecedented in 2013 as You Made Me Realise had in the late 80s.

Since then, there has been nothing in the way of new music, although they have signed a deal with Domino, which reissued their back catalogue from You Made Me Realise onwards this year, and Shields insists a new album is imminent. Or possibly a double album. Or possibly an album and some other tracks (“I don’t feel I’ve got to make this grand statement in one go; I can get away with just putting stuff out”). But definitely something, he says; they are booking in time at the vinyl pressing plant now.

The thing is, he says, he always intended My Bloody Valentine to release more music than they have. “I write a lot of songs, and they’re quite good, and I quite like them, and I’m thinking: ‘Well, I’m sure if I put them out I would be at least as consistent as anyone else, but …’” He pauses and sighs. “When a band releases an album and it’s not really good, I feel bad. But when music makes me feel good, it’s, like, the best; there’s a special, magical thing that happens that’s not easy to compare. And that thing becomes the only thing I’m interested in. It has to have that effect on me. If it doesn’t have that effect, then I don’t want to be part of it.”