Who’s got the coolest career in Hollywood right now? Easy. It’s Dave Bautista. The former WWE wrestler, 54, has killed us as Guardians Of The Galaxy’s Drax, played a rock-hard Bond henchman in Spectre, and been director Denis Villeneuve’s go-to guy in Blade Runner 2049 and Dune. Now he’s starring in M. Night Shyamalan’s latest thriller, the gripping Knock At The Cabin, playing Leonard, a teacher who arrives at the door of three holidaymakers with a mission like no other.

Hey Dave! Do you feel like Leonard is a very different character for you?

“Ha-ha! I think he’s definitely different than any other [character] I’ve ever portrayed. And it was the complete attraction. I’ve sought after these roles for years and years, looking for a character who is layered in emotion and grounded and real and gentle. Other than these kind of action characters that are just so over the top and so larger-than-life. I never really wanted to pursue those roles. They came my way and I took them and I did the best I could.”

Did you find the script a real page-turner?

“Yes. By the time I was done reading the script, it was so late, I didn’t want to call Night but as soon as I woke up the next morning, that was the first thing I did. I was having anxiety because I wanted to pick up the phone and talk to him so bad. But I called him and immediately said, ‘What do I have to do to get this role? This is crazy!’ And he said, ‘No, you don’t have to do anything. I want you for this role.’ And I called my agents and said, ‘I don’t care what it takes, get this deal done. This is career-changing for me.’”

Dave Bautista in ‘Knock At The Cabin’. CREDIT: Universal

Did you have any input into Leonard’s look? Do you normally wear glasses? You look very sexy in them!

“Thank you! No, I do wear glasses. I’m pretty blind. So I look for ways to kind of strip away my physicality. And it’s weird for this role saying that, because I’m probably bigger in this role than I have ever been in any other role. But it’s things like that, they soften my demeanour, they make me more relatable, they make me more vulnerable, especially glasses.”

Did you have fun with your co-star Rupert Grint?

“I did! It was so hard not to talk to him about Harry Potter! I had to keep in mind that he’s probably so tired of people asking him about Harry Potter. I just didn’t want him to feel trapped there with me – this big six-foot-four guy leaning over and badgering him about Harry Potter! But how can you not look at Rupert Grint and want to ask him these questions? Because I’m such a fan. He’s so talented. I’m sure in some way, his career has been like mine, where he’s been judged a certain way. A lot of people will only ever see him as Ron Weasley. And it’s just a shame because he’s so much more than that.” 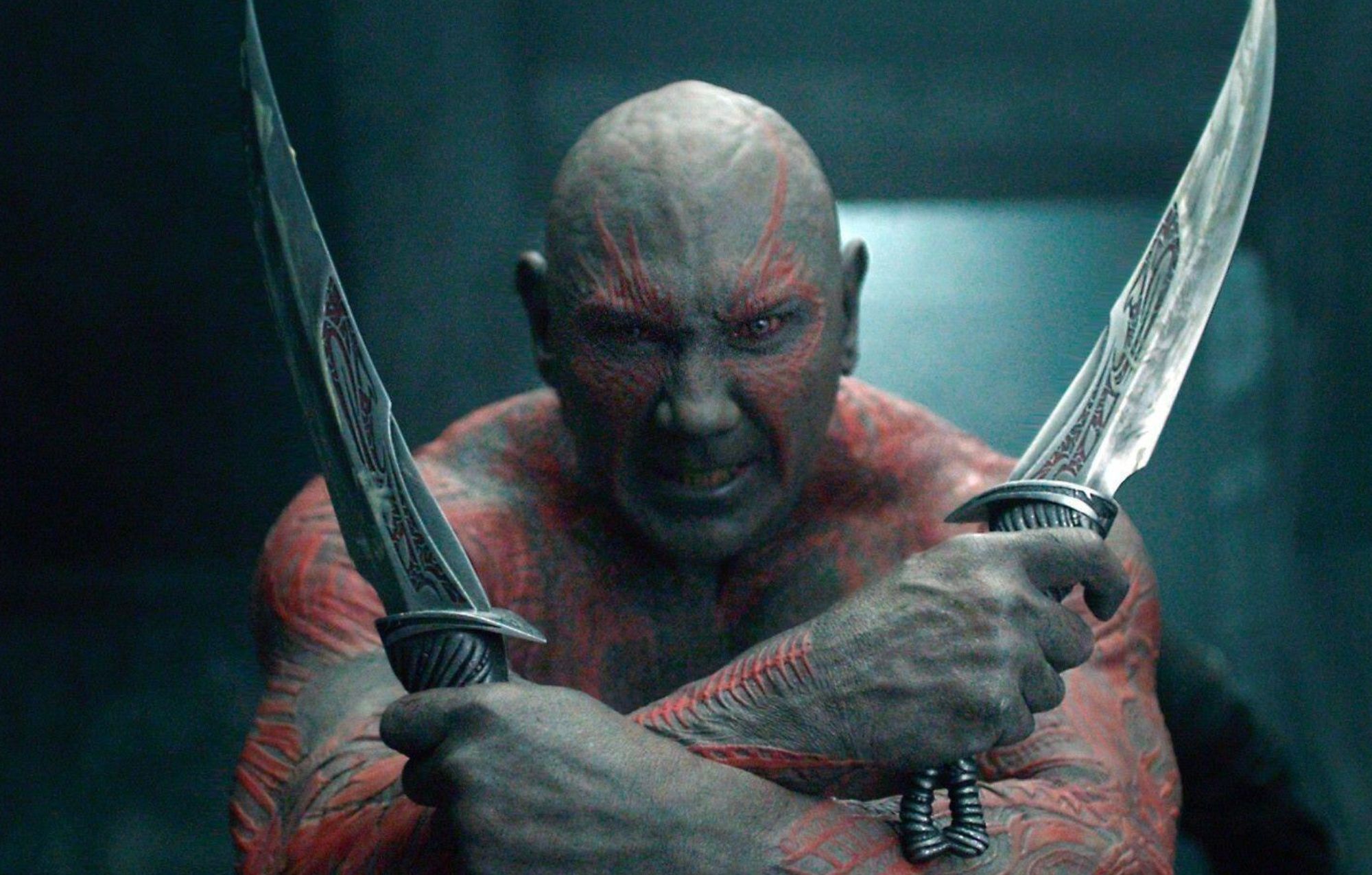 Dave Bautista got his big break as Drax in ‘Guardians Of The Galaxy’ (2014). CREDIT: Alamy

I guess it’s similar for Daniel Craig too?

“Yes. I worked with him on James Bond, and that was one thing, but to see him transform himself into Benoit Blanc for Glass Onion… it’s just like, ‘Wow! How talented!’ You’re almost like, you know, fuck that guy for being so talented!”

You’ve got Guardians of the Galaxy 3 up soon. Are you ready to say goodbye to Drax now?

“It’s the right time, and it’s weird. It’s a very bittersweet thing. I’ve done seven films as Drax. I don’t think there’s anything else I can contribute as Drax. I’ve come full circle with that character. It’s just hard because there’s so many great memories and the people that I’ve worked with on those films, I love them dearly, they’re family to me… I need to move on and there’s other things I want to accomplish with my career.”

Finally, how nasty are you going to get in Dune Part Two?

“Oh, so nasty! I can’t even express, man! I even hate my character. He’s just so hateable. In like the best way! As far as performance goes, it was so great to be able to really just dive into this guy because you felt little hints of him in the first one. But I didn’t feel unleashed until the second one. I just went for it. It really felt good. And the whole script is great. Even the film feels so much more intense. And just so cutthroat and political. The first film was just such a great introduction. But the pacing was slower, and it just picks up so much more in the second film.”

’Knock at the Cabin’ is in cinemas now

“What Happened to Charlie in ‘The Whale’ Ending?”

“What Happened to Charlie in ‘The Whale’ Ending?”