Monsters at Work is a charming new sequel series to Pixar’s Monsters, Inc. on Disney Plus, set directly after the events of the 2001 film and exploring the company’s sudden pivot from ‘we scare because we care’ to ‘it’s laughter we after’.

While the series welcomes back John Goodman as James P. ‘Sulley’ Sullivan and Billy Crystal as Mike Wazowski, who are placed in charge of the company as it struggles with its new identity, it also focuses on a whole new roster of characters who work in the Monsters, Incorporated Facilities Team (MIFT).

The swing from capturing screams to laughs is neatly incorporated by keen young graduate Tylor (Ben Feldman, Superstore’s Jonah), a Scarer so promising he is recruited directly from college after he breaks Sulley’s training record.

However, his first day coincides with Monsters, Incorporated’s big change and so he gets shunted sideways into the misfits that make up MIFT.

Monsters at Work is not a pure Pixar product; it’s a Walt Disney Television Animation production that employed some Pixar workers as well as unused concept art from the film. There is a consequent drop in visual richness, but it’s still a handsome CGI animation.

The series’ main challenge is juggling the screen time between its two big star draws and the new ensemble cast of characters it introduces satisfactorily, and on the whole Monsters at Work manages it well. 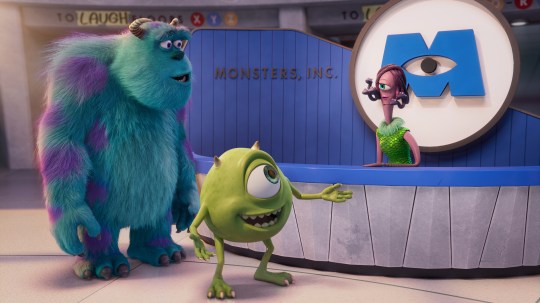 Old favourites are back (Picture: Disney)

Although things get off to a slow-ish start for Mike and Sulley once they’re installed in the top office, the second episode gives a bit more breathing room for everyone’s favourite one-eyed monster, though Sulley is a little lacking in anything meaningful as of yet (only the first two episodes were available for preview so this could change).

Most importantly, a cast of likeable (and delightfully unlikeable) personalities populate MIFT. While Tylor represents the popular but ‘normal’ straight guy, he has a whole host of fun new colleagues to bounce off, from super-enthusiastic Val (US Office’s Mindy Kaling, who also voiced Disgust in Inside Out) who appoints herself his BFF from college, despite Tylor barely remembering her, to Happy Days icon Henry Winkler’s Fritz, the excitable but odd department boss who is desperate to be liked.

There’s also the mysterious Banana Bread (Dee Bradley Baker), who no one can understand as he only communicates through mouth farts (one for the kids) but brings in baked goods for his workmates every morning.

Even better are the more cynical MIFT members, including Rosie/’Cutter’ (Alanna Ubach), a slightly dark and very deadpan worker who never shies away from detail and provides a fair number of the chuckles. 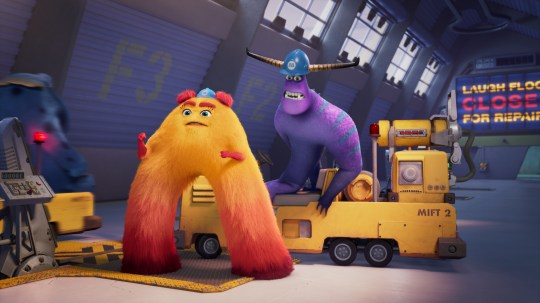 Val adopts Tylor as her best friend, whether he likes it or not (Picture: Disney) 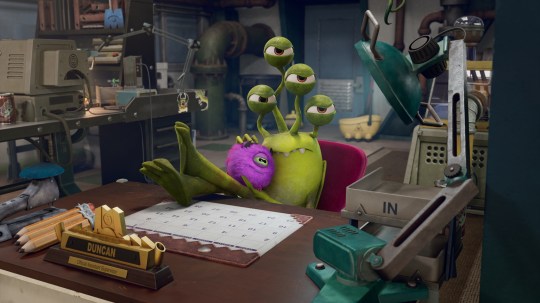 Slimy Duncan (Lucas Neff) is ambitious and recognisable to many adults as the colleague that would step on your neck to further their career. His discontent is delicious, and animators have clearly had fun with him, from giving each of his four eyes an individual hard hat to providing him with a furry pet accomplice (sorry, ‘emotional support animal’) with whom he can sit and stew in the corner.

Monsters at Work is a neat reminder of how Disney, when it keeps things relatively simple and stripped back, is still a master at providing family entertainment. The series has colour, gags and fluffiness for the kids and, let’s be honest, Duncan for the adults.

A cute series that could progress nicely into further episodes, Monsters at Work is a gently amusing production that provides more nuance and charm than expected.

It might be 20 years since Monsters, Inc. but the premise hasn’t aged a day.

Monsters at Work premieres on Disney+ on 7 July.