In early 2020, when Dave was making British history by triumphing at both the Brits and Mercury music prizes, the equivalent awards in France were making headlines for all the wrong reasons. That year’s Victoires de la Musique featured no headline prizes for a black or Arab rapper. “Domestic rap has become the soundtrack to a national identity crisis,” claimed one critic in this newspaper. Where the UK rapper was crowned for his celebration of black Britishness, French hip-hop was still fighting for the right to be seen as French at all.

It is a crisis that rising contemporary art star Mohamed Bourouissa knows from the inside. As he drily puts it: “France has got some catching up to do.”

His latest work hopes to have a hand in that. When we speak on the phone, Bourouissa is in full planning mode. His first large-scale solo show in the UK opens at Goldsmiths CCA this month. Lockdown saw a stopgap studio in Pantin, in the north-eastern suburbs of Paris, become a permanent workplace. There he has two offices. One for the teams who man his large-scale projects. “And another,” he says, “where I can be alone and dream.”

His mobile starts playing up while we speak and he has to plug it in. “Strangely,” he says, “electricity – the electrical impulses that living things produce – has been on my mind a lot.” Last year, for Sydney Biennale, he made a piece entitled Brutal Family Roots, that riffs on this idea in a luminous way. He’d discovered that the bright yellow-flowering tree that he knew from his Algerian childhood as the mimosa was in fact a native Australian species known to the Indigenous Wiradjuri people as the garal. Its spread across the globe was colonial history writ large, in golden-hued pollen.

Rap music too has travelled the world, taking root in new locales of urban hardship and resistance. So Bourouissa worked with a sound designer and two Australian MCs to transpose into music the frequencies that the trees emit. Visitors to the resulting installation lay on wall-to-wall yellow carpeting, amid saplings potted in steel drums that were hooked up to speakers, over which the rappers’ bars about travelling on the wind and crossing the water mixed with the trees’ own tunes. 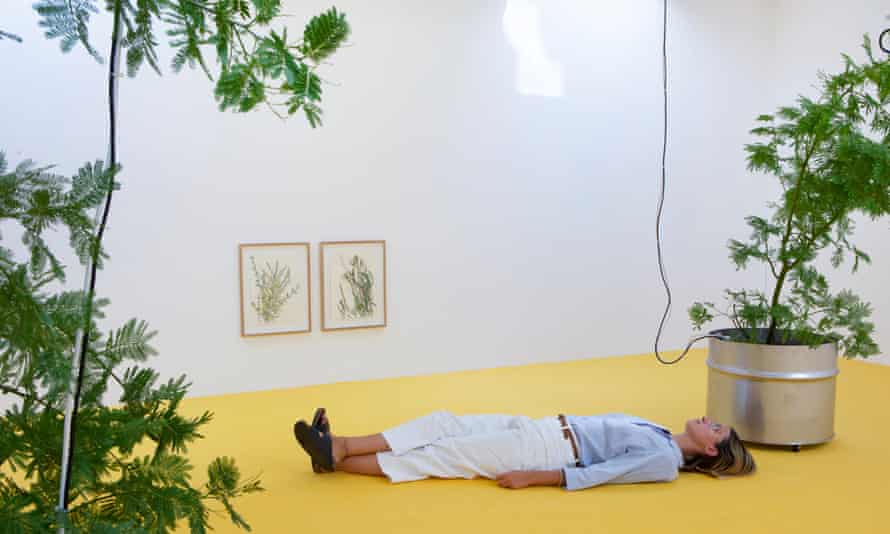 Bourouissa was born in Blida, northern Algeria, in 1978. He moved to France with his mother when he was five and she was looking for work. Growing up in the banlieues, he didn’t get on too well at school. He did technical drawing at college, then fine art at university (and a lot of graffiti on the side). A friend introduced him to photography, which he pursued at the fabled École nationale supérieure des Arts Décoratifs, before doing a postgrad stint at the Fresnoy research centre in Tourcoing. There he started working with film.

“It’s all been about chance encounters. I didn’t come from an art background. To begin with, I didn’t even understand what being an artist meant. I learned it all on the job, so to speak.” Going to art school meant access to knowledge, materials and, with the camera, an intuitive tool with which to reconcile his two worlds. “Our lectures,” he says, “told a very white, western-centric tale of art history – minimalism, abstraction, American abstract expressionism, conceptual art. And I thought, Ben non, I want to talk about what surrounds me and my friends.’” 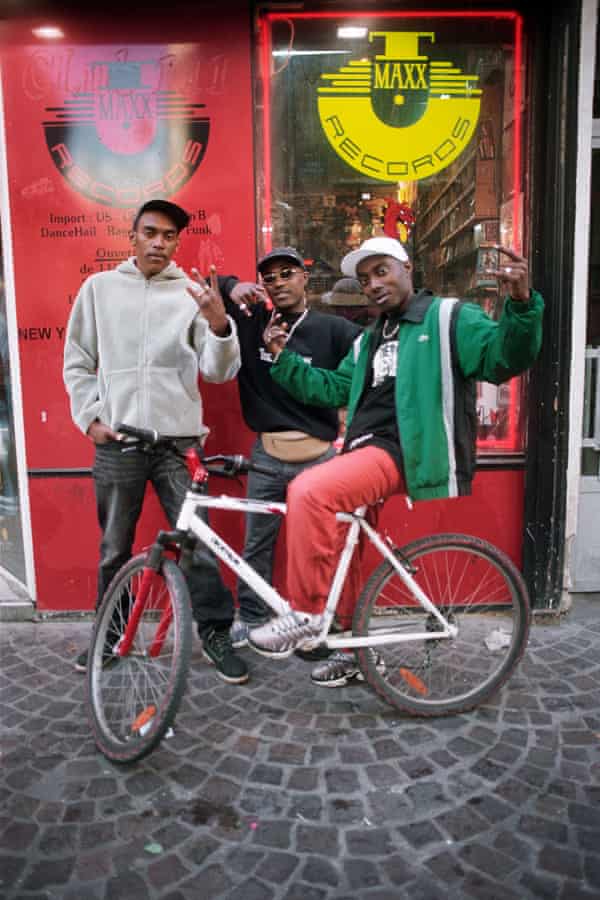 ‘French hip-hop was starting to come to the fore’ … from the Nous Sommes Halles series, 2003-05. Photograph: Courtesy the artist and kamel mennour, Paris/London

Inspired by early hip-hop documentary photography out of Harlem and Queens, Bourouissa headed to Les Halles shopping mall in Châtelet, central Paris, and photographed kids in matching Lacoste tracksuits and bucket hats. “It’s quite funny to think that streetwear is so trendy now,” he says. “Back then it was just a subculture. [French] hip-hop was really starting to come to the fore. I wanted to make it visible.” It wasn’t the clothes that weren’t being seen, but the people wearing them. As he told the late curator Okwui Enwezor in 2017: “Twenty years ago in France, there were not a lot of images of Algerian or black people in books; if there were, they were more sociological or ethnographic in nature. It was not about portraying their essence.”

Much has been made of the knack Bourouissa has for consistently honing in on overlooked communities, not least in his stellar series, Périphérique (Peripheral), from 2005 to 2009. Here he restaged visceral scenes inspired by historical painting in striking banlieue settings. Eugène Delacroix’s Liberty Leading the People became young men in hoodies and beanies holding a flag on a flat-roofed garage at night, a high-rise tower glinting in the background.

His magnificent 2017 project, Horse Day, meanwhile, started out as a film about a group of black cowboys in Philadelphia (the Fletcher Street Urban Riding Club) and led to a collaborative celebration of a hidden horse culture with ancient roots.

And then there’s the 2020 sound piece from which the Goldsmiths show takes its title: HARa!!!!!!hAaaRAAAAA!!!!!hHAaA!!! The word is based on “hara”, the Marseillais version of “Five-O”, that lookout cry used to alert drug dealers to police arrivals.

By focusing on the hyperlocal in this way, Bourouissa shifts our attention away from any established centre (a nation’s capital; a dominant culture) and points instead to how the people in such marginalised communities are not, in themselves, marginal: where they are is their centre. 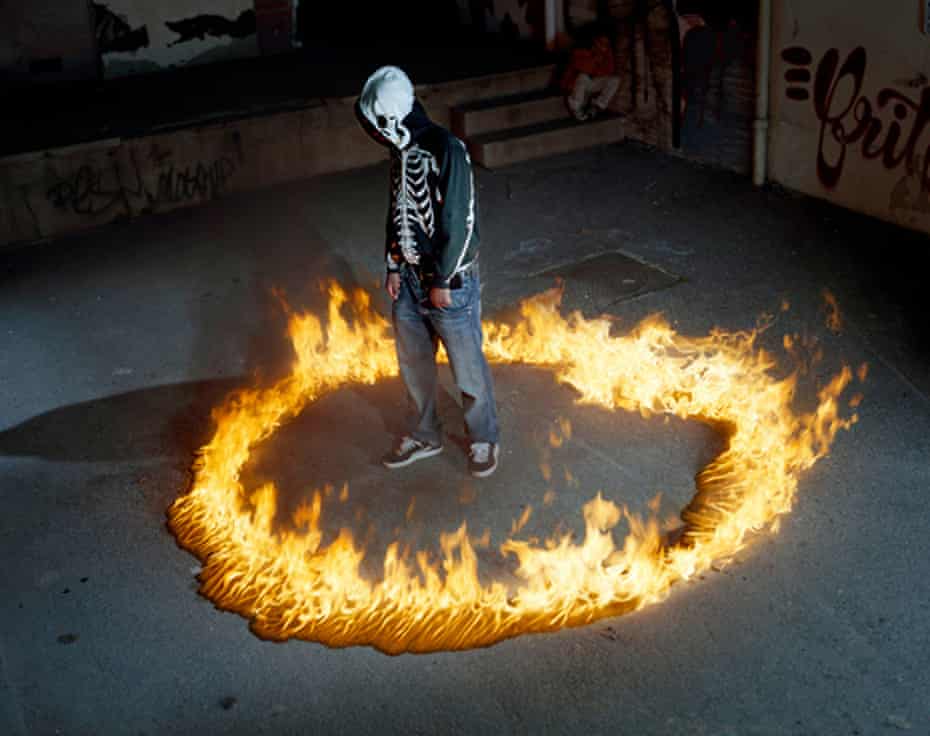 At the centre … Le cercle imaginaire, 2008, from the series Périphérique. Photograph: Mohamed Bourouissa. Courtesy the artist and kamel mennour, Paris

What he’s really interested in, though, is what lies beyond that centre-margins dichotomy: “I’m thinking about how things circulate, how they rub up against each other, and how that creates space.” Seen this side of the 2020 protests – during which black riding collectives memorably showed up on BLM marches – Bourouissa’s Horse Day is altogether more profound.

In the midst of a global pandemic and an escalating economic crisis, Bourouissa is keenly aware of the impact any show might have. “Brexit really has happened now. The health situation is disastrous. I can’t just come in, flaunting big expensive pieces. Any struggling young artist will be like, what’s this French guy doing?”

Does he mean like Jeff Koons and the tone-deaf bouquet of shiny balloon tulips he gifted Paris in late 2019?

“I didn’t dare say it,” Bourouissa replies. “But that’s not to say I don’t like Jeff Koons either. I love his work; it speaks to an era.”

Bourouissa is certainly speaking to his own. When he was invited to take part in the 2018 Liverpool Biennal, he wanted to create a healing garden in Toxteth, a space of resilience inspired by the gardens that psychoanalyst Frantz Fanon had developed during his time working at the psychiatric hospital in Blida. So he headed back to Algeria, to interview one of Fanon’s former patients. Fanon of course went on to become an influential anti-colonialist writer, and Bourouissa’s garden idea resonated with other participants in the biennal. An African studies scholar asked if she could plant seeds (of okra and hibiscus) that related to slavery.

In France, however, Fanon’s work is only just beginning to find an audience. “He was this important French thinker, who was completely cancelled, because at one point [during the Algerian war of independence] he sided with the Algerians.” As someone who bears those histories in his bones, Bourouissa is peeling back the layers.