Milton is one of the most recognisable comics in the UK (Picture : REX/BBC)

Comedian Milton Jones, who has been a regular on Mock The Week for 13 years, has reflected on how the programme has diversified since it began in 2005.

Milton, 58, has been a recurring guest panellist on the BBC panel show for over a decade, which Dara O’Briain fronts.

Fans still enjoy the series, which sees some of the UK’s best-loved comics the chance to offer up a satirical swipe at the news and world events of the week.

However, with Milton having seen Mock The Week evolve over recent years, he admitted the programme is better now that the line-up of talent is more diverse.

He recalled to Metro.co.uk how the show has changed from often being ‘seven white blokes’ when he started, to become much more ‘balanced’.

Reflecting on his time as part of the programme, he said: ‘It’s scary. I’ve been doing it for 13 years now. Occasionally, I’ll trip over a repeat on Dave, and go “Oh, I look so young!” 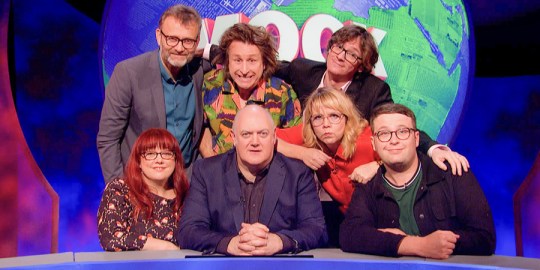 ‘I’ve never found it an easy show to do. I like all the people on it. But if you think you can turn up and have a chat with your friends, forget it. You got to have things to talk about. While you don’t get exactly the questions, if you’ve seen the news in the last week, you know what’s going to be happening. You need to do your homework.

‘Two-thirds of that won’t be used in the edit. I mean, if you’re lucky and do it again, you’ll find the same subjects coming back and maybe you’ll be able to use it some other time.

But he went on to add: ‘What does look odd, is to see an episode from 13 or more years ago, and it’s seven white blokes.’

Milton noted that when he started the programme, there were ‘far more male comics than female comics’ but that this is ‘much less the case now.’

Other male comedians to have dominated the show over the years include Hugh Dennis, Andy Parsons, Russell Howard and Ed Byrne.

‘In the beginning, the producers would always say, Look, there’s not so many [female comedians], inevitably there are gonna be more men and that is no longer true, so that’s good,’ he shared.

He recalled the time his wife Carol came to watch him film Mock The Week for the first time and told him there was ‘too much testosterone’ in the room.

’It was true!’ Milton said. ‘People were pulling each other back and trying to top to each other all the time, and have the last word. For me, I mean, I tend not to play the game so much anyway, but there’s been a calming influence, from just balancing it out.

‘I think Dara and everyone would say, it’s a nicer show to do now.’

The funnyman, who is famous for his brilliant one-liners and deadpan humour has been on and off the road for his Milton: Impossible tour in recent months.

Earlier this year, he added 35 extra dates to the schedule, which he began touring pre-Covid, joking that it feels like it started ‘about 100 years ago.’

‘You just had to take what you were given in terms of dates because it’s there all over the place.

Mock The Week airs on BBC Two and BBC iPlayer and tickets for Milton’s, Milton: Impossible tour can be bought here.