Is this awkward for Ashton Kutcher? Mila Kunis and Demi Moore appear side-by-side in a new commercial for AT&T.

The minute-long video shows the stars, who have both been married to Kutcher, 43, at a high school reunion when a superlative for “most admired alum” is announced. Kunis, 38, is prodded to go up on stage.

“Oh shut up,” Kunis says, rolling her eyes while smiling. “This is so embarrassing. Guys, don’t make a scene!”

Meanwhile, at Moore’s table, the 59-year-old tells her table that she couldn’t possibly win. “There’s no way it’s me … Was that good acting?”

Both actresses walk up to the stage as the category is being announced and make awkward eye contact as they reach the podium — only to realize that neither one of them won.

“It’s Anna Gomez, our first gigillionaire,” the presenter says. “With AT&T Fiber, Anna’s got the fastest internet with hyper gig speeds, so her family has crazy fast gaming and they stream movies in 8K.”

Though Anna watches “so many movies,” she doesn’t recognize either Kunis or Moore, who save face by handing the winner her trophy and flowers.

“I had no idea that we went to the same high school,” Moore tells Kunis.

“We have a lot in common,” Kunis says.

While the high school reunion was fake, they two really did go to the same California educational facility at different times. Moore dropped out in her junior year in the late 1970s while Kunis graduated in 2001. 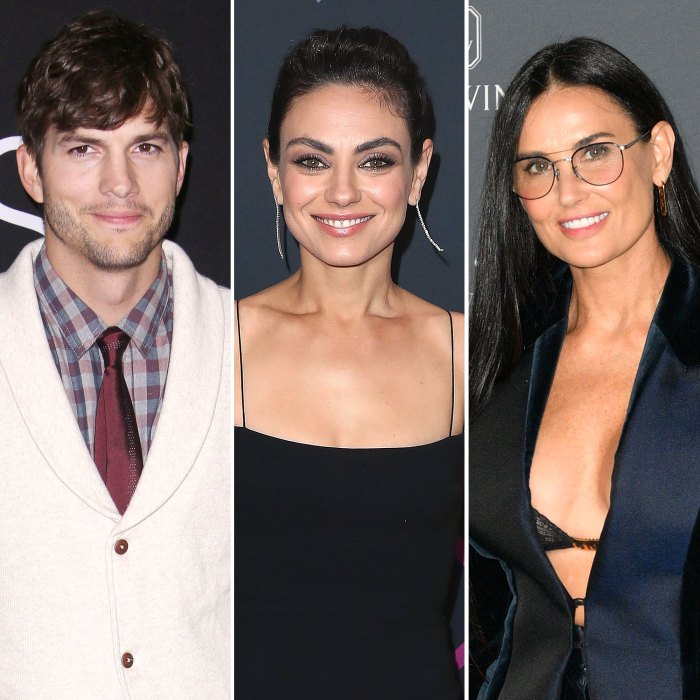 “It was during my first collaboration meeting with AT&T that we discovered Demi was also a Fairfax High alum,” Kunis explained to Entertainment Tonight in an interview published on Monday, January 24. “I thought it would bring humor and laughs to what was already a great ad. I reached out to her and was so delighted she jumped on board.

Shortly after their 2011 split, Kutcher and Kunis started dating. The That 70’s Show costars welcomed daughter Wyatt in October 2014 and married in July 2015 in a hush-hush ceremony at The Secret Garden at Parrish Ranch in Oak Glen, California. Kunis gave birth to son Dimitri in November 2016.

Though Moore and Kutcher have been divorced for years, the Charlie’s Angels: Full Throttle star brought their romance back into the spotlight with her 2019 memoir, Inside Out. She revealed that they’d experienced a miscarriage and several unsuccessful rounds of fertility treatments. The New Mexico native also divulged stories about their sex life, revealing threesomes and alleging Kutcher was unfaithful.

“It’s a chapter of his life that he has moved on from,” a source told Us Weekly in September 2019. “He’s in a very different place now. But he knows without that experience and relationship he wouldn’t be where he is or who he is. He had to go through it to get to this place and he’s grateful for it.”